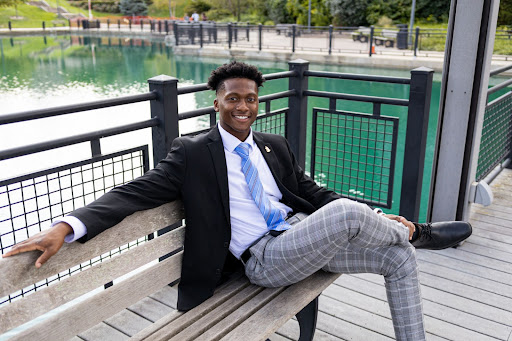 Gallery|3 Photos
Emory Davis
Daniel Myers has taken on the role of SGA President and represents students on NKU's Board of Regents.

Senior Daniel Myers has all the right tools to rebrand and rebuild NKU’s Student Government Association. The sports business and event planning and marketing double major stepped into the role of SGA President this year amidst an organization that is struggling for involvement.

Myers and Vice President Jaelynn Gentry won the vote of NKU students by a recognizable margin last spring, and the president is ready to embrace his moment to make change.

After joining SGA last fall, Myers quickly excelled to a position of leadership. Former president Aliya Cannon found herself with a vacant vice president spot after Chris Roat stepped down from the position. Upon leaving, though, Roat recommended Myers to take his place.

“When [Roat] left, he actually recommended me to take his position as vice president. At the time I didn’t know this; I was just a senator at the meetings, but they expressed to me that I had been kind of recommended for the job. I was like alright, I’m going to step into it,” Myers said.

With this experience under his belt, Myers felt confident enough to take a leap of faith and run for president. His focus was on improving the experience of students and seeing fellow Norse embrace their goals at NKU and beyond, he said.

For the Louisville native, NKU was not necessarily on his radar as a first choice. After visiting the university his sophomore year, and taking a liking to the Campus Rec Center, he continued to look into other options. When it came time to make the college decision, though, he found that NKU had all the right elements: affordability, community and academics.

“I liked the sports business [at NKU], and I liked the location with Cincinnati right there and how they have the major teams: the Bengals, the Reds,” he mentioned.

As a freshman, Myers recalled looking at photos of high school friends at their respective colleges, enjoying football games and becoming involved. While the grass is always greener on the other side, he said, he remembers feeling left out and disappointed. He sought to get more deeply involved but was struck by the pandemic the spring semester of his freshman year. Feeling like a year of the university experience had been robbed from him, he made a point to root himself in organizations and opportunities.

In addition to SGA, Myers is a member of the Pi Pi chapter of Kappa Alpha Psi fraternity, Norse Leadership Society and African Student Union.

Myers considers himself an energetic and outgoing person who doesn’t like to take himself too seriously. SGA Secretary of Involvement Miles Stokes seconded this notion, saying Myers always keeps the energy up at meetings and engages with others.

“Daniel is a very energetic and passionate person by nature. Everything he touches he leaves a little better than it was,” Stokes said.

Serving as president of the university’s student government comes with big responsibilities, though. SGA Advisor and Senior Director for Student Engagement and the Student Union Sarah Aikman reminded students that Myers’ position is two-fold; while leading the student government and hosting weekly senate meetings, he also represents NKU students on the university’s Board of Regents.

“I would say he easily puts in 20 to 25 hours a week in his role as SGA President representing the students here at NKU. He also serves on the board of student body presidents, which is all the students from the public institution in Kentucky,” Aikman said.

This year’s student government is in a rebuilding process, according to advisor Aikman. The organization must reach 25 senators in order to pass quorum, which includes any resolution they would like to see come to order.

Last year, the organization only reached this minimum number once, right before the end of the fall semester. Not meeting this quota prevents SGA from serving their purpose, which is to enact change. This is why Myers is so passionate about recruiting new senators as well as retaining their current members.

While the new school year came with only two senators of the necessary 25, Myers says that number has already increased and is projected to continue. An influx in diversity amongst representation is also a theme of this year’s SGA among general members and the executive board.

“I feel like bringing all this diversity is good because there’s so many different communities on campus that need to be represented. Right now, the amount of communities that my e-board touches – those perspectives that are being brought in I really feel like make a difference in what we’re able to do in terms of changing the student experience. You don’t want someone to go under-represented. I want more senators from Greek life, international students, each of the colleges, more SOTA students. I don’t want somebody to speak for me that doesn’t know my experiences,” Myers said.

Myers also wants to work diligently to rework the perception of SGA. He is aware the perception from students hasn’t been the best in the past and wants to remind members they are in their position to listen, learn and act.

Secretary Stokes agreed with Myers’ focus, saying the goal was to rebrand SGA so that the organization would again be something that was highly spoken of and on students’ radar for making change. While it is one thing to throw out this proposition, Myers is taking the steps to actually act it out, Stokes said.

Looking toward the future, graduation is the biggest goal for Myers, who is still considering what the following steps will look like. Pursuit of a master’s degree and graduate assistantship may be in the cards, but he doesn’t want to wish away his time in the sun too quickly.

“My most immediate goal is making this year great. This senior year I want to make the most of it,” Myers said. “While I have a lot of work to do and things to accomplish, I still want to have a good time and enjoy myself because I’ve got to go out with a bang, right?”