Out with the old, in with the new: University Police move facilities 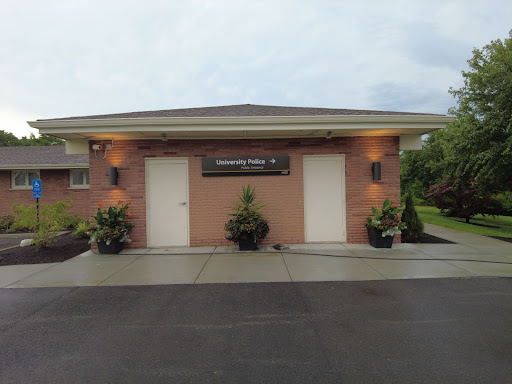 After multiple years of planning, designing and construction, Northern Kentucky University Police have relocated to a newly renovated facility as of May—the former Honors College house located on Nunn Drive.

The former building’s limited, dated space and technology had long been a burden for the department, negatively influencing the department staff’s attitude as well as their ability to serve the community and attract long-term employees, according to Chief Gaffin.

“There wasn’t an aspect of our operation and it wasn’t affecting,” Chief Gaffin said of the previous facility.

The sentiment that the former police station was subpar for the efficacy of the department had been brewing since as early as 2007 when Chief Gaffin was initially hired as an officer, he said.

Around 2018, after years of advocacy for NKU to finance the project and deliberation over where to relocate to, the project team selected the vacant Honors College house to be the site of the project.

Despite having settled on an apt location, the project faced further delays due to a lack of funding, according to Jane Goode from the Department of Planning, Design and Construction, who was the project manager for this project.

Modifications to the structure would commence in early 2021, a process that was disrupted by supply chain constraints delaying the delivery of an essential power generator, according to Goode.

Although the project was inhibited by a myriad of issues, effective collaboration and persistence by multiple university departments led to the project’s completion for the department to move in officially on May 23, 2022.

The renovated police facility capitalizes on modern technology and design that optimize the department’s ability to protect the campus community.

One of Chief Gaffin’s main objectives for the remodeled facility was to leverage space and equipment to create a professional and functional environment with amenities that accommodate the staff through all aspects of their work.

“Creating a professional environment meant that his people would feel that they were being dealt with as professionals and it was good for morale,” Goode said.

This meant apportioning the space to features that meet the needs of a modern police station, such as a role call room, training room, dispatch room, armory and evidence room, but also including luxuries such as a kitchen and lounge area to support staff during shifts that can span from eight to 12 hours.

A major component of the project was the installation of the updated dispatch room and a computer network that reliably supports the department’s communications and emergency response, according to Director of Information and Technology Bert Brown.

The improved space has also opened opportunities for the University Police to connect with the community, hosting various NKU officials for visits and holding an open house with Student Affairs, with other outreach initiatives to be announced down the line, according to Gaffin.

“Everything we do tends to be relationship focused, you know, around building a relationship with the community and the individuals who make up the community,” Gaffin said. “That just gives us another way to do that.”