Orientation Leaders Impact the Past, Present and Future 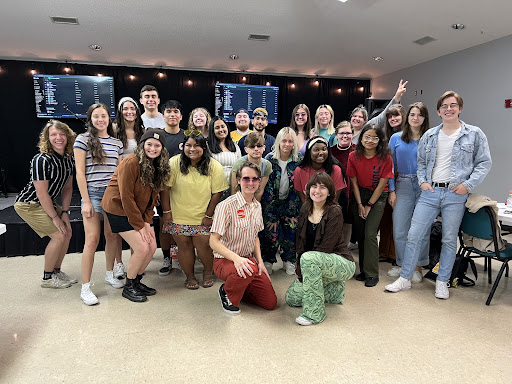 Freshman orientation can be a time full of nerves, curiosity and many pondering questions from incoming students. Fortunately, new Norse do not have to face this day without guidance; orientation leaders are the welcoming front door to all NKU has to offer.

Senior organizational leadership major Angie Natividad reflected fondly on her own incoming freshman orientation when applying to become a 2022 OL (orientation leader). Watching her orientation leaders truly be themselves and make an impact on her was something she hoped to replicate.

“I want to make the freshmen feel comfortable

and let them express themselves how they feel they need to. I like that quality of just being myself around the freshmen and hoping they’re themselves too,” Natividad said.

Beginning on June 2 and continuing through August, orientation leaders will be tasked with meeting incoming students and sharing all they need to know about life as a Norse. Preparation for these dates, however, began far in advance for those given the role of orientation leaders.

Senior marketing and business information systems major Jude Ampfer sought out the role of head orientation leader after serving as an OL in 2021. Upon being selected as one of two head OLs, Ampfer took on an abundance of responsibility and behind-the-scenes planning for this summer.

“I was an orientation leader last summer, and I just absolutely loved it. I felt like I could create the same, if not a better, experience for the orientation leaders [this] year, and that’s what drew me to apply,” Ampfer said.

The two-week long training period, which began on May 16, was a special time for OLs to develop relationships with one another while expanding their knowledge of NKU.

Natalie Dellinger, sophomore social studies secondary education major, pointed out the uniqueness of being both a freshman mentee and a fellow student.

“Being an orientation leader, you definitely have a special position. We train for two weeks to know all the information about campus, but at the same time we’re students; we’re these kids’ peers,” Dellinger said.

There is much to be gained from serving as an OL, Ampfer noted. He accredits the confidence and skills it takes to be head OL to his prior OL experience last year. Ampfer believes orientation leaders promote necessary skills for life after graduation.

As orientation begins and these prepared skills will be put into action, Britta Gibson, Associate Director of Orientation, Family Programs, and Outreach, noted the difference in this summer’s program. The past two years of summer orientation have been marred by the pandemic, which brings a newfound vibrancy and anticipation to this summer’s non-restricted experience.

“We’ve learned a lot in the last couple years. I think we’ve learned to be prepared for any scenario, so it does feel like we’ve got the ground beneath our feet a little bit more than we’ve had in the past two years,” Gibson said.

The future is never too far away for Ampfer and Gibson, who both hope to see even more applications and involvement in the coming years. While OLs do receive free on-campus summer housing and a stipend, Gibson believes paying it forward and increasing your skill set are two of the biggest reasons to become an OL.

“There is something to be said about the tangible benefits, but the ability to grow and to give would be the biggest highlights of the experience in my mind,” Gibson said.