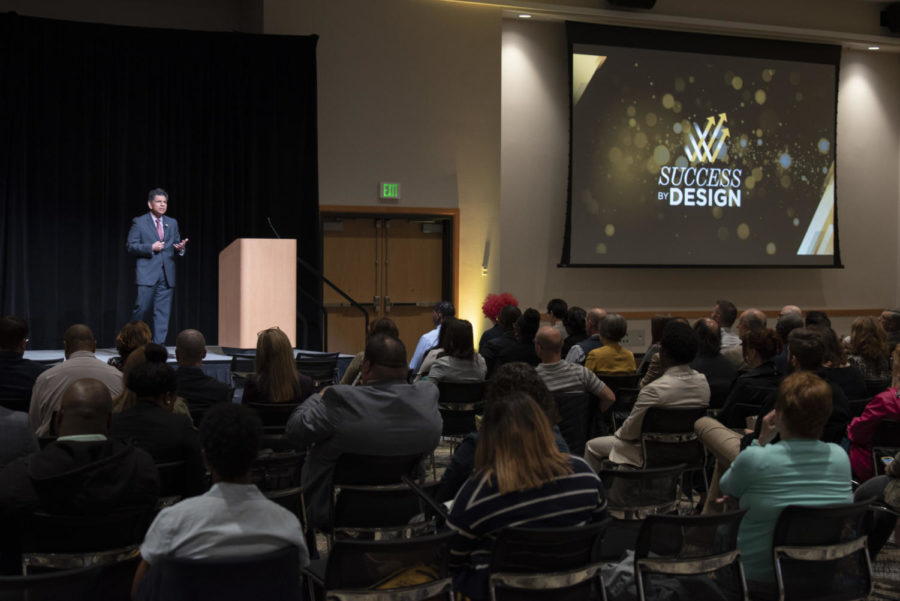 President Ashish Vaidya spoke at the Spring Forum on April 27.

At the Spring Forum held April 27 in the Student Union ballroom, President Ashish Vaidya discussed highlights of the Spring 2022 semester, addressed budget and enrollment, and offered a look toward the upcoming fall semester.

The forum started off with a video recap of the Ukraine Benefit Concert held April 22 in Greaves Concert Hall, which President Vaidya called one of the finest moments of Northern Kentucky University of these last few years. According to Vaidya, the concert raised nearly $20,000 in ticket revenue and sponsorships.

“I’ve had the privilege of seeing some tremendously proud moments in NKU these last few years, inclusive of the two years of the pandemic,” Vaidya said. “But this particular event, I think, was even more meaningful in so many ways … It was so many people behind the scenes that did an incredible job of picking up this idea and delivering what I would consider a flawless, amazing and meaningful event.”

Next, Vaidya welcomed Daniel Myers and Jaelynn Gentry as the new president and vice president of Student Government Association, and Benjamin Figueroa as Interim Vice President for Administration and Finance. He announced that NKU is in the midst of conducting cabinet searches for several vice president positions, including for Athletics Director and for Leader Affairs and General Counsel.

On Success by Design updates, the president focused on tripwire plans that are being or going to be implemented in the fall. One of these plans is modifying the student’s installment plan from three payments to four equal payments, which will cost $90 to utilize and remove overdraft for non-payment in the middle of the semester. Another plan addresses inactive registration holds.

According to Vaidya, several department chairs are developing an online degree mapping tool, which will show students how to best navigate their curriculum and classes. Another update concerned the First-Year Student Success Hub, which officially opens April 28 with a ribbon-cutting ceremony in the University Center.

The president then discussed Moon Shot for Equity, which had its first annual convening in January. Three projects have been announced for priority: examining registration holds, examining emergency retention grants, and examining the transfer pipeline from a community college to a four-year institution to upper division learning.

Vaidya highlighted the groundbreaking of National Panhellenic Council plots on March 25, which he called a symbolic gesture of inclusion, belonging and appreciation for Black sororities and fraternities. Another highlight was the Inclusive Teaching Academy on April 7 and 8, which focused on how faculty and staff can create a more equitable and inclusive learning environment. A Hybrid U task force is continuing work from last fall to examine how the institution can become more intentionally hybrid and expand the range of students that it can serve.

In terms of ranking and assessment, NKU received 28 out of 36 points on the Council for Postsecondary Education’s Diversity Report, where a minimum of 24 points is needed to be eligible for new degree programs. In the CPE Performance Funding Model, NKU has eight metrics above the sector average, the highest in the state after the University of Kentucky. A Georgetown University study on return on investment found that 73% of NKU graduates earn more after 10 years compared to those with only a high school diploma.

In terms of budget, President Vaidya announced funding for several initiatives, including an additional $80 million per year in performance funding, $23.4 million for maintenance, $10 million for Bucks for Brains, as well as funding for the expansion of the Science Center, Young Scholars Academy, Governor’s School for Entrepreneurs and Covington BioScience Lab.

NKU expenditures are projected to be greater than budgeted and revenues are projected to be less, the latter partially offset with Higher Education Emergency Relief Funding. The university will continue support for such initiatives as Coursera, the First-Year Student Success Hub, A Hybrid U, Success by Design, ENTERprise NKU and Moon Shot for Equity.

According to Vaidya, Enrollment in Accelerated Online Learning is plateauing due to competition and limited capacity, and a strong economic rebound may be driving part-time students back to the workforce. The university is expected to see a drop in tuition revenue going into next year.

Vaidya offered registration holds reform, reallocated staffing to the International Students and Scholar Services, waived confirmation fees for new students and an expanded Young Scholars Academy as ways to tackle these challenges. Afterward, the president looked at a 5 by 5 Compensation Plan to provide employees with full career development and a holistic experience.

At the end of the forum, Student Regent Aliya Cannon thanked President Vaidya for all the work that he has done. Director of University Housing Scott Patton thanked human resources, a department that he said often goes unrecognized and unappreciated, for the hard work they put in this year.