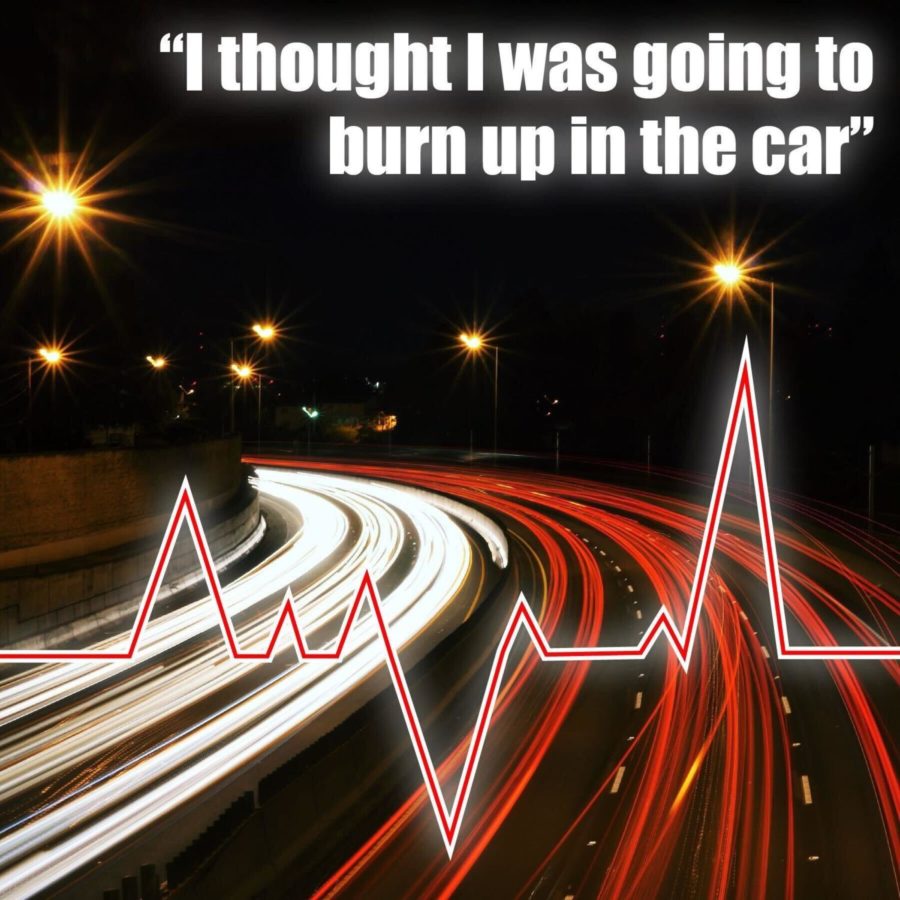 A warm summer day. A day spent with loved ones. A swim in a lake. A drive home. A change of pace. A telephone pole. A crash.

After the car crashed into the telephone pole, Tina Gaskins, a recently retired custodian from Northern Kentucky University, could not move. Her body had been shot through the windshield and thrown back into her seat. With her forehead and her knees pinned to the dashboard and the passenger door crushed, Gaskins sat with her head facing down, staring at her feet and watching the blood pool around them.

While her body was forced to remain idle, her mind raced with a thousand questions and possible outcomes of the situation she found herself in. As the other passengers made their escape from the car, Gaskins said she just kept hoping that they would not leave her behind.

“I thought I was going to burn up in the car,” she said. She admits how petrifying it was to sit, unable to help herself and unable to be helped. “[The car] was popping and crackling and it was so scary,” she added.

In the midst of the madness surrounding her and despite the negative thoughts filling her mind, a moment of peace met her where she was and everything went quiet.

An outstretched hand from an angel. A moment’s rest. A conversation with God.

“Where are we going?” Gaskins asked.

“You know where we’re going,” replied the angel, who Gaskins said looked just like her. The woman led her from the accident and brought her closer and closer to a bright light in the distance.

“I [wanted] to be in that light. It was so comforting that you wanted to be with that light. I can’t explain it,” Gaskins said, “And then I could make out a golden throne. And then I could see the tips of [God’s] fingers.” She knew then that she was dead, but she wasn’t ready to be dead.

Gaskins turned to the angel and recounted a recent happening in her life. She pleaded with the angel to let her stay. She told the angel that her new husband had a four-year-old who had recently asked Gaskins to be his “mommy” and made her promise she wouldn’t leave.

“I never thought of anything except that promise I made to that child,” she said. As soon as she told the angel, Gaskins said she immediately was back in her body. Gaskins wanted to stay because she knew she had a child that needed her.

After the accident, Gaskins completely changed her attitude toward religion. Although Gaskins had been baptized into the Christian faith at a young age, she said that she never truly lived for the Lord. It was not until her experience that she truly dedicated herself to her religion and became fully enthralled by it.

Although the encounter happened 41 years ago, Gaskins is as dedicated to the Christian faith today as she was on the day she says she saw God. Gaskins enjoys sharing her story with others.

Gaskins has worked at NKU for the past 20 years and retired from her position at the beginning of March. Her last day on campus was March 1.

Gaskins’ story raises interesting questions about what comes after life. The answers to these questions are explored in a class offered by NKU.

REL/PHI 371, titled Death and the After Life is a course that teaches students about various conceptions for afterlife including reincarnation, resurrection and disembodied existence, among other things. According to the syllabus, the objective of the course is to help students improve in knowledge, skill and self-understanding.

Topics of discussion in the course include personal identity, near death experiences and the nature of consciousness. Gaskins has actually committed to attending one of the classes when it is being taught next semester in order to share her experience with students.

Terry Pence, the Death and the After Life professor, said, “Basically, we’re looking at people’s [near-death] stories and stuff like that and trying to focus in on their claims and whether or not there can be some verification.”

The class also delves into the scientific side of things as many scientists argue that these near-death experiences are the result of chemicals released in the brain. “In science and in our case, we try to use the best explanation that we can,” Pence said.

The class examines evidence for and against the cases. Pence says they continually try to answer the question, “What best explains it?”

Pence also talked about how the question of what comes after death is ancient. He talked about how when Socrates was sentenced to death, he said he would have been more willing to accept his punishment if he knew that what came after life was good.

Dominic Ruschman, a senior psychology major, was enrolled in the course during the 2021 fall semester. “I think the course increased my acquaintance with many of the diverse religions of the world, past and present,” he said.

Ruschman talked about how the class discussed some of the world’s religions and beliefs surrounding life after death and how not all of them believe there is a life after death. This course fulfills one of the core requirements for the philosophy major but is also open to other students. If you are interested in taking the course, reach out to your advisor to enroll. To learn more about the course, contact Terry Pence.