The event featured a resource fair, a keynote address and a march around campus 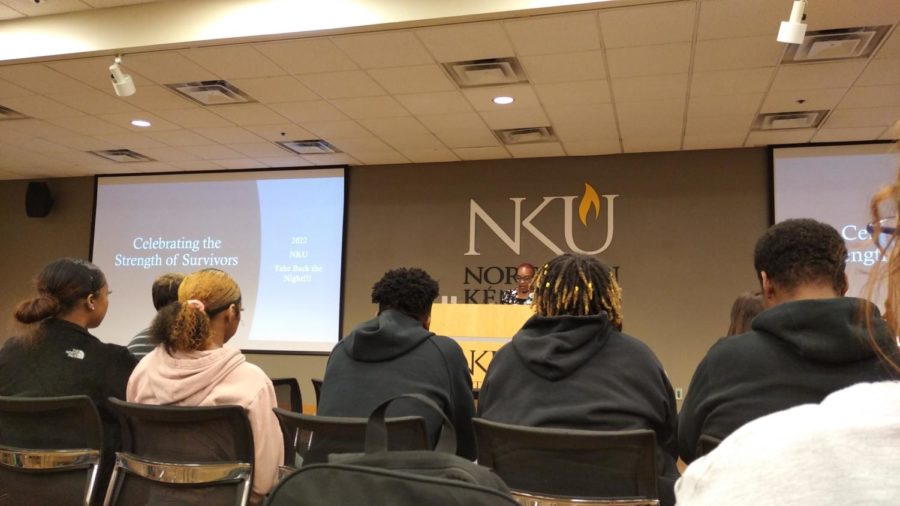 Gallery|3 Photos
Mildred Nguyen
Kalimah Johnson from SASHA Center in Detroit, Michigan was the keynote speaker for 2022 Take Back the Night.

Kalimah Johnson’s voice resounded through the University Center 375 ballroom as she recited from Lucille Clifton’s 1993 poem “won’t you celebrate with me,” proudly and powerfully, to a rapt audience of students and community members. The poem was a source of inspiration to her, a survivor of sexual violence, and she told of her trauma and advocacy work for survivors with both ferocity and tenderness.

The founder and executive director of Sexual Assault Services for Holistic Healing and Awareness (SASHA) Center in Detroit, Michigan, Johnson was the keynote speaker for 2022 Take Back the Night: Celebrating the Strength of Survivors, taking place April 5 and in person for the first time since 2019.

Hosted by the Norse Violence Prevention (NVP) and LGBTQA+ Student Initiatives, Take Back the Night offers a space for survivors of sexual and interpersonal violence to connect with allies and resources, and to let their stories be heard. This year’s theme was celebrating the strength and resiliency of survivors.

“Usually Take Back the Night is more of a solemn event … Talking about this is hard and that tends to be the vibe,” said Samantha Murrell, NVP project coordinator who was highly involved in this year’s planning. “But Kalimah came in and said, ‘I want this to be a celebration. I don’t want this to be a sad room together, I want us to celebrate that strength, and have music playing, and just be happy in that space.’”

The event opened with a speech from President Ashish Vaidya, where he discussed the rise in domestic violence, particularly against women and children, over the course of the COVID-19 pandemic.

“We call it the silent pandemic and it’s been even worse these last few years,” Vaidya said. “It’s just so tragic that we are in the state where we still have to confront these issues. Building awareness and education is what’s really going to help us go through this.”

Vaidya commended the survivors for their strength and bravery, and gave a special shout-out to the organizations providing support and resources at the event: NVP, LGBTQIA+ Student Initiatives, University Police, Health, Counseling, and Student Wellness.

“This is what it means to be a community. Despite the seriousness of the tragedy of sexual violence that we have to confront on a day-to-day basis, I’m proud to have these folks here to support us,” Vaidya said.

Johnson followed with her address on trauma, survivorship and healing. She is a survivor of collective trauma that left her with anger, sorrow and distrust of people who provide professional help. Then she decided if she was to help herself, she had to learn to help others.

For Johnson, “won’t you celebrate with me” asked an important question: How do we show up and celebrate sexual assault survivors in spite of rape culture, in spite of the institutions that keep them down? That question led her to establish SASHA Center in her hometown Detroit.

She recalled meeting advocates who were genuine along the way, as well as receiving racist comments and assumptions from organization leaders who were providing services to sexual assault survivors. She recalled the culture of white supremacy everywhere, even within the Detroit Police Department with which she worked as a counselor, where officers refused to take pictures of bruises on dark-skinned people or found doing so futile.

“If we were to create a healing space collectively, we needed to bend a little,” Johnson said. “We needed to create a space for survivors to share, to be believed, to be respected and revered.”

Johnson stressed the importance of stopping victim blaming, which she said is steeped in misogyny, white supremacy, the patriarchy and the need to control power. She emphasized the impacts of creating programs that address the needs of marginalized people.

“When we enter the most marginalized of people, including LGBTQI+ folk and gender non-conforming folk, we stand a better chance of having programs that respond to us all,” Johnson said. “Get out of your own way! You just have to know how to make more space for people.”

Making more space for people means a joyful, peaceful coexistence among different groups. Johnson gave examples of a restaurant dinner she attended where meat eaters accommodated vegans, and when the descendants of the white family that enslaved her ancestors invited her to stay at their place.

Afterward, Johnson listed the steps for how to celebrate survivors: believe them; support them how they see fit and ask them what they need; demand policy change for every loved one; create space and opportunities for survivors to build their own programs; hold them accountable for their own healing and provide the tools to help them heal others; provide clean air, water, housing, and expressions of culture and art; uplift survivors from all communities and from all margins; change the narrative concerning survivors in movies, books and songs; have intergenerational dialog about sexual assault.

“We must ask ourselves a set of questions: Did we increase our connection? Did we encourage healing? Are we able to remove the shame and guilt associated with being raped?” Johnson said, adding that organizations and institutions need to collaborate more with smaller local programs.

Whereas most of her speech was delivered in a rousing tone, toward the end Johnson addressed listeners more gently and quietly, drawing an intimate connection between her and survivors in the audience.

“May we all continue to fight together for our visibility, to uplift our voices. You have the right to break your silence. I acknowledge all of your advocacy that you’re doing and I acknowledge your tenacity. Keep breaking the silence, keep asking for what you need,” Johnson said.

Following the speech, two students shared stories of the sexual abuse and assault they had experienced. Through their testimonies, they reaffirmed their strength as being able to make their own choices and support other survivors.

According to Murrell, this year the organizers asked people to sign up for the Survivor Speak Out ahead of time via an open call on social media.

“They took it upon themselves to come and to share their stories and to share that bravery with us,” Murrell said. “We just asked and they showed up. That was really incredible because it’s not an easy ask.”

As the event drew to a close, participants were invited to march around campus. Holding electric candles – those with teal ribbons for survivors and those without for allies – the procession streamed out of the ballroom, rounded Loch Norse and returned to the University Center entrance, while the rain drizzled upon them and puddles splashed under their feet.

“There’s just something completely different about being in person with people, about hearing the survivors’ stories and seeing the support in that room – I think that was the biggest thing,” Murrell said. “To know that you were surrounded, like literally next to people who supported and cared about this cause.”

Correction: This article previously misquoted Kalimah Johnson, stating that she received racist comments and assumptions from organization leaders who were sexual assault survivors, and that Black female police officers in Detroit Police Department discriminated against victims with darker skin. The organization leaders Johnson mentioned in her speech were providing services to sexual assault survivors, and Johnson deliberately did not mention the gender and race of the police officers. The misquotes have been corrected.