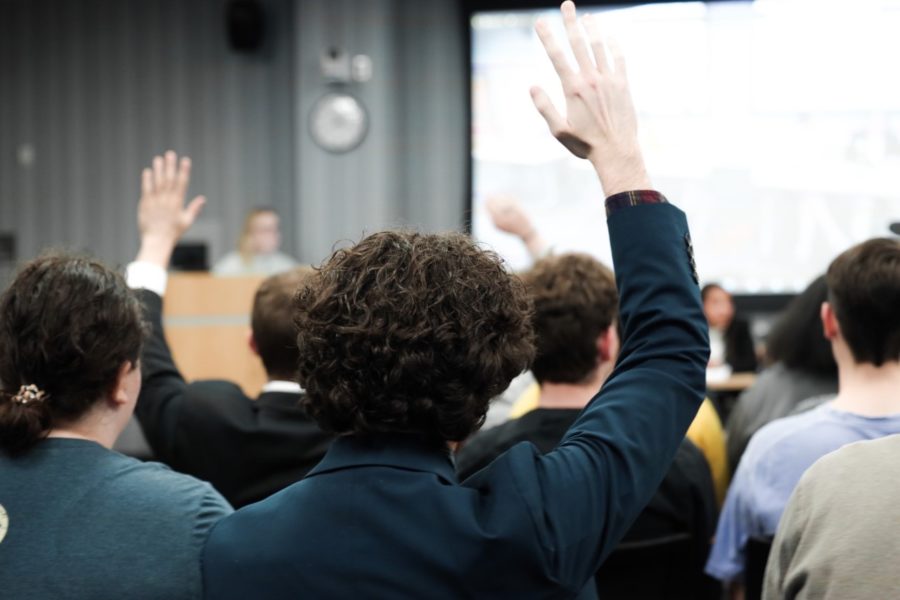 The audience of the debate with questions for the three slates of candidates in the Student Union’s Student Governance Room on Monday evening.

Each of the slates of candidates discussed a campus-wide issue of diversity, where minority groups are often underrepresented as well as taking up a small percentage of the total number of students at NKU.

Cabrera and Romo are both Mexican-American women and have experienced hardships along the way due to their race. Their three main pillars are focused around decreasing inequality, increasing the graduation retention rate and working with students whose first language is not English.

“We don’t see faculty and staff that represent us, that celebrate our culture and speak our language and we want to increase that. We want everyone to feel included, especially within business, arts and sciences,” Cabrera said.

According to Romo, handling the diversity issue across campus has to start with holding faculty and staff accountable.

“I think it starts with faculty and staff. I think that holding them accountable and wanting to learn about the diversity on campus and knowing that it’s very small … Just letting them know, going back to that knowledge and coming in with that open mind, being willing to learn and adapt and know that there are issues within certain diversity groups that need to have action taken to them and understand that change needs to happen,” Romo said.

Myers feels the diversity issue can be handled by bringing students together to embrace differences.

“NKU is like a big melting pot; all the ingredients are here, but no one’s turned it on,” Myers said.

Gentry added that student involvement is just one of the ways she and Myers plan on combating the diversity issue by their knowledge and cultural pieces of their platforms to help raise awareness for events on campus in order to “bridge the gaps between those communities and further bring the people together.”

For Omar, addressing diversity issues on campus starts with SGA actually reflecting the student body. As a Muslim student, he feels that the Muslim community at NKU is not really big and that his religion is not highlighted on campus. One of the slate’s biggest advocacy goals, he said, is for the creation of a non-denominational prayer space.

Omar also mentioned events hosted by his committee last semester, where international students were given the opportunity to share stories of their journey to the US and the challenges they faced in adapting to the culture.

“We just need leaders who genuinely care and are here for the right reason to address the issue of diversity,” Omar said.

According to Renton, another way that their slate would be advancing diversity, equity and inclusion is through appropriate funding, citing that the Norse Commons rock had been vandalized three times and the university’s only response was to install a camera.

“We’re all students here, we all pay money. We have a right to know where our money is going, especially when it comes to diversity, equity and inclusion when it is such an important part of our campus,” Renton said. “We need to start making sure that we’re talking about the issues and looking at where the money goes.”

As members of Northern Kentucky Sunrise, Omar and Renton discussed ways that their administration would make NKU more sustainable.

According to Renton, the first part of their plan is to implement the sustainability resolution that was passed last December. They want to make it clear to NKU that they have higher sustainability goals than the university is currently aiming for.

“We want to achieve a fossil-free campus in the next 20 years, and we are committed to advocating for that,” Renton said. “Whether it means we have to go to the state legislature and advocate for the laws to be changed, we are ready to commit to the hard work and get hard work done.”

In addition, Omar and Renton want to hold NKU accountable to promises in its sustainability master plan by ensuring that renovated buildings are meeting environmental standards.

Omar grew up in a community where sustainability was not an important issue, so he highlighted the many students at NKU who have no knowledge of or interest in sustainability. Working with high-ranking university officials to recruit people who are passionate about sustainability, so that knowledge of the issue can be brought campus-wide, is another part of their plan.

Current SGA President Aliya Cannon asked each of the slates of candidates how they would take care of their mental health when facing challenges, noting that her position has allowed her to take time to prioritize her mental health for her own sake.

Cabrera mentioned ways that helped her release stress, such as talking to her parents.

For Myers, finding ways to care for his mental health came along with time. He mentioned how setting aside time to play basketball as well as signing up for therapy sessions was something that helped him step away from stress.

“I love playing basketball, just setting a time aside to play basketball to have that release and positive outlook. With that, I am actually signed up for therapy just to talk through some things,” Myers said.

“I really had to learn more about mental health and what it means to take care of myself. Going on that journey, I have learned my limits,” Omar said.

An audience member asked Omar and Renton how they would fix the federally mandated Title IX policy, which the slate sees as providing inadequate support to survivors.

There are dismissal requirements within Title IX, including:

This means that due to a federal regulation implemented in 2020, the university will dismiss a case of sexual harassment if the conduct did not happen during an educational program or event hosted by NKU or the respondent does not attend NKU.

“During this pandemic, I’ve talked with survivors. Some of these people are very close friends to me … This is something that is personal to me, knowing that people are not getting the justice that they are due,” Renton said. He and Omar are doing everything they can to make sure they are communicating with Title IX to learn about and address students’ concerns, he added.

The asker mentioned that with the COVID-19 pandemic, there has been an increase in the likelihood of sexual violence for first- and second-year students on- and off-campus during what is referred to as the Red Zone: the time period from freshman orientation up until Thanksgiving break.

In response to this issue, Gentry said that though she had attended several sessions with Norse Violence Prevention and Title IX, she would like to see a space that allows for more conversations for students to learn about Title IX processes.

Cabrera suggested including undocumented immigrants who are survivors of sexual violence and people who are victims of hate crimes into the university’s prevention training.

In order to increase the reporting rate, Cabrera recommended holding training seminars, not just in English but also in Spanish and other languages.

Renton wants to raise awareness of organizations like Norse Violence Prevention and other resources on campus, to ensure that prevention and support for survivors goes beyond a training session.

“We’re just drilling in the fact that assault is real on every college campus. I can almost assure you that everyone of us either survived it or knows someone who has,” Renton said, adding that his slate will be using their platform as Student Government to raise awareness and act on students’ concerns.

SGA presidential elections will take place on March 30 and 31.