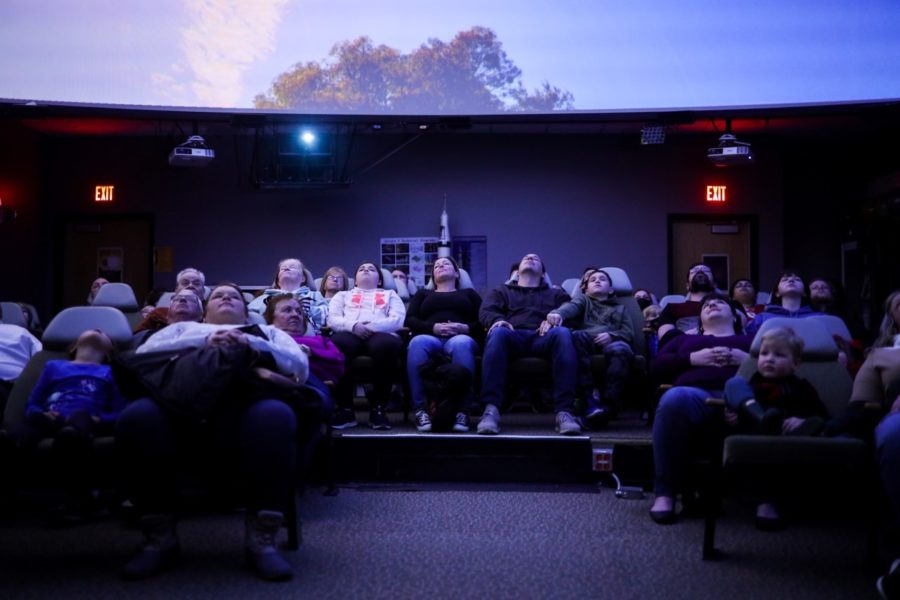 Inside the Haile Digital Planetarium, an unassuming room tucked into a corner of the Science Center’s fourth floor, a dome-shaped screen hangs from the ceiling like a massive eye. Three projectors grip at its edge, combining red, green and blue light into colors on the screen. When the lights dim, plunging the room into darkness, the eye becomes a virtual portal to the stars. But that sky had been dark since Nov. 2019 – until now.

Following two years of repair and upgrade, the Planetarium reopened to the public on March 17 and 19. It ceased operation after the power supply in one of the projectors broke down and no replacements could be found, according to Planetarium Director Christa Speights. The current system is more streamlined, using only three computers to operate the projectors instead of 10 like before.

With the new system in place, the Planetarium is once again capable of projecting a full sky map of the constellations and immersive videos about the planets, stars, galaxies and the cosmos, as well as subjects outside of astronomy. The Stellar Lunch Break showings on March 17 played 20 minutes of classical music from various composers, accompanied by visuals not just of the universe but also of paintings, the landscapes on Earth and the canals of Venice.

The upgrade also comes with new functions. In a Public Grand Reopening Day showing on March 19, Speights showed the audience how to play “Dome Invasion,” a video game that utilizes 360 degrees of the dome screen. The effects are not only limited to new programming but extend to the visual aspect as well.

“Before [the old projector] broke, I loved being able to come in here and mess around with this stuff,” said Alfie Scott, a senior sociology major who works at the Planetarium. “But the difference is incredible. The colors are much brighter and smoother.”

Scott started out as a volunteer for the Planetarium and later asked Speights to be an employee. Having been with the Planetarium since freshman year, she primarily talks about the mythology behind the constellations.

Scott’s greatest challenge is remembering everything since she has not been to the Planetarium in two years, but she is excited to go back to work.

The public’s reception has also been good according to Speights. 49 people signed up for the Stellar Lunch Break and 260 for the Grand Reopening, including students and families with children.

“It was really cool. It was really informative,” said Brady Wurtz, one of the attendees at the Grand Reopening. His family’s favorite part was the visuals for the black holes from the new “Unveiling the Invisible Universe” video. They would be coming back for future showings, they added.

Beginning March 25, the Planetarium will have educational programming for preschool and elementary children at 6 p.m. and general audience programming at 7:30 p.m. every Friday. The latter will include interactive constellations and a half-hour video.

The staff is in the process of finding a portable planetarium that might enable them to produce shows on the road, Speights said. She is also looking at buying a system for laser light shows, which would be for entertainment only.

“All of our educational shows are free and we are committed to keeping them free. Our entertainment shows, I don’t mind charging for,” Speights said. “I can have a source of revenue and hire more students. We can go to another level.”

Scott is looking forward to more people attending Planetarium shows. “Most people don’t know that the Planetarium exists, but with the reopening, I hope that the attention lures more people to see the shows because they are great shows,” she said.

For more information about the Haile Digital Planetarium and its programs, visit planetarium.nku.edu.