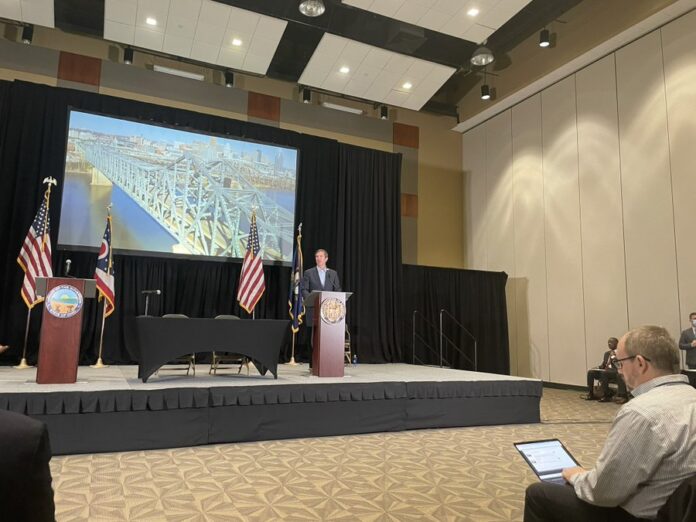 Kentucky Gov. Andy Beshear and Ohio Gov. Mike DeWine met Monday for a joint press conference in Covington to announce a “Memorandum of Understanding” that would see the possibility of a companion Brent Spence Bridge taking another step forward.

Held at the Northern Kentucky Convention Center, the memorandum announcement will see both governors jointly seek around $2 billion in funding for the project. The funding would come from the 2021 Infrastructure Bill.

“We believe this is one significant step forward to building a new bridge and improve the current bridge,” DeWine said. “I don’t have to tell anybody in this room the importance of the bridge.”

DeWine highlighted the national significance of the bridge, which spans from Michigan to Florida along the I-75 corridor.

“The steps we are taking today and the documents we will be signing we believe position us to get the money we need and start construction on this bridge,” DeWine said.

But, the Ohio Director of Transportation Jack Marchbanks and Gov. Andy Beshear had differing opinions on when the project would be started. Marchbanks mentioned that ideally, renderings would be ready by the Fall of 2023. Beshear, who runs for reelection next year, wants to break ground in 2023.

“If we do get grant funding by the end of this year, our goal is to have a design procurement package by fall of 2023,” Marchbanks said. “We’re looking at five years. That’s a conservative estimate.”

“Can I just add? I want us to break ground next year. It’s time. I know it’s aggressive,” Beshear said.

In his budget address in January, Beshear offered up roughly $250 million from the General Fund to go towards the project. DeWine was unclear on how much Ohio would put forward toward the project.

One of the main challenges of the bridge project will be traffic diversion while it’s being built. When a tractor-trailer crashed and caught fire in the fall of 2020, the bridge was closed down for several months, causing significant traffic disruptions in the area. The bridge then went through a year-long painting project just months later.

“Anybody who lived through the bridge repainting project, which we got lots of complaints about that, will recognize that five years’ worth of that is going to be very challenging,” said Covington Mayor Joe Meyer. “We have to make sure that while we’re going through the process that a number of these issues are addressed and managed carefully.”

In 2015, former Governors Steve Beshear and John Kasich announced that they would split the project 50/50. Back then, the project would have also included tolls, some current Gov. Beshear has been adamant that wouldn’t happen this time around.

Many politicians have promised that a bridge would come to fruition, including former President Barack Obama and a handful of local legislators. But, what makes this time different?

“The federal infrastructure package really made it possible,” said Northern Kentucky Chamber of Commerce President Brent Cooper. “We are not just probable to get funds through these grants. We’re likely.”

“That was far more aspirational and hoping they could pass a funding source that both of them knew we couldn’t pass, which was tolling,” McDaniel said the former governors’ proposal. “There is money there, and there’s a federal funding package. All the pieces are there at this point and time financially … this is no longer aspirational. This is very realistic.”

But, so far in the Kentucky legislature, there hasn’t been a mention of any funding for the project in their biennial budget. Beshear mentioned the funding in his budget, but the House hasn’t released specific numbers so far. When asked about the funding coming from the Senate budget that’s expected to be released soon, McDaniel wouldn’t give specific details.

“That’s the question of the century,” McDaniel said. “Everybody still has hope. We’ll see how it goes.”

The story was first published on LINK nky. The original story can be found here.