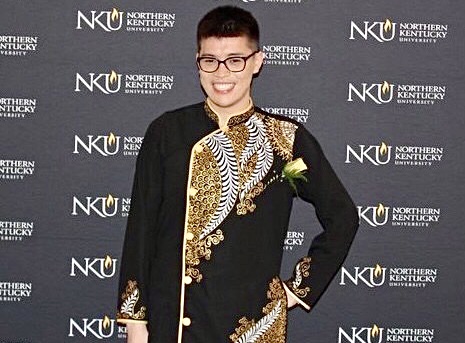 This year had actually been the second time Nguyen was nominated for homecoming court, when just one of the many organizations he is involved with, Presidential Ambassadors, nominated him. He has been involved with this organization since his freshman year and serves on their e-board currently.

“I do put all of my effort into it [Presidential Ambassadors]. So I thought it would be cool to get nominated, but everyone in it is amazing. We all cheer for each other. I thought it was going to be our president instead, but then it was me. I was like, ‘Wow, everyone has faith in me, everyone thinks I really represent PA well enough for you all to vote for me.’ I was really surprised but happy,” Nguyen said.

Nguyen is currently a student ambassador for LGBTQI+, has served in SGA since his freshman year, is a leadership mentor, a peer coach for the First Year Student Success Hub, gets to chair the Breaking Ground Retreat this year and was an orientation leader during summer 2021.

Attending small, Catholic schools growing up, Nguyen said he didn’t really get many chances to join organizations and get involved.

He completely altered his narrative in which he strives to be involved throughout campus and has received awards such as, “Rising Star”, “Most Growth”, “Most Spirit” and “Freshman of the Year”.

One of Nguyen’s favorite memories of being nominated for homecoming was getting to choose what outfit he wore. Being a big lover of fashion, Nguyen knew his traditional Vietnamese ao dai (a long, split tunic worn with trousers) that he wore to his sister’s wedding last August would be perfect to embrace his heritage and be himself.

“I felt like I walked into that room and all the other male candidates were in suits and ties and I was like, ‘My outfit really represents me because I know they would never wear heels,’ and it shows how I’m not really afraid to show my feminine side and that I’m gay and part of that community,” Nguyen said.

An item he got to check off of his bucket list during his homecoming experience was blowing the NKU gjallarhorn, something he has wanted to do for quite some time.

10 years ago, though, Nguyen wouldn’t have pictured himself where he is right now, being involved with so many organizations and winning homecoming.

“I thought I’d go to college, and maybe try to make some friends, just really focus on school and try not to be so involved,” Nguyen said. “If you would’ve asked me a year ago if I thought I would win homecoming, I would’ve said no, because I know I work so hard and get so involved but it’s not for the titles, it’s just because I enjoy it, it’s fun and I love the people I’m meeting.”

Hannah Miller, junior social work major, first met Nguyen their freshmen year as they were getting sworn in as senators in SGA. Their last names are close alphabetically so they sat next to each other.

“And from the very first moment I met him, he’s very talkative, makes everyone feel welcome, and I just remember from the beginning him being very welcoming and positive,” Miller said.

Miller, who is also involved with Presidential Ambassadors, said one of the jobs they do within the organization is help with commencement each semester, where they carry flags and banners at the beginning of each ceremony. Sounds like a nerve racking job, right? Being surrounded by so many people awaiting graduation?

“It’s not a very popular job because it makes people nervous. Every single semester, he’s the first one to raise his hand and be like, ‘I will carry the flag, I’ve got this,’ and he does a really good job every time,” Miller said.

Senior mathematics and statistics major Abigail Leonhard was also nominated as homecoming royalty alongside Nguyen, where the two were both nominated by Presidential Ambassadors.

“I knew him right when he was a freshman and joined PA, and I remember him distinctively doing so much for the organization. He may not be the loudest person in a room, but he gives so much to all of his organizations that I think speaks so loudly,” Leonhard said.

Miller and Leonhard both shared similar experiences with Nguyen, stating how actively involved he has been and remains to be as well as an overall fun person to be around.

“Every memory with Hanson is a good memory, that man is like a burst of energy and light wherever he goes,” Miller said.