Democracy & The Arts: A lecture delivered in speech and dance 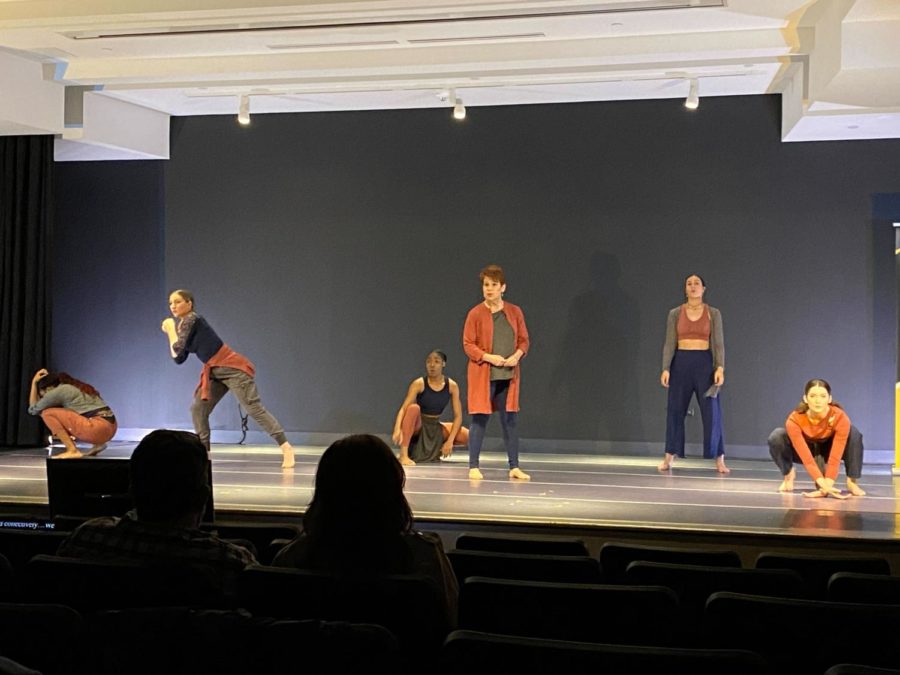 Tracey Bonner, associate professor of Dance and BFA dance coordinator at Northern Kentucky University, said that dance and democracy are related as they both require participation to be effective. Moreover, she believes dance has the power to help individuals and groups interpret and cope with their feelings inside a democracy.

To aid her argument, on Tuesday, Feb. 22, Bonner and five NKU dancers, Maiya Caldwell, Arianna Catalano, Madisyn McLaughlin, Lavette Patterson and Kasey Weinfurtner, took the stage in Cincinnati’s Union Terminal to host “Democracy & The Arts: How To Be a Person Who Stands.”

Nearly 50 people gathered in Reakirt Auditorium and on a Zoom call to attend the non-traditional lecture. During the event, Bonner talked about the importance of the arts in raising awareness about civil rights, among other issues found in American democracy, while her five students interpreted her words through a choreographed dance.

Bonner said that she and her students came up with the idea for the event after several discussions about how the arts reflect the civil rights movement, the impact of protest music and how protest music affects people. From there, she said, “We settled on the idea that the combination of arts and the ideas of democracy cause us to want to act and trust that we might be able to make a difference in the lives of others.”

Bonner believes that the program is timely. “We are in a special place in our world currently,” Bonner said.

During the lecture, Bonner discussed major events in American history: infamous assassinations, the attacks on the World Trade Center and the police assault on George Floyd. She noted that these moments in time are evidence that change can be made if we choose to stand up for others.

Bonner added that art gives people an opportunity for expression. “Art is what provides us a way to interpret how we feel about these kinds of events,” she said.

Bonner hopes that audience members walk away knowing that they have the ability to make a difference and added that maybe they will want to take a dance class too.

The conclusion of the performance was followed by a question-and-answer session, during which dancer Maiya Caldwell, a BFA dance candidate, talked about the importance of improvising during performances of this nature.

“The cool thing about work like this, and art in general, is that you really kind of have to go off of vibes,” Caldwell said.

Caldwell believes that most communication is non-verbal. She said that when it comes to a performance like this, you have to think about how to take that non-verbal communication to the next level in order to share a story and a message with the audience.

“It’s about taking an idea and turning it into something bigger,” Caldwell said. “That’s why it’s easier to improv stuff like this: because we already have the vibes.”

The event was held in partnership with The Nancy and David Wolf Holocaust and Humanity Center. Jodi Elowitz, the director of education and engagement at the center, said that the event aligns with the center’s goal to create a community of upstanders and the mission of the center: “To ensure the lessons of the Holocaust inspire action today.”

“We encourage educators, students and visitors to find their ‘moment.’ To address topics that are important to them in ways that allow them to be the best of humanity. We understand the fragility of democracy and that we need to protect it,” Elowitz said.

The center hopes that the people will leave the program inspired to contribute to their communities and the world. Particularly, they hope that the words of local Holocaust survivor, Edith Carter, resonates with the audience: “Everybody, every human being has the obligation to contribute somehow to this world.” These are the last words visitors see when exiting their museum.

“Democracy & The Arts: How To Be a Person Who Stands” also gave NKU students a chance to get in-field experience. The web broadcast was provided by NKU’s NorseMedia crew Latonya Vires and Zach Schutte and production assistant Hatem Dahleh. At the event, these students had the opportunity to work with official equipment.

Students were able to learn how to play various roles in media production in a live setting. The students worked under the guidance and instruction of professor of Electronic Media and Broadcasting, Chris Strobel.

The Nancy and David Wolf Holocaust and Humanity Center’s programming focuses on history and how people can learn from it to create a better present and future. For more information about the center as well as information about their upcoming events and how to attend, visit https://www.holocaustandhumanity.org.

The event was another installment of NKU’s Six@Six lecture series presented by NKU’s Scripps Howard Center for Civic Engagement. If you missed the lecture, go to NKU Scripps Howard Center for Civic Engagement YouTube Channel or scroll through the archived lectures found on the Six@Six website to watch a recording of the program.

Visit sixatsix.nku.edu for information about upcoming programs in this lecture series.