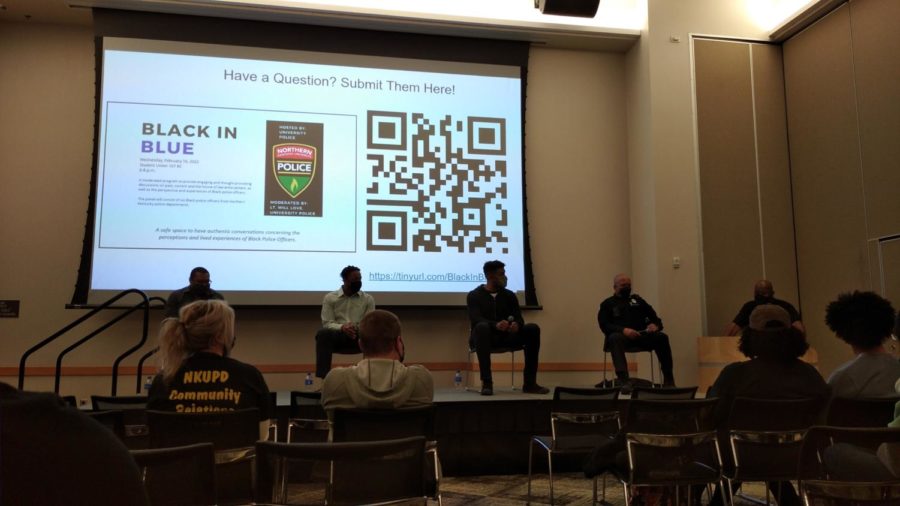 Patrol Officer Antonio McKinney of Florence Police Department recalled pulling over an intoxicated white woman to issue her a DUI test. Seeing that he was Black, she asked him what his highest level of education was: Bachelor’s degree, an answer that left her in disbelief. It was impossible, she said, and she refused to undergo his DUI test until a white officer arrived on the scene, whose test she agreed to instead. In another instance, he was called a sellout by a Black person he arrested for working in the police force.

McKinney’s accounts highlight the unique experiences of Black police officers in Northern Kentucky: they are the minority in their department, they serve predominantly white communities, their career choice is not always approved by their family and friends. Furthermore, they had to contend with their decisions in the wake of the Black Lives Matter protests against police brutality and systemic racism that took the nation by storm in 2020.

These were the focus of Black in Blue, a discussion on the perspectives and experiences of Black police officers and the past, present and future of law enforcement. The discussion took place on Feb. 16 in Student Union ballroom 107, moderated by Lieutenant Will Love of Northern Kentucky University Police Department and supported by Vice President for Student Affairs Eddie Howard as part of Black History Month celebrations.

The five speakers, including McKinney and Love, came from various Northern Kentucky law enforcement agencies. For two hours Love asked the questions and the other officers provided the answers, though Love contributed to the conversation as well. The discussion went on for two hours to the reception of an enthusiastic audience, among whom were NKU students, faculty, staff, police officers and those from outside the university.

The questions spanned a wide range of topics, from the challenges the officers faced in their line of work and their mental health, to implicit racial bias in policing and the militarization of police gear. Likewise, the atmosphere often shifted between seriousness and levity: the speakers shared personal anecdotes, made jokes and poked fun at each other, but never straying far from respect.

The experience of being a police officer has been positive for them on the whole. They do not believe that they are facing any particular challenges in the field, though they agree that 2020 was a rough year.

“The biggest challenge I personally face now is how to not offend people who look like me,” McKinney said, adding that police work is just a way to provide for his family. “I don’t do it for power. I don’t do it to make myself feel like I’m better than others.”

For Sergeant/Detective Bryan Irby of NKU Police, the killing of George Floyd made him question if police work was fit for him.

“I didn’t want to be looked at as part of this system. I came to the conclusion that, if not me then who? We have to be representatives, we have to show our other side, we have to let others see what it means,” Irby said.

The speakers’ agencies, from campus to city and county levels, are all currently employing fewer than five Black police officers out of a workforce that ranges between 21 and 75. Patrol Officer Alex Turner has been Campbell County Police Department’s first and only Black officer in a hundred years.

Some of the speakers’ family members and friends were not happy with their decision to join the police, either out of disapproval or concern about the danger; others were more supportive. The officers would all love to have more minority members within their departments, nonetheless.

“When we are given the opportunity, we must demonstrate that we are as articulate, as sound as anyone else,” Turner said when asked about the low percentage of Black officers in Northern Kentucky. “In this region, some things are simply what they are, but that does not stop me or any of these officers from doing the best that we can.”

The speakers suggested having more representative officers as a way to end Black citizens’ fear of the police, for it would be easier to interact with police officers who look like them.

“I think it’s good that we talk about race for integration and familiarity among the races so that the perceptions, biases, stereotypes can be challenged,” said Patrol Officer Kalin Holland of Fort Thomas Police Department. “I think that’s only possible through close connection and contact. It doesn’t happen through people staying in their own channels and their own lanes.”

But in order to recruit from minority groups and connect more to the communities they serve, law enforcement agencies must first overcome the racial bias that implicitly influences human behavior. The speakers recommended a thorough approach to sensitivity and inclusivity training, not merely doing so to check off a box.

“We got to do things top to bottom, left to right,” Holland said. “There’s been some effort to weed out people with questionable ideology. If it has to do with the culture, then the culture has to change. The environment has to change.”

Regarding the role that implicit racial bias plays in policing, the speakers said that it is difficult to prove if an officer is being racially biased within the bounds of lawful conduct.

“To a degree, law enforcement is a reflection of the society that it serves. I’d be hard pressed to say that I have seen an officer using emotions in the place of the law,” Turner said. “One reason is the advent of the body-worn camera. Everything you do is going to be captured on that camera. You can say what you want, you can write what you want, but the camera don’t lie.”

Toward the end of the discussion, the officers wished to leave a legacy of honesty, integrity and hard work with their career.

“At the end of the day, we’re all here for the same reason: to be here for the community and for each other. We support each other and understand what our goal is, what our mission is,” Irby said.

Lieutenant Love hoped that the officers could get together more in the future, perhaps in the vein of a similar event, and come up with ideas for recruitment or how to treat each other better.