Board of Regents: Research presentations, budget and recognizing retiring staff 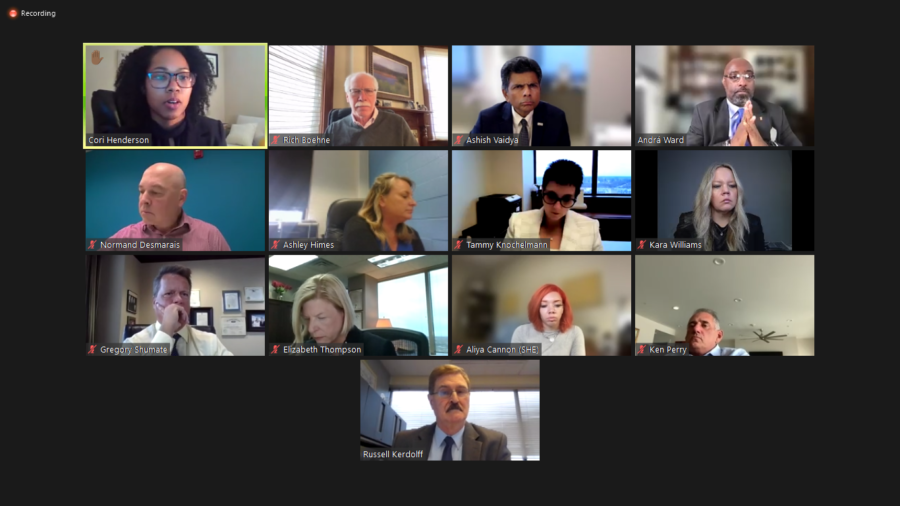 The Board of Regents met over Zoom on Jan. 19 to discuss research and department presentations, budget, recent events and staff changes.

The Board of Regents convened over Zoom for the first meeting of 2022 on Wednesday, Jan. 19. In two sessions, the board discussed presentations by faculty, staff and students, as well as budget, events and recognition of retiring Northern Kentucky University staff members.

In the morning session, the Joint Policy and Finance Committee received three presentations, the first of which consisted of two separate presentations by NKU faculty and students on their research projects. Board members followed up each representation with a discussion of the topic.

Professor of Psychological Science Mark Bardgett presented his sabbatical research, undertaken in the fall of 2021, on the long-term effects of antipsychotic drugs when administered to children. Two students working with Bardgett in his laboratory, Natasha Nail and Karlee Migneault, joined in the presentation.

According to Bardgett, this research enabled a greater understanding of issues that impact children in Kentucky, as well as improved publication records that are vital to receiving grant approvals, strengthened partnerships within and outside of NKU, and prepared students for research careers and graduate work.

Professor Seyed Allameh from the Department of Physics, Geology & Engineering Technology gave the second presentation on the fatigue properties of 3D-printed steel welded onto ceramics. He was joined by three engineering students – Jose Fonseca Lopez, Avery Lenihan and Alexis Eckart – who Allameh said had done laboratory work voluntarily and at different paces.

Allameh concluded that the project enabled faculty growth beyond Full Professor status, connected students to the industry through presentation at the University of Cincinnati, and developed a disruptive technology with potential for commercialization.

“We have the best, most brilliant faculty anywhere in the country,” said Board of Regents Chair Andrá Ward, who thanked the faculty and students for bringing their talent to NKU.

Dean of the College of Education Ginni Fair delivered a presentation on the college’s history and impacts on the community. A very young college, COE only became an independent entity in 2019. Of the nine members in its leadership structure, eight are new either to NKU or to their current office.

Nevertheless, the college has designed and implemented a variety of programs that build, expand and define the education community, from student support groups and services – such as Black and Brown Educators of Excellence, Early Childhood Club, Educator Rising development and expansion – to grants that bring more diverse educators into the field.

Valerie Hardcastle, executive director for the Institute of Health Innovation, delivered the final representation on the impacts IHI has made on campus and Northern Kentucky. These impacts range from acceleration programs to services for substance use disorder in rural counties with limited resources, exemplified by Owen County.

“In this county there is no hospital. There’s no emergency care. There’s no urgent care. There’s three PVC [private care] providers, all of whom are over the age of 60 for the entire county,” Hardcastle said. “Part of our project is not only to help work with the people there who need assistance … because whatever need they have, they’ll have to be referred out of county, and they’ll have to figure out how to get them there and get them back.”

Other IHI initiatives focus on social determinants of health, including Opportunity House, a joint venture with Brighton Center to provide low-income and wrap-around support services for youths attending college, and CARE Closet, which provides free clothing to NKU students.

The afternoon meeting opened with President Ashish Vaidya’s comments on events and developments on campus within the past few months.

These include the Mayerson Student Philanthropy Project, the Student Success Summit, Norse Leadership Society fall retreat, the increase in international student enrollment and Stego Studio, a program launched by Steely Library last September that provides faculty, staff and students with access to high quality prototyping and fabrication equipment, such as 3D printers and laser cutters.

In terms of budget, NKU has received approximately $8 million to cover losses in revenue, which was caused by lower tuition, less auxiliary funds than budget expectations, and a variety of equity initiatives such as forgiving student debts, last semester’s $250 book stipend and mental health fund. The university is seeing slightly better numbers this semester, said Assistant Vice Comptroller Russell Kerdolff.

NKU is currently requesting funding for improvements to the Fine Arts Center and Steely Library. Despite disruption in the global supply chain, NKU has managed to replace elevators in Nunn Hall and Fine Arts Center, replace turf on the soccer field, deliver new pipes to Callahan Hall, demolish Woodcrest Apartments and convert the grounds to green space, according to Assistant Vice President of Facilities Management Syed Zaidi.

President Vaidya welcomed Tammy Knochelmann as the new executive secretary to the Board of Regents, replacing Bonita Brown who has pivoted to focus entirely on Success by Design and Moon Shot for Equity initiatives.

Vaidya also welcomed Benjamin Figueroa as interim vice president of Finance and Administration. Figueroa will hold this position from January through the end of June while the university conducts the search. Additionally, Derek Robertson joined NKU as senior director of Undergraduate Admissions and Morgan Keilholz as Title IX Investigator for the Office of Inclusive Excellence.

A spotlight was given to Leo Calderón, who officially retired from his position as director of Latino Student Initiatives in December. The board unanimously voted to grant Calderón emeritus status in recognition of his achievements and contribution to NKU and the community over 35 years of work.

“I cannot thank my mentor Dr. Leon Boothe enough for giving me the opportunity to be his executive assistant,” Calderón said. “I want to wish my students all the best, all the success. I know that NKU is the best way for them to go in and finish their education. I will greatly miss all of you.”

Priscilla Ayala will succeed Calderón as LSI director. In addition, the Board officially announced the retirement of Athletic Director Ken Bothof. “I want to thank you for your innovation, your hard work, your commitment to athletes. You continue to raise the bar for scholar athleticism,” Chair Ward said.