Bob Barth, an American poet, returned to his alma mater Northern Kentucky University on Thursday and read poems from his latest book. 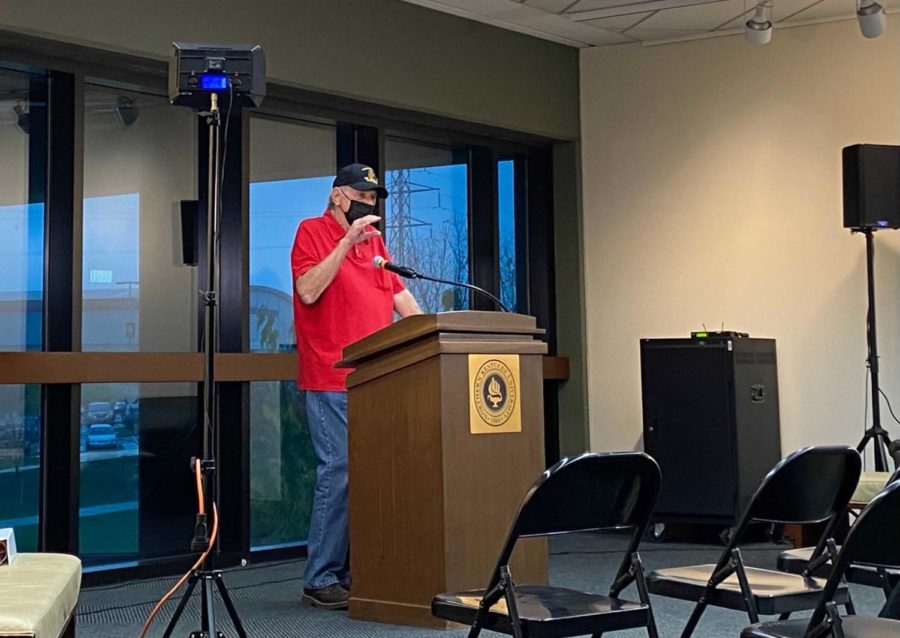 Help wasn’t coming. It was his job. As a reconnaissance leader, he would take a team of eight to ten men and patrol the mountains of Vietnam to survey the land, determine strategic features and locate the enemy. This was war, after all.

It was approaching evening in the jungle when American soldiers ran into a major North Vietnamese army training camp. The Americans noticed the supplies that were dug into the mountainside and watched as North Vietnamese soldiers were being trained to kill them.

The Americans slipped through the North Vietnamese patrols that were circling their position and began to retreat. And then the worst happened. The enemy realized the Americans were there.

Air strikes were called in and the Americans escaped the immediate threat but could not escape the imminent danger. A request for an emergency evacuation via helicopter was made and denied on the basis that the weather was too bad to fly in. The Americans spent the night in the thick brush, sleeping under the canopy of trees, and listening as the enemy probed through the jungle searching for them.

Help wasn’t coming. It was his job. The mission had been accomplished. They had detected enemy presence and gained information about their size and whereabouts. This was war, after all.

This was reality for Bob Barth. This is why the United States celebrates Veterans Day.

At the conclusion of the poetry reading, Barth and the audience visited NKU’s Special Collections and University Archives to see a display of poems, manuscripts, chapbooks, and books he wrote or published.

“I write to try to make art,” Barth said. The majority of his writing revolves around his experiences during the Vietnam War as a patrol leader in the 1st Reconnaissance Battalion in the mountains of Quang Nam Province, Vietnam.

He has published four other books of poetry including Looking for Peace in 1985, A Soldier’s

Barth said he was particularly happy to have been invited to attend the ceremonies at NKU as he and his wife had lunch with two of their favorite professors from their undergraduate days and were able to catch up with a few old classmates.

He said his job is to create a community of personnel, students, and agencies that provide, facilitate, and coordinate programs and services for military affiliated students. Mardis wants his office to be a one-stop resource for any military affiliate to help them accomplish their goals.

Mardis is passionate about his work for veterans because it’s personal. He served in the U.S. Air Force for 24 years and retired in 2014. He said that the military did an amazing job of teaching him how to be a warrior, but “did not teach [him] how to be a civilian again.”

“I got out and nobody wanted me,” he said. Upon leaving service, Mardis felt that there were not enough services offered to veterans and discussed the difficulty of the transition from a mission-based, high-tempo lifestyle to that of a civilian.

Mardis is not the only veteran that feels this way. He said that 76 percent of people who leave the military say that their transition to civilian life is stressful. Additionally, 7.7 percent of college enrolled veterans attempt suicide.

“But there is some hope,” Mardis said. When veterans experience engagement with a resource office such as the one at NKU, they report a 79 percent higher rate of well-being.

NKU currently hosts 200 veterans. They are supported by the community the Veterans’ Resource Center at NKU provides and have access to computers and printing, as well as free meals and snacks.

Christian Varney, a senior marketing major, is one of the many veterans on campus that have benefitted from the Veterans’ Resource Center. Varney served in the U.S. Marine Corps for five years and enrolled in NKU in 2018.

Varney said that the Veterans’ Resource Center helped to provide him with a sense of community. He appreciates that the center puts him in contact with people from a similar background as he believes their shared experiences help them to better understand one another.

For Varney, Veterans Day is a chance to celebrate the friends he made and the relationships he built while in service. “A lot of people like to throw out a ‘thank you for your service’ or you get like a free meal at Applebees,” he said. “That’s not really what I think it’s about.”

To best honor veterans, “just let people know that you’re there for them,” Varney added.

On Veteran’s Day, Mardis reminds us that, “It’s really a celebration of those that have signed on the dotted line to give their life to this country for our freedoms.” He encourages people to ask veterans questions that go beyond the surface and hopes that they will celebrate veterans not just on Nov. 11 of each year, but every day.

When Barth enlisted in the military in 1966, he said he did so because it felt like the right thing to do. While he was in service, he learned that, “[When in combat] Everybody cares what happens to everybody else and that’s pretty extraordinary.” Barth hopes that people will use Veterans Day as a chance to honor those who gave up part of, or all of, their life for something greater than themselves.