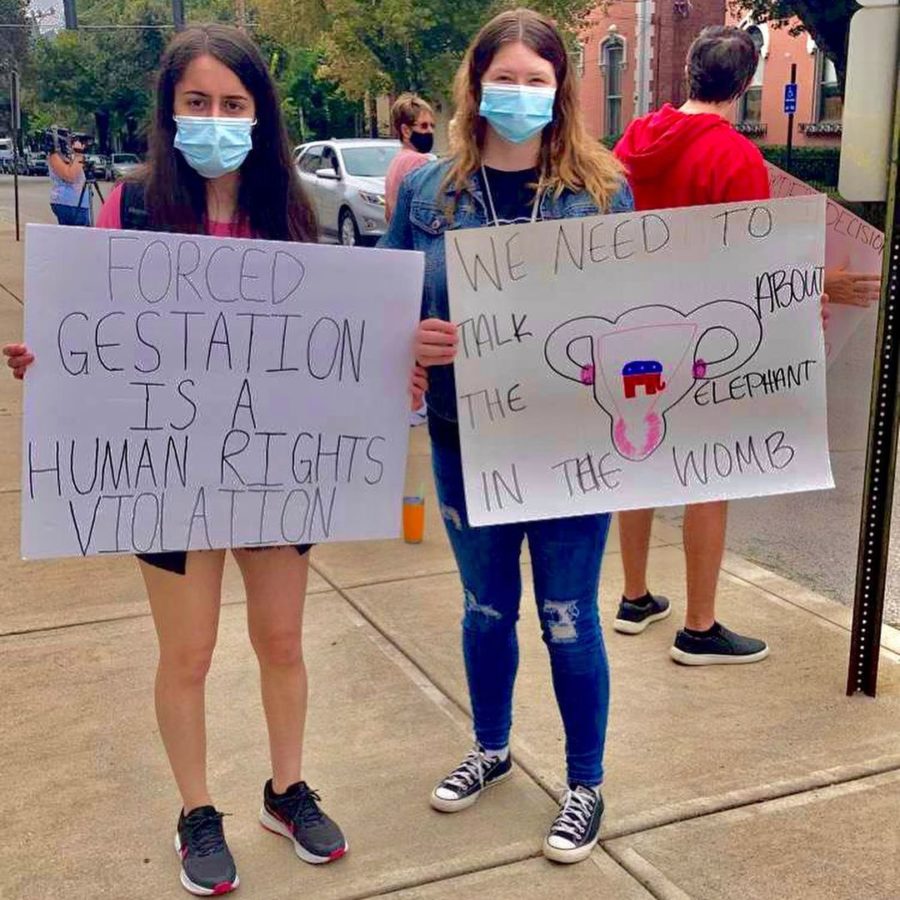 The Organization for Women’s Rights attended the Covington women’s march in April to stand in solidarity with women in Texas.

Among dozens of tables at a crowded Fresh Fusion and amidst numerous flyers scattered around campus, the Organization for Women’s Rights (OWR) may not be the center of attention at Northern Kentucky University. As the Texas Heartbeat Act rekindled the debate around abortion access to greater heights last month, however, women’s rights have been brought to the forefront once more.

“I started [OWR] last year, when I was very passionate about feminism,” said Joanna Swaiss, founder and president. “There wasn’t any organization for that cause then. We worked very hard, and it got off the ground very quickly.”

The organization currently has over 60 registered members. It has three objectives: to advocate for women’s reproductive rights, to educate students on issues facing women and to perform community service.

For community service, OWR is currently collaborating with Sunrise Movement NKY and NKU’s National Panhellenic Council for the Basic Needs Drive, which donates food, clothing and hygiene products to local homes and shelters on Oct. 29.

For education, the organization routinely teaches about the different types and branches of feminism, according to Swaiss. Furthermore, they have created a list of resources for pregnant women: information on childcare, parenting, abortion and adoption. Their website has had over 100 clicks, Swaiss said.

Members are also volunteering at the Ion Center for Violence Prevention and attended a women’s march in Covington on Oct. 1 to stand in solidarity with the women of Texas.

Under the Texas Heartbeat Act, effective Sept. 1, abortion is prohibited once the fetal heartbeat of an unborn child has been detected, which typically begins around six weeks into the pregnancy. The law enables anyone that is not a state or local government official to sue individuals who perform or assist in abortion in any way, medically or financially.

It only makes exception for abortions that are part of medical emergencies, in which case the licensed provider must write documents detailing the woman’s medical conditions and stating that an abortion is necessary to protect her health. There are no provisions for pregnancies that result from incest, sexual abuse or rape.

“It is blatantly unconstitutional. It is disgusting,” Swaiss said of the Texas law. “A lot of women don’t even learn that they’re pregnant during the first six weeks.”

Swaiss added that restricted access to abortion is also a class issue. Richer women are able to travel out of state to receive legal abortion, while poorer women have to undergo pregnancy or go through unsafe procedures and face prosecution.

The Commonwealth of Kentucky passed a heartbeat act in 2019 mandating that no abortion procedure be performed before the licensed provider tries to determine if there is fetal heartbeat. The House passed an act in March this year, which proposes that a new section stating the Kentucky Constitution does not secure the right to abortion or abortion funding be added according to popular vote.

Abortion and women’s reproductive rights remain highly contentious subjects. On Oct. 25 the Center for Bio-Ethical Reform, a pro-life non-profit organization, set up a graphic anti-abortion display in front of the School of the Arts entrance on NKU campus. It met with counter-advocacy from some pro-choice students.

Women are facing many other issues outside of abortion access according to Swaiss. There is a lack of female representation in politics. Women constitute the majority of victims of violence, gender-based assaults and sexual violence. Some laws prevent victims from seeking justice.

Women are also discriminated against economically as those who hold jobs associated with femininity earn less and are respected less. This is not because women are unable to go into high-paying jobs but because they have expectations in the home that men do not have, Swaiss explained.

“A lot of people think that sexism doesn’t exist in the US,” Swaiss said. “While we have it better here than in other places in the world, just pretending that everything is perfect would be false.”

Feminism and women’s rights do not stand independently of other social issues either. OWR ensures that there is diversity among its membership. “We have a lot of members who are people of color and LGBTQ+,” Swaiss said.

When members first join OWR, they are asked the pronouns they prefer to go by. The organization also teaches students about intersectional theories, such as how Black women do not face racism and sexism separately.

Assistant Director for Student Engagement Emily Sagraves describes OWR as very active on campus, always among the first to sign up whenever there is a tabling event.

“This student organization provides a really unique opportunity for students to become a voice on campus. They can bring in other students who share their interests and voice their opinions,” Sagraves said. “It’s power in numbers.”

According to Sagraves, historically in higher education student groups have tended to be formed around certain events. During election years, for example, there are a greater number of political groups.

The registration process for student organizations is simple, Sagraves said. Every semester there is a month when students get to fill out applications and talk to Sagraves to make sure their mission does not conflict with something else and they know what they are getting into. They will then write their constitution, attend the President’s Academy and pay the fee to formally set up a student organization.

“We have a lot of social justice-focused organizations. Our students are very excited and passionate about social justice,” Sagraves said.

Swaiss hopes that more students will consider joining OWR. “You’ll meet a lot of wonderful women and get to be part of a community in general,” she added.

To learn more about the Organization for Women’s Rights, visit their page on Presence or contact them on Twitter @nku_owr.