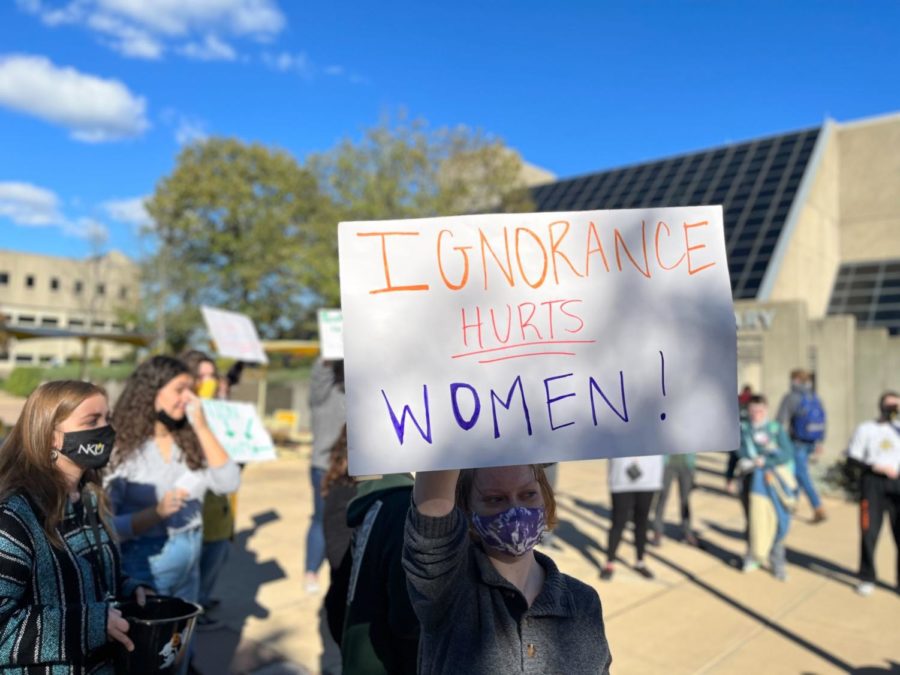 An anti-abortion display was set up on Oct. 25 and 26 in front of the School of the Arts entrance. The display’s intense imagery of aborted fetuses and comparison of abortion with genocide drew criticism from several students, some of whom began pro-choice demonstrations nearby.

From either side of the main campus walkway, passersby would be greeted with signs warning of ‘genocide photos ahead’. On a three-sided stand, images of supposedly mangled and bloody fetuses were juxtaposed against photographs of the Holocaust, the Khmer Rouge genocide in Cambodia and Jim Crow-era lynchings of African Americans.

Around the stand, volunteers distributed pamphlets that list several points of comparison between abortion and genocide, using the same images as the display.

“We do not equate aborting mothers to Nazis; many such mothers are themselves victims,” the pamphlets read. “Our purpose is never to condemn anyone for past abortions, but to protect children and mothers from future abortions.”

According to the pamphlets, the event was organized by the Center for Bio-Ethical Reform, a non-profit anti-abortion organization. The organization’s website lists its executive director as Gregg Cunningham, a former member of the Pennsylvania House of Representatives “where he introduced legislation which ended public funding for abortion,” the website states.

This is not the first time the Center for Bio-Ethical Reform has used graphic images to communicate their pro-life message. The organization has set up similar displays at university campuses around the country and came to Northern Kentucky University five or six years ago, according to a volunteer named Karl.

Karl, who has been volunteering for the organization for four years, said these images are an effective way to convey their message.

“We use William Wilberforce as an example because he showed what slavery really looked like, so [when] people who thought they supported or supported slavery before actually saw how hard and inhumane it was, they changed,” Karl said. “So we believe that [when] people see what abortion really is, it will change hearts and minds, and we see it.”

Karl said the reception to the display at NKU was mixed but pretty calm compared to some other colleges. The faculty had been good and students had been respectful for the most part, he added.

After the display went up, students from an activism class by Director of LGBTQA+ Student Initiatives Bonnie Meyer set up a pro-choice table next to the second floor Student Union entrance. Students began to write chalk messages that advocated for bodily autonomy and reproductive rights, gave positive affirmation and warned of the display ahead, from the table to along the walkway.

Near the display, students held up signs with pro-choice messages. Members of various student organizations — the Organization for Women’s Rights, Sunrise Movement Northern Kentucky, Friends of Dorothy, among others — and individual students demonstrated against the anti-abortion messaging on Oct. 26. They offered candy and little notes with positive messages to passersby, chanting and dancing as a group in front of the Steely Library entrance.

“We’re all just a bunch of students having some fun while we’re trying to outshine the negative environment that some people brought to our campus,” said Jimmy Renton, president of Sunrise Movement Northern Kentucky.

Renton said the graphic imagery might bring up bad memories for those who have survived sexual assault and domestic violence. He also disagreed with the comparison between abortion and genocide.

“While the Holocaust is a genocide, abortion is not a genocide. It does not fit the definition of genocide, so what they’re showing is misinforming, it’s wrong, and it’s not appropriate for our campus, especially when you consider that we are a campus that has quite a bit of sexual assault survivors and domestic abuse and violence,” Renton said.

Other students who gathered near the display — “to reinform the misinformed about reproductive rights and the actual validity of pro-life,” they said — expressed disapproval of different aspects of the display. An African American student said the image comparison is disrespectful toward the descendants of slaves, Jim Crow era and Holocaust survivors.

The organizers refused to let pro-choice students speak and their arguments were based on Christianity rather than statistical data, the students said. Furthermore, the students were concerned that there was no trigger warning for rape.

According to the students, the organization was ultimately there to make others angry and scared, not for what is right.

“If you truly care about what you came here to talk about, you come here and say it. You wouldn’t come here and do the insensitive ‘This is what you’re doing. Feel guilty,’” the African American student said.

Renton encouraged students who are against the Center for Bio-Ethical Reform’s messages to join left-leaning organizations like Sunrise Movement, College Democrats and Northern Kentucky Young Democratic Socialists of America.

“So definitely get involved with organizations that are advocating against this kind of stuff, and remember to be a positive light when people with this negative energy come on campus,” Renton said. “Be that positive light for people so that we can have a better experience at NKU, no matter who comes to our campus.”