How Sandra Bazzani has become a leader for students on campus 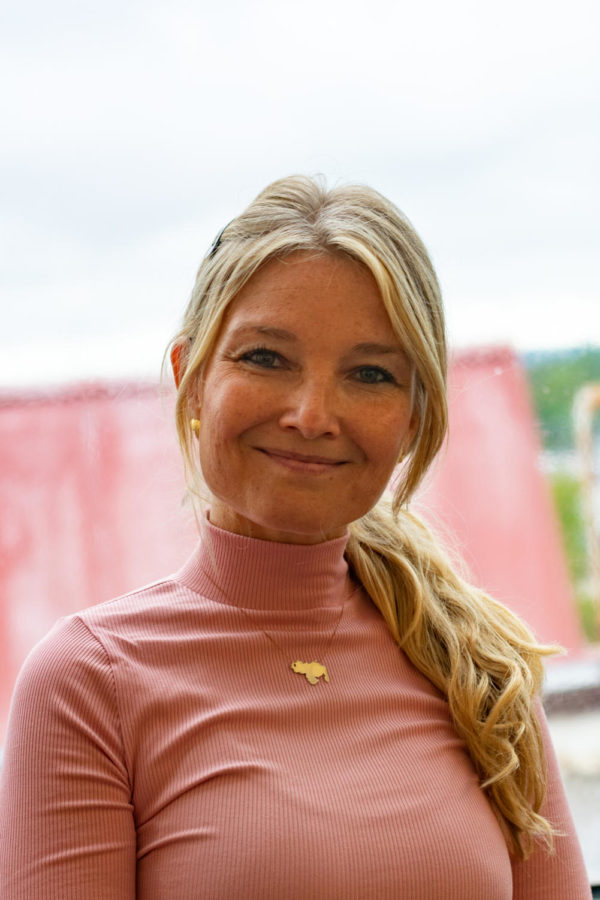 Sandra Brazzani has emerged as a leader on campus for the celebration of National Hispanic Heritage Month.

Sandra Bazzani’s Spanish faculty office is tucked deep inside the Department of World Languages and Literature. On the wall opposite her desk hangs a huge graphic that depicts service learning projects with Indigenous communities in Venezuela. On the desk, next to her computer, is a box of Mexican snack cakes that she plans to give out to students for National Hispanic Heritage Month.

“I’m in love with my culture. I consider myself an ambassador to it,” Bazzani said. “This month is even more special.”

Bazzani was born in Valencia, Venezuela to Italian immigrant parents, who sought new opportunities in the South American nation following the devastation of the Second World War. She studied languages at a Catholic university in Caracas, the capital of Venezuela, and started working in Canada after her marriage in 2001.

Her love for teaching, Bazzani said, began when she was given the opportunity to teach Spanish at a college in a small Canadian town. She studied Law and earned a Master’s degree in teaching Spanish as a second language.

Her husband’s career with Procter & Gamble then took them from Canada to Cincinnati. Bazzani worked at the University of Cincinnati and Xavier University before coming to Northern Kentucky University in 2015.

As a Spanish lecturer, Bazzani ensures that her students do not only learn the language but also get to immerse themselves in the culture. For this reason, every semester she takes her students to a food truck in Fountain Square in Cincinnati, where they can order food in Spanish and practice the language with her family.

For National Hispanic Heritage Month this year, which lasts from Sept. 15 to Oct. 15, Bazzani took her students to a concert organized by Empanadas Aquí, a Venezuelan restaurant in Cincinnati. The concert took place on Sept. 25 and local Latino artists were invited to perform.

For Bazzani, music is part of the immersion process. She plays Latin music in her classes so that students can understand its rhythm. She also teaches her students the names of Hispanic people who have had an influence on her life and the community, such as her friends from Venezuela who have gone on to pursue successful careers in the United States.

“You want them [the students] to be more motivated to learn, more inspired, more immersed in the culture,” Bazzani said.

According to Dr. Caryn Connelly, Chairperson and Associate Professor of Spanish, Bazzani is heavily involved with organizing events on campus and in the community. She is going out in the community with students and has brought speakers on campus, including local and national Hispanic lawyers.

Bazzani is especially passionate about service learning projects, in which students get to learn about, interact with and provide support for Indigenous and Creole communities in Venezuela.

“She’s very involved with her projects in Venezuela,” said Irene Encarnación, senior lecturer in Spanish at NKU. “She’s a very young talented faculty [member]. We hope to recruit more Sandra’s in the future.”

According to Encarnación, two years ago Bazzani invited some Venezuelans to the Department of World Languages and Literature. It gave the department a new perspective on the economic, social and political situations in Venezuela that are driving a great number of immigrants, including professionals, to the US.

“Not all immigrants come from the same place, and we all have different reasons,” Encarnación said. “Some are here for professional development. Some want to support their families. Some simply want to follow the American Dream.”

For Bazzani, immigration is one of the greatest challenges faced by the Latino community in the US. The problem is becoming more common as difficult economic and political situations in Latin American countries are pushing more people to leave, Bazzani said.

Bazzani hoped that the Latino community could have more opportunities and more jobs. She is proud that one of her Venezuelan friends is a vice president at Procter & Gamble and another friend has been helping the community with psychiatry at the University of Cincinnati. She is also proud that her nephew, whose photograph is framed on her desk, graduated from NKU with a degree in Global Supply Chain Management.

“I’m very happy when I see my students have success,” Bazzani said, recalling a student who wrote to her in Spanish to say that she was working with Bazzani’s husband for Procter & Gamble.

When asked about challenges posed by the COVID-19 pandemic, Bazzani said things are getting back to normal this fall semester. She teaches face-to-face classes on Monday and Wednesday, online classes on Friday.

“I think we’re going back to normal,” said Leo Calderón, Director of Latino Student Initiatives. “But we need to go ahead, develop, bring back students and create that college experience … and at the same time, keep up with COVID protocols.”

According to Calderón, National Hispanic Heritage Month has been celebrated at NKU for 20 years, beginning in 2001. Its purpose is to bridge the gap between NKU and the wider community and showcase the Latino community’s rich history.

Hispanic Heritage Month at NKU typically includes a Latino lecture series where prominent figures and activists are invited to campus to talk about their disciplines.

“We try to deviate from that this year,” Calderón said. One of the key events this year is Carnaval del Barrio — meaning “carnival from the neighborhood” — held on Sept. 24. It featured the Cuban Amador Sisters, the student-led NKU Latin Jazz Combo and the Latin music ensemble Son del Caribe.

“It was important for us to have an outdoor event, to bring in faculty, staff, students and people from the community,” Calderón said. “We had a keynote speaker to do presentations online last year and it was well attended, but we need that intimacy, that human contact. We need to be around people.”

Other events celebrating Hispanic Heritage Month include the Kick-off Reception on Sept. 15 featuring Marilyn Zayas, the first Latina judge to be elected to an Ohio Court of Appeals; “A Diverse Diamond: Negro League, Cuban and Latin American Baseball” presentation on Sept. 22; “In the Heights” movie showing on Oct. 1.

When asked about her plans for the future, Bazzani said she would continue with her career and service learning projects and possibly work on a PhD.

“Globally there are 559 million people who are Spanish speakers. 13 percent of the English-speaking population speak Spanish at home,” Bazzani said. “I want students not only to learn Spanish in class, but to continue learning so that they can open doors in their lives.”

Correction: The print version of this article misstated Sandra Bazzani’s name, education and estimates of the number of Spanish speakers. These errors have been corrected in this article.