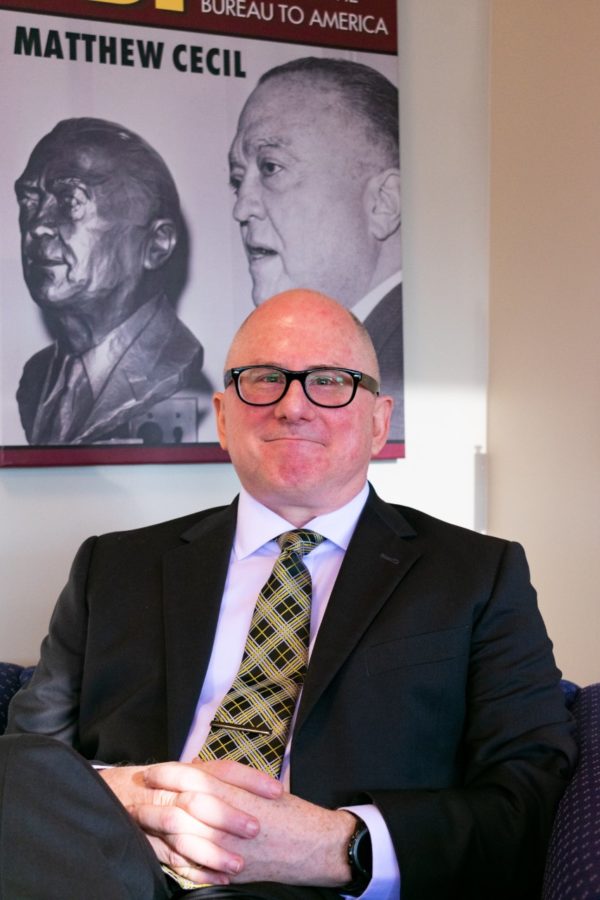 This story was previously published in The Northerner’s print newspaper on Sep. 1.

Dr. Matt Cecil was selected as the new Provost and Executive Vice President of Academic Affairs on July 1 following a months-long search effort. With an extensive background in journalism, public relations and administration, Cecil joins Northern Kentucky University with a vision for a post-pandemic campus.

According to Bonita Brown, Vice President and Chief Strategy Officer at NKU and co-chair of the PEVPAA Search Advisory Committee, Cecil was one of the strongest candidates for the position. The selection was made after a nationwide search, countless resumes and hours of Zoom interviews.

Cecil said that his interest in the position was prompted by the president of Minnesota State University, Mankato, who worked very closely with President Ashish Vaidya of NKU and encouraged him to get involved.

“This university is poised for great things,” Cecil said of NKU. “This institution has the kind of mission I believe in. It is here to help students gain socioeconomic mobility, to help the region become economically strong. It made me very hopeful that I’d get the offer from President Vaidya and the staff I’d met.”

Cecil was the Dean of the College of Arts and Humanities at MSU Mankato for four years. According to his former colleagues, he was overseeing various liberal arts, fine arts, music, theatre, English and communication programs. He was named Interim Provost at MSU Mankato shortly before the beginning of the COVID-19 pandemic, a position he held for one and a half years.

Cecil had a leadership role in helping the university transition to an online model within two weeks, said Henry Morris, Vice President of Diversity, Equity and Inclusion at MSU Mankato. He also helped establish the university’s School of Education, according to Brian F. Martensen, Interim Provost at MSU Mankato.

“He’s very caring,” Martensen said. “He cares first and foremost about students and their experiences … He’s a really fantastic colleague, because he thinks about ways he can support you and help you develop.”

For Cecil, college campuses are about the opportunity for all to gain in education. He did not find what he was looking for at large research universities, which had bigger global missions and were not as focused on student support. Such support, research and access to education is more easily found at smaller institutions like NKU, MSU and Wichita State, Cecil said.

One month into Cecil’s appointment to office, NKU announced a new indoor mask mandate for all individuals on campus as the Delta coronavirus variant continues to drive cases nationally and regionally.

“I want to caution people not to get ahead of themselves,” Cecil added. “Right now what we have is a mask mandate indoors. There is no requirement on anything else … If we learn anything through this, we need to learn how to adapt at anything.”

Brown said that the administration is being ‘cautiously optimistic’ as pandemic information and requirements are constantly changing. The university is working with faculty to ensure that they have what they need for their classrooms and is acknowledging everyone’s fears and concerns, she said.

“We don’t need to add to people’s stress. You don’t know what people are going through,” Cecil said. “We’re just encouraging people to be patient and calm and sort of address issues as they arise, and we’ll get through this again just like we did before.”

Cecil encouraged vaccination in the community if pandemic restrictions are to be rolled back. He also encouraged other methods of care, whether by wearing masks to keep each other safe or being with friends throughout the semester.

Cecil believed that there would be a transitional semester to a post-pandemic campus. He envisioned a hybrid campus where various student audiences, such as adult learners, are provided with the programs and services they need.

“People have been going through a lot. A lot have been questioning where they are in their lives,” Cecil said. “We’ll be there to serve these people, whether they are looking for undergraduate or graduate degrees, looking for a handful of courses or different skills.”

Brown mentioned a ‘Hybrid U’ where there are in-person and online options for many services, citing the success of online mental health advising and chatbots on certain pages like financial aid.

“So we’re looking at Hybrid U, and we’re looking at economic engagement,” Brown said. “This region really depends on NKU to lead some regional economic work and we want to make sure we’re living up to our role, our responsibility in this region.”

According to Brown, a post-pandemic campus will feature a first-year advising center to advise all first-year students the same way and degree mapping to ensure students know what classes they need for their degree programs.

The administration will work with faculty so that classroom curriculums will provide students with high impact practices: community service, opportunity and internship, group work with other students. Focus will also be placed on identifying, removing or modifying barriers to students’ application and admission.

Brown said that as provost, Cecil has one of the most difficult jobs on campus. He is responsible for all of the colleges, working with the faculty, hiring and retaining good faculty members, ensuring that NKU’s programs are in line with what the region and what employers want.

“I think he’s the person for the job,” Brown said. “He’s done this role before and again, with his passion, combined with his expertise, I think we’re gonna see great things and I’m excited about partnering with him on a lot of this work.”

“I think it’s a wonderful match,” Martensen said of Cecil’s selection as provost at NKU, adding that the wide range of students at NKU is an excellent fit for him. “Matt has an ability to honestly look at what’s needed very quickly to understand a place … I have no doubt the place will benefit from his knowledge.”

Morris wished that Cecil would have remained at MSU Mankato, but understood that sometimes one needs to move on.

“I remember trying to keep him here. Your gain was our loss,” Morris said. “He’ll do good work. He’ll be committed to you while he’s there. I think you’re getting a well-seasoned, experienced senior academic leader.”

When asked what he was looking forward to the most in the Fall semester, Cecil mentioned that he was seeing his family for the first time in two years.

“Keeping our spirit up and working hard remind us of why we do what we do,” Cecil said. “The energy of a college campus in the fall is really special. I’m hopeful to be as normal as we can.”