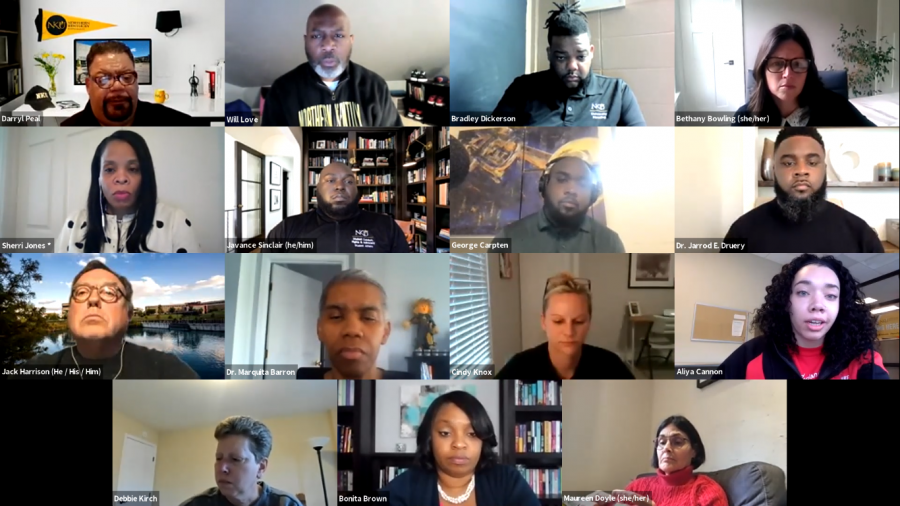 The Bias Incident Response Team was introduced in a Zoom town hall discussion on Wednesday, April 21.

The Office of Inclusive Excellence introduced the Bias Incident Response Team in a public town hall discussion via Zoom on Wednesday, April 21. Based on Northern Kentucky University’s Bias Incident Response Protocol, the team is tasked with responding to reports of incidents involving bias and prejudice on campus and creating a more supportive campus environment. Incidents can be reported anonymously by students, faculty and staff, either as victims or as witnesses, through the online Bias-Motivated Incident Report Form.

The protocol defines bias incidents as “verbal or nonverbal conduct that is threatening, harassing, intimidating, discriminatory, or hostile; and is intended to target and marginalize people based on their social, political, racial, gender, or religious identities.” Bias incidents include and are not limited to prejudice and discrimination based on age, color, disability, gender identity and expression, race, ethnicity, national origin, religion, sexual orientation and identity.

According to the protocol, BIRT will assess reports on a case-by-case basis for the type, severity and impact of conduct and respond to it accordingly. This includes referring the report to an appropriate university office, such as Title IX or University Police. Reports should be processed within 48 hours, according to Darryl Peal, Chief Diversity, Equity and Inclusion Officer, Title IX Coordinator and BIRT member. BIRT will also provide outreach, support and necessary resources for victims of bias.

The protocol states that, “The University is committed to holding perpetrators of bias incidents accountable through the procedures established for handling violations of University policy.” BIRT’s response to biased individuals may include training and development opportunities, educational conversation, intervention and corrective action.

Peal said that the goals of the protocol and team are to support and educate students, faculty and staff affected by bias, not to conduct investigations or silence free speech.

“Part of the issue is living with the First Amendment freedoms we have; that also means that we are not in the position to silence people,” said Jack Harrison, professor of law and BIRT member during the town hall discussion.

“But one of the things that the First Amendment rights do allow us is to respond to that speech. There is nothing that says that speech cannot respond to speech, so if there is offensive speech, that certainly invites the opportunity for debate, discussion, response—not in a threatening way but a respectful way.”

According to SGA President-elect and BIRT member Aliya Cannon, BIRT will look into university policies to make sure they do not enforce prejudice against any group, promote understanding and appreciation of diversity on campus through education and proactive programming, leverage institutional resources to help influence and change policies and assess campus climate by making the bi-annual campus climate survey more robust.

“Our goal is to create a campus community where students, faculty and staff can thrive socially, academically and with diversity and civility of practice,” Peal said. “Everyone working or turning to NKU should be able to be here free of fear, from all forms of violence and feel safe as they go about their lives, whatever their ethnicity, ability, faith, age or sexual identity is.”

BIRT consists of faculty members, representatives from various university administrative offices and student groups. Team members include diverse representation who have stood out in different roles across the university, according to Dr. Bethany Bowling, Associate Dean for the College of Arts & Sciences, professor of biological sciences and BIRT member.

“I think the fact that we’re here, that we have a protocol, means that everyone should know where to go to report these types of events, and I think that’s really important,” Bowling said. “I think we can do things to help individuals who don’t even realize that they’re being biased, and we’ll have support for those individuals. ”

Because BIRT is made up of diverse individuals on campus that everyone should know in some capacity, Cannon believed that students will respond to the team very well and hoped that they will see that they have the support they need.

“I feel like there’s always room for improvement, but because this team is still new and we’re navigating ourselves as we move forward, I’m just excited to see us become established and us just really go out there,” Cannon said. “I hope that students, faculty and staff start using the team and that it is there as a support system, and I think I’m just ready to get it out there, ‘Hey, this is our team and this is how we can help you.’”