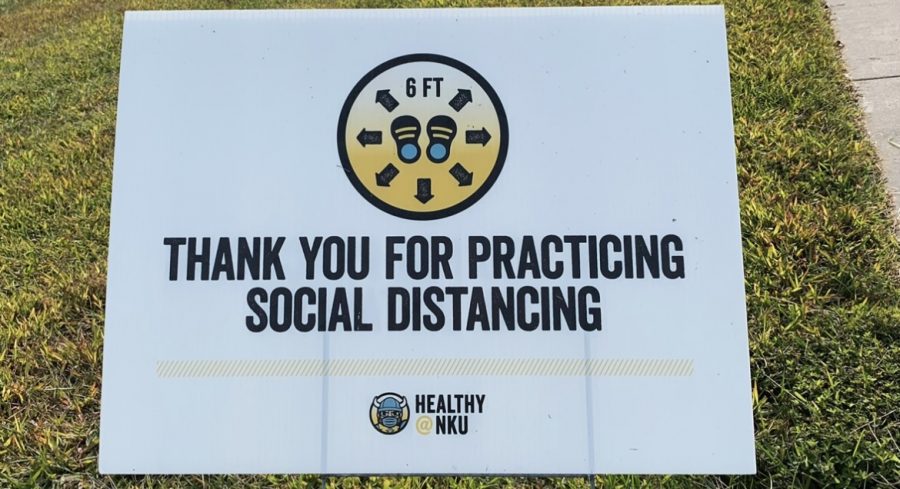 Social distancing sign in front of the Rec Center.

‘Science is not political’: Faculty discuss COVID-19 cases and vaccines

NKU COVID-19 cases have been tracked for the last year or so and have, overall, been low compared to the rest of the surrounding Northern Kentucky counties. However, steps still need to be taken to overcome this virus once and for all.

Hardcastle said NKU has taken the pandemic on from its early stages, which have helped the campus’ positive cases remain relatively low.

“I think NKU from early on has taken the pandemic really seriously and so our guidelines—in many respects, I think—have been stricter than other universities and we fared much better,” Hardcastle said.

Hardcastle added that students have also made an impact on keeping the positive cases low.

“I think the other thing that I can call out is I think our students took it seriously. We just didn’t have the same issues that we saw at some institutions, where students were flagrantly ignoring the guidelines and then becoming superspreader events. I’m not saying that every [NKU] student always followed all the guidelines at all times, but comparatively speaking, we were just much better in kind of staying in our own lane and doing what we needed to do,” Hardcastle said.

Hardcastle was one of the people who helped start NKU’s COVID-19 dashboard, where you can view the number of active cases at NKU throughout surrounding counties and states and can report to NKU if you have tested positive for COVID.

“We weren’t doing it [the dashboard] at first, but we were tracking the cases because we felt like we needed that information. Then we developed the online tracker where if you test positive, we want you to input your information online so we could kind of get everything centralized,” Hardcastle said.

NKU did not initially publicize the number of active positive cases due to a very low amount of positive cases, which came with pressure to make the case numbers public.

“Other universities started publicizing their numbers as we were just getting a lot of political pressure to do the same thing, but our challenge was we had so few cases that we couldn’t publicize the numbers because the one thing about medical information is that it is something private,” Hardcastle said.

Hardcastle said only 40 percent of our region has received at least one dose of the vaccine.

“That is not enough to prevent a spread of the disease,” she said. “That’s less than half of the people being vaccinated.”

Hardcastle said her biggest concern with students returning to in-person classes next semester is those who are not doing what they are supposed to remain safe during the pandemic.

“People are too eager to be done with this and they’re not doing what they need to do to stay healthy. So, I’m worried that people will come to campus and they’re going to pretend like it’s pre-COVID without ensuring that everyone has been vaccinated who should be vaccinated or can get vaccinated, whatever it is,” Hardcastle said.

The effects of COVID have not changed much since the start of the pandemic in 2020.

“COVID is still just as contagious and just as awful and potentially deadly as it was a year ago,” Hardcastle added.

Hardcastle encourages people who are skeptical of receiving the vaccine to educate themselves as much as possible with the best data possible.

“The truth is, science is not political, facts aren’t political, the deaths from COVID-19 are not political. And I know there are a lot of political divisions about how one should behave and react to COVID-19, and that’s unfortunate because I think it gets in the way of doing what I’m just going to assume most people actually know is the right thing to do,” Hardcastle said.

Tempel said everything has been a long process between attending meetings and planning for vaccine distribution throughout NKU, something she had planned out before this past December.

“Things change, as we’ve all found out, and things go along … it’s been an overwhelming year of stress, but I do it because I want people to get back to normal as much as possible for their own mental health, for my mental health and for everybody’s well-being,” Tempel said.

How will NKU ever return back to normal? Tempel said the next step for the campus community is to get vaccinated.

“If people really feel like they don’t want to be vaccinated, that’s their choice—and they’re going to have to be even more vigilant to wear their masks, social distance, wash their hands, all those other mitigation things because they are not protected,” Tempel said.

Talitha Edwards, junior chemistry major, said she has stayed safe during the pandemic by taking it seriously and distancing herself away from people as much as possible.

“I didn’t leave the house for like six months … I probably saw less than 20 people in person last year,” Edwards said.

Edwards said although she is fully vaccinated, she is still practicing COVID-19 safety protocols.

“For the most part, I’ve been very cautious with hanging around others and wearing my mask,” Edwards said.

When many students return back to campus next semester for in-person classes, Edwards said one of the things she is going to refrain from doing is touching things in public.

“I didn’t realize how many public things aren’t cleaned regularly, so I’m not going to be touching things in public as much. I’m in microbiology this semester so it’s been really cool to look at microbes and just understand and be aware of just how gross things are in general, even without a pandemic,” Edwards said.

Edwards feels comfortable going back to in-person classes next semester.

“I feel pretty comfortable. I go by the motto of, ‘As long as I’m safe and treat everyone like they’re contagious, then it will be okay.’ It’s kind of like whenever you’re driving, it’s just like, ‘I know I am a safe driver and no one else is,’” Edwards said.