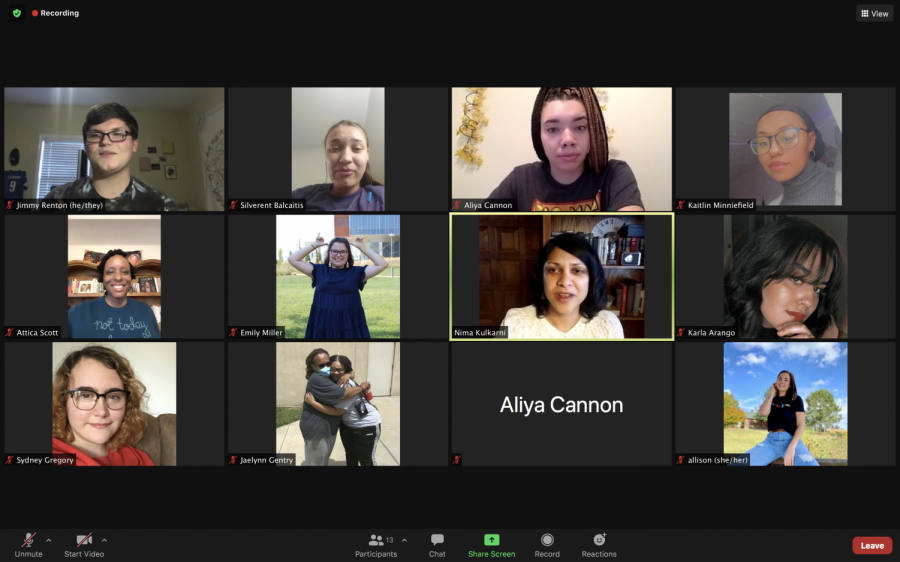 Attica Scott and Nima Kulkarni are both Democratic members of the Kentucky House of Representatives, representing districts within Jefferson County. Recently, Rep. Scott put forward a resolution, which Rep. Kulkarni co-sponsored, that urged the Kentucky Congressional delegation to support the Green New Deal. Both state representatives said climate issues have historically and currently target people of color in their underserved communities. By enacting climate policy on a state and national level, it will increase the health of constituents, create more career opportunities, and narrow the disparity of those impacted by climate issues.

Cannon said she wanted to use this town hall to learn more from Scott and Kulkarni as women in important positions and gain better insight in climate justice. She said NKU’s administration has tried to tell her that “you can’t be an activist and a president at the same time,” so she is currently trying to navigate that balance.

“I’m really nervous because I’m like, ‘Okay, I don’t know. What am I doing? Am I gonna do this right? Is this gonna be wrong? But then I realized, when you’re doing something for the right reasons and you’re doing it for the people and you’re doing it because there’s so much oppression and bad things going on in your area and in your community, then you’re never going to be in the wrong—even if something doesn’t go all the way right. At least you were the one that got up and took that step and made that change,” Cannon said.

How climate issues intersect with race

Scott described herself as a “climate justice champion” in her opening statement, and she claims America is in a state of emergency due to significant climate issues. She said it is imperative that people act on climate justice now, but in order to do so, they must be fully aware of the complete picture of climate issues, which have systematically targeted and exploited people of color since the beginning of American history.

She knows the impact that climate issues such as pollutants have on people of color due to her own experiences.

According to Scott, areas that have a predominantly African-American, indigenous or people of color population “bear the heaviest burden” of chemical companies that pollute the air they breathe and water they drink. She said current racial issues, such as the increased probability of black mothers dying in childbirth as compared to white mothers, has environmental factors that are contributors.

Kulkarni also highlighted how environmental policy, such as Kentucky’s adoption of the Green New Deal and Biden’s Federal American Rescue Plan that includes climate legislation, can strengthen the infrastructure of climate justice to help those most impacted.

“It’s going to help the environment, and on that same level, make a little bit of an even playing field for all of these communities that have been, again, exploited and subjugated geographically, as Rep. Scott said. We’re still dealing with neighborhoods that bear the brunt of some of these polluters in their backyard versus other neighborhoods that are so far removed from it, they’ve never had to deal with it, think about it or see the consequences of it,” Kulkarni said.

Kulkarni said many social issues, such as systemic racism and climate issues, are linked in such a way that they create “ripple effects” that exacerbate every challenge and struggle that someone in need is going through. It’s important to understand the intersectionality of these issues in order to implement meaningful change in one’s community, Kulkarni said.

“If everybody had enough food, had a place to live, had enough water, you would be looking at an entirely different world. And so anything that you can do to make that world possible is something you should prioritize because it doesn’t have to be one issue. One issue is not more important than the other; they are all connected. No matter how small you think this one issue is over here, it will have a ripple effect and an impact on a larger issue potentially down the road. And so I think we need to really think about how we approach these issues and not look at them in silos and not just say, ‘Well, I only need to look at this one issue because it affects me or it affects my community,’” Kulkarni said.

Kulkarni described the Green New Deal as a “framework” that will jumpstart change in climate policy and create new opportunities.

While America is a democracy, it also has a capitalist economy that is primarily profit-motivated with real people’s health and sustainability as lower priorities, according to Kulkarni. Climate justice policies will make corporations and governmental bodies reprioritize people’s health, which will have positive ripple effects on the economy.

“When you think about our framework like the Green New Deal, it’s not necessarily one policy here, one policy there. I think it is a larger way to think about how prioritizing the environment that we all have to live in—every single one of us needs air, every single one of us needs water, every single one of us needs a place to shelter,” Kulkarni said. “When you start thinking about it in terms of people, then the rest will follow. You have a healthier workforce who’s going to be more productive [and] is going to be happier at work, you’re going to have companies that are working on sustainable news—whether it’s wind, energy, solar, clean water—I mean, there’s innovation there and there’s new companies and therefore there’s new jobs.”

Ways that people can make an impact

SGA President-elect Aliya Cannon reflected on her own recent experience with climate justice. She said she didn’t know a lot about sustainability until she started attending NKY Sunrise meetings and realized how important campus sustainability is.

From her own perspective, Cannon believes that education is the first key to change.

“How do we educate everyone in the way that they can learn and understand because not everyone learns the same way, and that’s okay, but we have to make sure they have that information. Because change can’t come if you don’t understand why you’re trying to make that change. I believe everyone would want us to have a sustainable country, to be green, to be taking care of things, but we don’t really know how it works or the process or how all of these things that are in America are really hurting us on a regular basis,” Cannon said.

Cannon also emphasized campus unity on this topic. She referenced the “Power to the People” march that will take place on campus this Monday and discussed how people should ban together and share resources to support their fellow campus community members. She referenced NKY Sunrise as a valuable resource in education about sustainability.

“Having the education, having the resources and that we’re united so that we can actually face these challenges because we are all dealing with them in some way, form or another. We need to work together to get a positive solution from it,” Cannon said.

In response to a question about how to make an individual impact, Kulkarni said that people can organize environmental protests and, most importantly, utilize their ability to vote for local positions such as representatives and judges.

Kulkarni said there are several resources in how to look up a politician’s stance on issues such as climate justice that people should use.

“I think that not being informed is a choice that people make in this day and age and it’s a choice that young people can’t afford at this point or any point moving forward, so it’s really, really important to know all of those folks and what they stand for,” Kulkarni said.