What you missed at SGA: LGBTQ discussion, appointment of two new senators 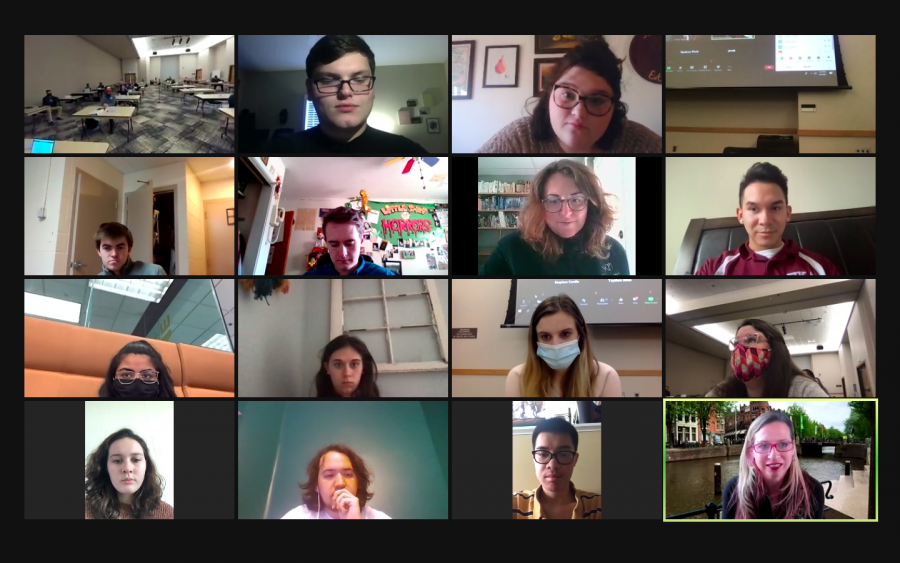 This semester, SGA senators have the option to attend meetings in-person or virtually.

Today’s SGA meeting started out with a short presentation by Bonnie Meyer, NKU’s director of LGBTQ Programs and Services.

Meyer went over what programs and services the LGBTQ office provides, including:

Meyer announced that pride week will be held April 12-16. There will be one small in-person event held on campus on Thursday, April 15 at 12 p.m.

NKU was given a five-star rating on the Campus Pride Index which is an “overall indicator of institutional commitment to LGBTQ-inclusive policy, program and practice,” according to the CPI website.

Meyer said that there is still work needed to be done about the discrimination throughout the LGBTQ+ community.

“Compared to before the start of the COVID-19 pandemic, 30% of LGBTQ college students have heard their family make negative comments about LGBTQ people more often, 35% of LGBTQ college students are lying to their families about being part of the LGBTQ community more often, 37% of LGBTQ students of color have experiened an increase in white LGBTQ people saying things that are racist and 44% have hidden their LGBTQ identity from other people more often and 32% of trans and non-binary students have reported increased disrespect of their gender identities more often,” Meyer said.

Meyer also went over gender identification, gender expression, sexual orientation, pronouns and what it means to be an ally in the LGBTQ+ community.

Reynolds said he wanted to join SGA because he wants to make campus more sustainable and well-known.

“I would love to work on initiatives to make NKU a more greener, more sustainable campus. I would love to work on the NKU brand to help enrich our prestige both within the region and within the state and in the country as a whole because I think NKU is in a unique spot right now, to where we’re a big campus, we’re a big college, but we still have room to grow. So I think these next 10, 20 years are imperative to have strong leadership, both within the [student] government and the student body, so I’d like to partake in that,” Reynolds said.

“I wanted to basically better implement things for minority students who may feel disconnected from campus essentially, and I really also wanted to kind of focus on intersectionality and bringing the different communities and people’s different identities together so that they can feel like a whole and a part of this campus,” Edwards said.

Senator Aliya Cannon asked the two newly appointed senators what their definition of being an ally is and how they can be an ally to students on campus.

“My definition of an ally is someone who is willing to come with you and meet you where you are and support you in the ways that you need to be supported and also make sacrifices in order to make sure that your existence is comfortable. How I practice to be an ally is just meeting people where they are, listening to them and using my privileges that I may have or the access to things that I may have in order to help uplift them to a space where they feel complete and comfortable,” Edwards said.

Reynolds defined being an ally as someone that doesn’t try to out-speak or talk over a person of the marginalized person in a situation.

“I would try to elevate and give these marginalized communities a platform, and I would do this by attending meetings, I would go to events and I wouldn’t say much. I think it’s important to be a great listener as an ally. I think listening is a whole lot more important than speaking, and speaking when it’s necessary and speaking when it’s hard. Being a voice when they aren’t there to speak for themselves I think is the most important thing an ally can do,” Reynolds said.

Chairwoman of the Academic Excellence Committee Hannah Miller asked the senators if there are any resolutions they want to work on in the next month.

Edwards said she wants to get a feel for what is happening first before she starts taking on resolutions.

Reynolds wants to start coming up with sustainable acts on campus right away.

“I don’t think there’s a huge conversation or pressure on the administration to make these changes that are so desperately needed,” Reynolds said.

Secretary of Student Involvement Allan Millward asked the new senators if they are thinking of running for reelection in the fall.

Both Reynolds and Edwards said that they want to get a feel for what SGA is about but are leaning toward running for reelection in the fall.

Millward gave a reminder that Victor Talks will be held tomorrow, March 9 at 6 p.m. It will be held virtually through Zoom. For more information, visit SGA’s Twitter page.

President Lauren Goodwin finished up the meeting with a reminder to encourage people to apply to SGA.