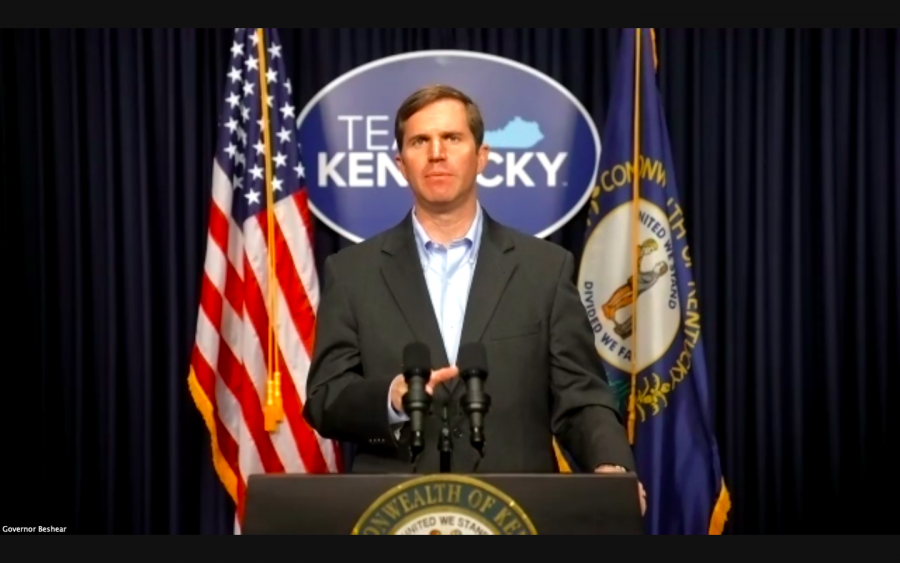 Governor Andy Beshear was a keynote speaker at Kentucky’s Rally for Higher Education.

The Rally for Higher Education took place last Friday. Guest speakers included Kentucky Governor Andy Beshear and Dr. Aaron Thompson, president of the Kentucky Council on Postsecondary Education. The rally was hosted virtually through Zoom by the Kentucky Board of Student Body Presidents and NKU SGA members attended the meeting.

Governor Beshear began the rally by talking about COVID-19.

“The light at the end of this dark tunnel is getting brighter by the minute … we are going to sprint out of this pandemic in 2021, but until everybody can be vaccinated, we need everyone to continue to be patient and vigilant,” Beshear said.

Beshear then talked about his value of education throughout his state.

“If you’ve heard me speak at all, you’ve probably heard me say that the importance of educators and education is at the core of my values… it’s how we begin the hard work to redress historic inequities. Education is central to how we build a better Kentucky that we all want, and it’s how we break cycles of poverty to give people that better tomorrow, and higher education is the key to Kentucky’s future to creating the jobs of the future and training our workforce to be ready,” Beshear said.

Beshear also talked about experiencing college in the midst of a pandemic and the sacrifices that college students make each day.

“While some of your college experience has certainly been impacted, you have been able to be a hero. Even at your age, I can’t say when I was 18 to 21 that I did something that saved people’s lives, but your sacrifice, be it last year when you went virtual for a period or avoiding many of the normal things you would do in college, your sacrifice has saved lives of people around you, and it means that you have put your neighbors, your friends, people you don’t even know ahead of what you might want personally in a regular year that special is really special,” Beshear said.

Beshear believes that every Kentuckian should have the opportunity at higher education and is trying to make sure of it with a budget he presented to the General Assembly in January.

“I want to be clear. I believe that every child in Kentucky should be able to go to college, and the governor, nor the General Assembly should tell them what they should study. If we truly want to be competitive with other states, we need to stop the rhetoric that pushes people away and recognize that we want every Kentuckian to get either a four year degree, a two year degree or a skilled certificate and everybody ought to be on that path,” Beshear said.

Beshear said that an additional $17 million in funding for post secondary institutions was pledged which is a 2% increase in general fund investment. This is something Kentucky has not seen in a long time. $50 million was also proposed for asset preservation projects and nearly $20 million in additional funding to help campuses cover pension obligations.

Beshear talked about the Better Kentucky Promise, which is a “program that broadens the Work Ready Scholarship, creates new opportunities and provides the last dollar necessary for more than 6,300 Kentuckians to complete associate’s degrees or secure certificates,” according to his budget address.

“Overall the [Work Ready] scholarship has served 5,600 students and provided more than $16 million in scholarship for adult learners around the state just since 2017,” Beshear said.

Beshear stated that there are over $600 million extra available funds for Kentuckians and $2 billion will be coming from the federal government shortly to provide COVID-19 assistance.

“Now we have had budget cuts, substantial budget cuts over the last many years. Matter of fact, we’ve reduced problem state appropriations about $3,000 per student over that many years [since he started his position as President of the Kentucky Council on Postsecondary Education], and our tuition has risen significantly but not enough to cover that. So what has happened is that we’ve shifted a lot of that balance to families and students that we have to focus on,” Thompson said.

State appropriations are primarily used to fund public colleges and universities. The funds are set aside for things such as financial aid at colleges. However, the variation in state spending comes from these three factors, according to a report from the American Academy of Arts and Sciences:

“I’m proud to say that in the years I’ve been in this position, we’ve had the lowest tuition increase in the history of the council. We had a 7% increase last year, we’ve increased more financial aid… we’ve also provided more financial literacy that matter for students to know exactly how they can be advocates, as well as good stewards of the dollars that they get,” Thompson said.

Thompson’s second priority within his position was to start focusing on how to get more credentials that prioritize higher education within Kentucky.

“Not leaving anybody behind based on geography, based on income, based on race or gender, based on any demographic, based on age… this is the gap closing. When I talk about gaps, I’m not just talking about achievement gaps, I’m talking about opportunity gaps, because it’s important that we understand that many people may not feel they have an opportunity, even though we may do, so you all represent a wide variety of folk,” Thompson said.

Thompson grew up in Clay County, Kentucky as a member of a lower-class household where he was a first-generation high school graduate and college graduate.

Thompson also talked about the hard conversations that must take place to ensure Kentucky is a better place for people to receive higher education.

“We need to talk about making college more affordable, we need to improve access and success for all, no matter who they are or where they’re coming from. We need to strengthen the connections between us, our jobs (which are you all by the way) and we need to promote the value of higher education,” Thompson said.

The rally concluded after the breakout rooms ended with a brief thanks to all that attended.