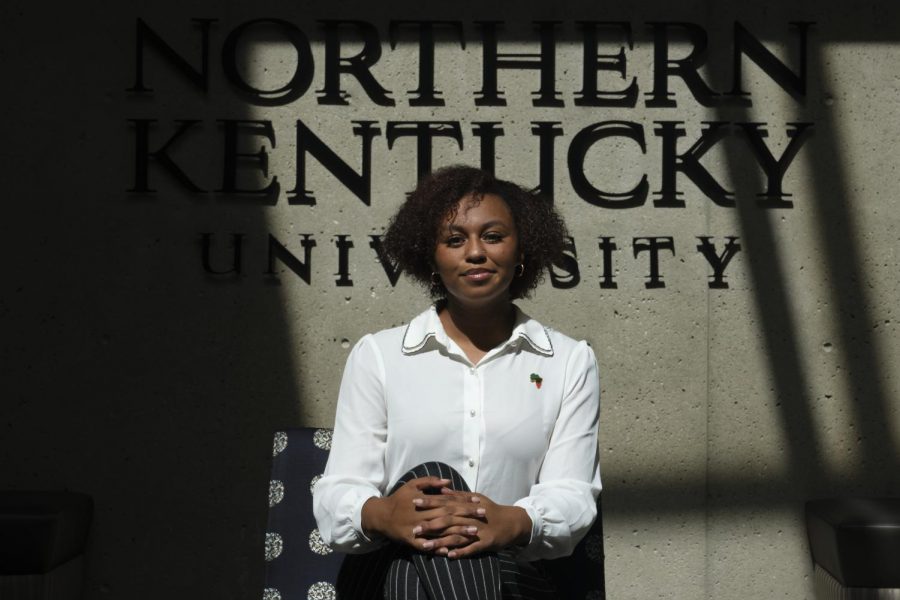 KM: “I voted the way that I did because I don’t think that President Goodwin has fulfilled her campaign promises. And I believe that when you do not do the things that you say that you’re going to do, you are unfit to be a leader, you are unfit to run office, and she did break the Constitution, although they ruled that she did not. And I am a firm believer in the Constitution, whether it’s federal government or student government, and I believe that when you break those rules that were set in place, you do not deserve to be in office, you do not deserve to lead anyone.”

TN: Why do you think impeachment was brought up?

KM: “I believe that impeachment was brought up because again, she has failed to fulfill her promises, she has failed to uphold the Constitution and accurately represent the student body within our Senate, and within her leadership role.”

TN: Going forward, what is your plan as a Senator?

KM: “I plan to try and make campus as accessible and safe for minorities as I possibly can. I want to contribute to making places like student government, and like the Democratic Socialists of NKU and things like that, I want to make those places more accessible to minorities and I want us to be able to become involved and not feel like we don’t belong in these spaces because it’s very easy for us to feel out of place because we don’t have any safe spaces here. We only have basically the Greek office and the Office of African American Student Initiatives and those are safe places, and it should not be that way. So I’m planning to hopefully get some guidelines for hate speech on campus, just so we can have something as a blueprint to say, ‘Hey this is not okay, you cannot say this because it does infringe on other people’s rights and their safety’ and things like that. So I, as a senator, just want to make campus safer for minorities.”

TN: How do you feel that this was a heavily attended SGA meeting by the student body?

TN: How do you feel about the multiple students who “testified” that they felt unsafe on campus and how are you representing those students?

TN: What factors played into your decision of impeachment?

KM: “Well for one, her breaking our constitution and our bylaws, that was one of the factors. But my main driving force was the underrepresentation in our Senate. And in our eboard and things like that, like yes we do have representatives of color who do sit in our eboard but we don’t have any black people who sit on our board. And so, I believe that she has not done her job. She said transparency and action. Where’s the transparency? Then she said every single senator, like every single person of color who has applied to be a Senator, she let them in. And that makes me feel as though we are nothing but a diversity quota. We are affirmative action. So I believe that she is not for the betterment of the minority community on our campus and that was my main driving force. Oh, and environmental issues; I myself am an environmentalist, and her attempts at the removal of the geese on our campus will not only do great ecological damage but we are in the middle of a current climate crisis. And if that does not tell her, enough about the removal of the geese on our campus. And I don’t know what will.”

TN: What are your thoughts on the hate accounts popping up on Twitter?

KM: “I am a personal victim of the hate accounts. They, found my Twitter. They found my Twitter and they pulled up a couple of my tweets and things like that. And I think that it is disgusting. I think that it is very cowardly to hide behind a fake page. I think that if you have to harass people to get your point across, and you have to talk very derogatorily about people and you have to drag multiple communities to get your point across, then I think that you are disgusting, and you have no business in any leadership roles… So I thought that it was very disgusting and I thought it was very cowardly and if you have anything that you need to say to somebody, you need to say it to their face. I think that the way that they attacked the LGBTQ community was, oh goodness, that was beyond me. That was really disgusting and that was definitely uncalled for. And I think that it needs to be addressed immediately. We need to find out who did this, and we need to find a way to track these people down and reprimand them and there needs to be consequences for this, because this was harassment not only just to me and to other senators, but to an entire community of people.”

TN: Do you denounce this harassment and bullying?

KM: “I definitely do; I don’t believe in bullying at all. I think that you are a coward if you have to bully somebody. I believe in facing problems head on. And this is not a white versus black issue. This is an us versus white supremacy issue. I think that whoever did it should come forward and say that they did it.”

TN: What are your thoughts on how the impeachment was conducted/handled? Do you think it was a properly held trial?

KM: “I do not think that the impeachment trial was properly held. I believe that we should have suspended Robert’s Rules of Orders from the beginning. We knew coming in that she [Goodwin] was going to try and shut us down. And that is exactly what she did. So we had to suspend the rules and I believe that when we have to do that because our leader does not want to hear what we have to say, we have an issue. We have a major issue, because she is supposed to be listening to us and representing us. And she tried to shut us down. Her own Chief Justice tried to shut us down. I believe that we definitely could have done things differently. Yes, I believe that we should have allowed all of the student body in the room and yes I know and I understand COVID-19 measures and things like that. But this was a major issue that needed to be addressed. And it still needs to be addressed.”

TN: What is your experience with learning about the impeachment process? Were you properly taught the correct procedures for when something like this happens?

KM: “When I was appointed to SGA and things like that, they emailed out the Constitution and the bylaws and they said, ‘Read this,’ and that was it. So when we were trying to write up these articles of impeachment and things like that we had to teach ourselves. We had to read it and dissect it all on our own. So, no, we were not properly taught by our Judicial Council how to handle things, which is a failure on their part.”

TN: Do you think it’s a conflict of interest that President Goodwin is dating Chief Justice Cleary?

KM: “I do think that it is a conflict of interest that she is dating Chief Justice Cleary. Not only because it allows him to protect her, it allows justice not to be served. I know that I would not impeach my girlfriend. Would you? I would not go against my significant other, no matter if they’re in the wrong or if they’re right because that’s my person, so I definitely do think that it is a conflict of interest. If there is a conflict of interest, such as a personal romantic relationship, they should have to take a step back and allow proceedings to go as they should, because we have other justices who could have gotten up and spoke and read the Constitution.”