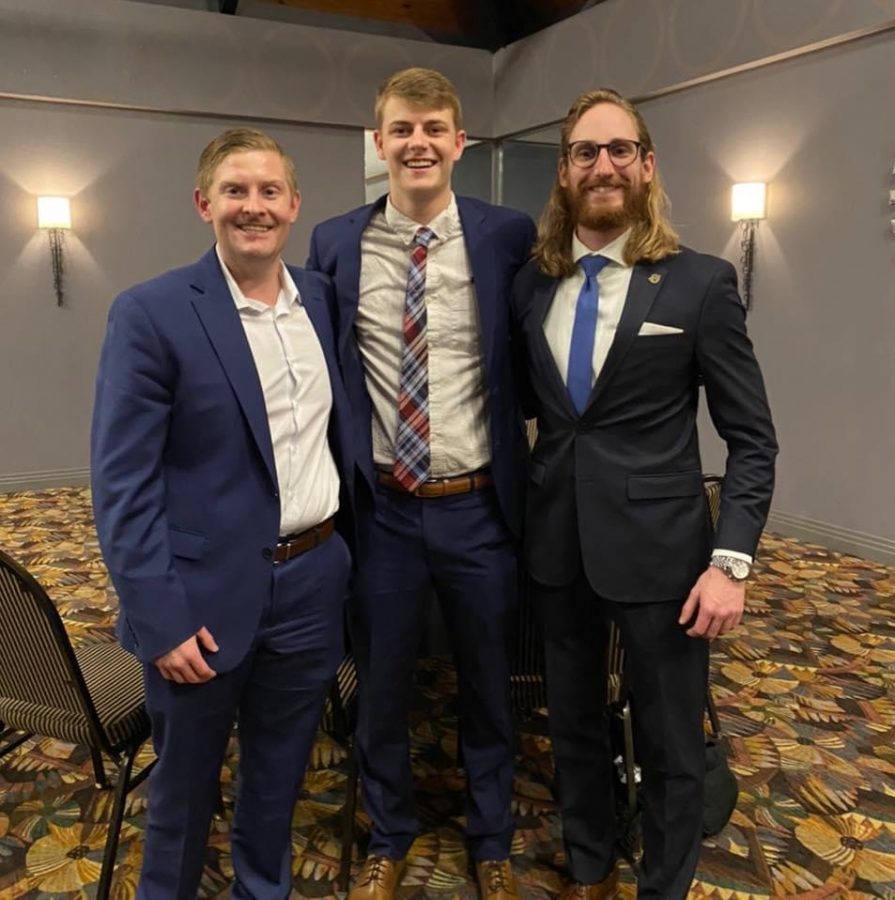 Adam Uhlenbrock: “Last Monday with the impeachment and everything came into it like, I’m sure like a lot of other senators, besides the ones that were like actually forming the impeachment articles and whatnot, not really knowing much about it, like I found out on the spot. Basically, when they put it forth and they read everything out, It’s kind of like okay, and with the impeachment articles themselves, starting with the first point that they brought up, having people in the office, it’s not a good look on Lauren and E-board to allow that since she made it an executive order, but didn’t I really feel like that was an impeachable offense even if she did violate her, whatever you call it, but that’s my opinion on the first one. Then the second one, with the not letting the two senators in. It’s kind of weird so when they like were discussing it, the impeachment side, said that it was constitutionally unlawful for her to do so with the 25 and we had 21, they already let four in. Then the other side that didn’t want her impeached sort of said, ‘Well, no, it’s actually not unconstitutional.’ So I think like me and a whole bunch of other senators especially the ones that voted not to impeach her were sort of confused on whether or not it was constitutional or not, it probably would have been easier to make the decision if we had those bylaws like right in front of us. But, again, like I didn’t, I couldn’t really understand which side was right with the constitution part. So that’s really one of the main reasons why I voted the way I did.”

TN: So why do you think, personally, the impeachment was brought up?

AU: “I think it probably happened because there’s probably some ill feelings toward Lauren in the minority-based population on campus for her non-involvement in their activities and stuff that they do like not supporting that as much. I think that’s probably one of the main reasons. I think the other reason is probably the two senators who weren’t allowed into SGA become senators probably reached out and had a part of reinforcing the impeachment. I think that’s probably why.”

TN: What are your plans going forward as a senator?

AU: “Yes, as a senator it’s hard, I was in the academic excellence committee and I’m not exactly academically excellent so that was hard for me to really do anything past anything, but I requested to be switched over, and now I’m in campus improvements, I believe it is. So one of the things that it’s not the thing I want to do is not even really involved with campus improvement it’s more along the lines of recruitment and getting more people to come to NKU, especially in the area. So what I’m planning on trying to do is work out some kind of way to send out a mass email to all high schools in the area and in Kentucky, and just get feedback on what they look for in a college campus, and why they would choose one college over the other, if that makes sense. Get feedback on what NKU can do better or add to the campus to increase the recruitment numbers.”

TN: Some of the minority students that came to the meeting said they weren’t feeling safe on campus or represented. How do you plan on helping those students representing them?

AU: “Yeah, so going off of that as well the students that came in to give their speeches and their testimonies, I didn’t really want to like I felt like afterwards it kind of seemed like I took away their voices or made their testimonies not heard. I just want to be clear that I wasn’t really voting on what they said it was more along the lines of what was in the impeachment articles, and I wasn’t really voting on what was said afterwards, but it definitely is discouraging hearing all those voices and everything that they said, but I have been a pretty big advocate. I’m in GUIDE [NKU] and also went to the rally against the racism on campus so I’ve been trying to do my part as an NKU student to be involved with the minority groups and everything like that and I’m just going to continue to try to fight for their rights and equality on campus.”

TN: What are your thoughts about the hate accounts just popping up on social media and what they’re posting?

AU: “Definitely saw a couple of them. Some of them, in my personal opinion, I wouldn’t say most of stuff they’re tweeting was hate it was more just a rebuttal to what the people on the impeachment side were saying. The hate stuff that they were saying, it is sh*tty that they’re doing that, but I mean you can’t really control what a person says on social media. I don’t really have a strong opinion on that. It’s a sh*tty thing that happened I mean, there’s people making fake accounts and talking sh*t all the time on Twitter so I mean, it sucks that it’s happened at NKU but I’m sure it’s happening everywhere else too.”

TN: Do you think the meeting was properly held? How do you feel about how it played out?

AU: “It’s probably the first one anybody in SGA is ever like gone through that. So I feel like it was definitely new to everyone involved. So there probably wasn’t proper guidelines that they knew that we’re going to be set up. I think it was poorly set up on both sides, the impeachment and the non-impeachment side, for their arguments. I don’t know, I think it was, I basically just think it was poorly set up I think there was definitely things that they could have done better like if the impeachment side were to print out the constitution and physically show every senator which bylaws were broken. And then, if they did that, and it was true then the argument against that wouldn’t really be valid and they wouldn’t really be able to say anything so I talked to some of the people that were involved in the impeachment side, and they kind of agree with me like it was kind of rushed and they just kind of wanted to, they definitely said they would have done it differently next time.”

TN: How informed are you on the SGA impeachment process? Is that something you’ve been taught?

AU: “The impeachment process, specifically I would probably say not very well informed at all. I mean, I never really expected to have to be part of like a trial like that. I’m sure a lot of other senators probably weren’t either so I would say very minimum.”

TN: Do you personally think that there is a conflict of interest between President Goodwin and Chief Justice Cleary dating?

AU: “Definitely could be, I know both of them, not super well, but I mean through SGA. I think they’re good people I don’t have any problems with them. It definitely is a sh*tty spot that the person in charge of judicial council is the boyfriend to the president so I can definitely see where conflict of interest can be assumed and also like possibly like be there. Yeah, I mean, it’s definitely a bad position for the impeachment side to have to deal with that, but like the anti-impeachment people, said there was other members on the board that they could have gone through and I don’t know how it would have played out if they would have went to them. If TJ would have told him like like no, we can’t really do that or not I mean, we really won’t ever know.”