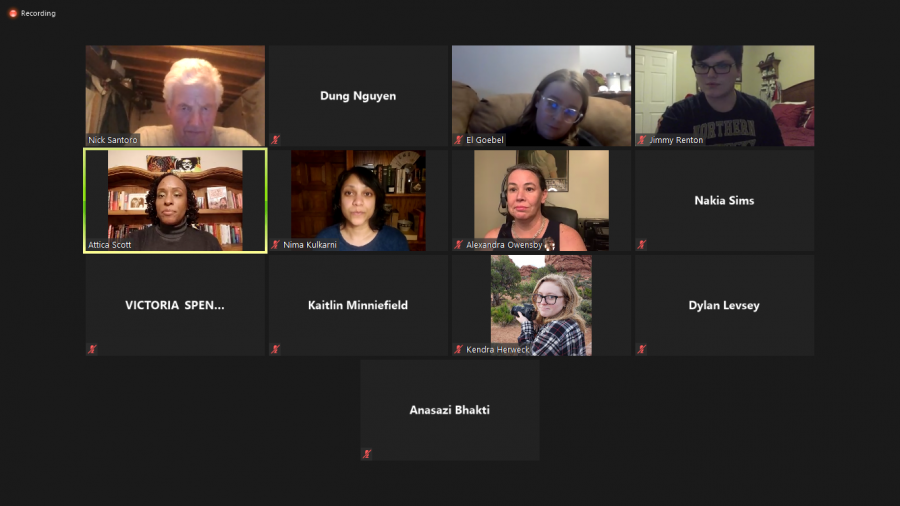 “I support the Green New Deal because it’s about sustaining families. It’s about creating jobs, it’s about cleaning up toxic chemicals in the neighborhoods,” said Representative Scott at the event.

She pointed to the chemical pollution in the west end of Louisville, Kentucky, which has a predominantly Black population. According to Rep. Scott, the environmental pollution by chemical companies in this area makes it difficult for residents to breathe and increases the risks of asthma in children. She believed that the environment and socioeconomic issues are inextricably linked.

“I’m not here to stand for corporations. I’m here for the people of Kentucky,” she said. “I know that we have to hold our corporations accountable, including those in our own backyard.”

Responding to a question about the lack of policies that hold corporations accountable, Rep. Scott referred to politicians’ fear that stricter regulation would drive businesses away. “We can’t allow corporations to try to make fear drive our political decisions, we have to drive our decisions based on what’s best for our people,” she said.

Representative Kulkarni agreed with this sentiment. “Corporations aren’t people no matter what the Supreme Court says. People are people. People are the economy,” she said. “If we frame it the right way, we can get things done.”

Rep. Kulkarni pointed out that most people do not care about corporate tax cuts or climate change. “All people really care about is food on the table, a roof over their heads, educating their kids, getting to and from work safely, not being afraid of being shot in the streets,” she said.

Dr. Owensby added that farmers in rural Kentucky do not want to talk about climate change and that the agricultural aspect of the economy makes people resistant to the Green New Deal. For example, they believe climate policies would get rid of their cattle.

“A lot of people just don’t know what the Green New Deal is,” said James Renton, president of NKY Sunrise and a music education major at Northern Kentucky University. “They’ve heard of it and they know it’s about climate change, but they don’t know much else about it. They don’t know the people who are actually advocating for it and what they’re trying to do on local, state and federal levels.”

When she was running to represent Kentucky’s 4th Congressional District, Dr. Owensby said that many people she talked to did not know who their district representatives were.

“I think we have so much work to do as Kentuckians to make sure people are really well-educated as to what’s going on in their district, how it affects them, who their representative is and how they’re voting,” she said.

Dr. Owensby believed that with telehealth becoming normalized over the COVID-19 pandemic and with people commuting less, it would benefit both the environment and people, especially women who have lost their jobs more than men.

“If we want to make women truly equal in the workforce, we have to acknowledge that they are primary caretakers the majority of the time,” Dr. Owensby said. “And how do we make that work for them? One of the ways is working from home, and making it not just acceptable but not looked down on.”

Rep. Kulkarni said that the more the environment is harnessed in a sustainable way, the better it is for everybody and it is cheaper in the long run.

The town hall meeting also discussed urban housing development and gentrification, the psychological impacts of the pandemic on healthcare providers, raising the minimum wage to a living wage and pay equity for marginalized groups.

“We can build our collective power when we work together on all of these issues,” said Rep. Scott. “And not to think that because we’re advocating for raising the minimum wage, we’re not advocating for pay equity. We do both. We do it all.”

The town hall was the first major event by NKY Sunrise, which was approved as a university organization in October and became an official Sunrise hub this month. The event was originally planned for November but was delayed because of COVID-19. According to Renton, it was meant to serve as an educational experience for everyone from any political party.

“What we want to do is really educate people about these progressive policies that have been demonized by the right just because the people who proposed them are identified as socialists,” said Renton about the purpose of the town hall.

Renton said that when it comes to the Green New Deal, Northern Kentucky and Kentucky in general, as well as Appalachia, are going to be heavily affected. The Green New Deal entails coming out of fossil fuels and it would impact the job industry in Appalachia, which is heavily dependent on coal.

“But Appalachia is also rich in so many things that can give us renewable energy,” said Renton. “You’re high up in the mountains, you’re going to get a lot of wind. When you think about all the rivers and streams and creeks we have, that’s perfect for hydro-energy. That’s going to bring more jobs than what the fossil fuel industry is offering right now.”

Renton and other event planners at NKY Sunrise hoped that town hall attendees would learn something about the Green New Deal and learn whether they truly believe in its ideals. “To get change done, you need to get people who are passionate,” he said. “To figure out if they have passion, they have to learn first.”

Dr. Owensby said that there is a renewed interest in politics and policies in recent years, citing knowledge of insurrection as an example.

“People see where things have gone terribly wrong with their world: the lack of pandemic response, the lack of addressing climate change, the lack of actually addressing gun violence,” she said. “Where I think change happens is watching injustices in the world and the people that come out and go, ‘We’re not going to let this ever happen again.’”

Rep. Kulkarni said that election is the surest way to change. “At this point we know [corporations] are not gonna regulate themselves, they’re not gonna change their minds. It doesn’t matter what we say or how much we protest,” she said. “We’ve just got to get the right people in office, and that is the only way we can change those policies.”