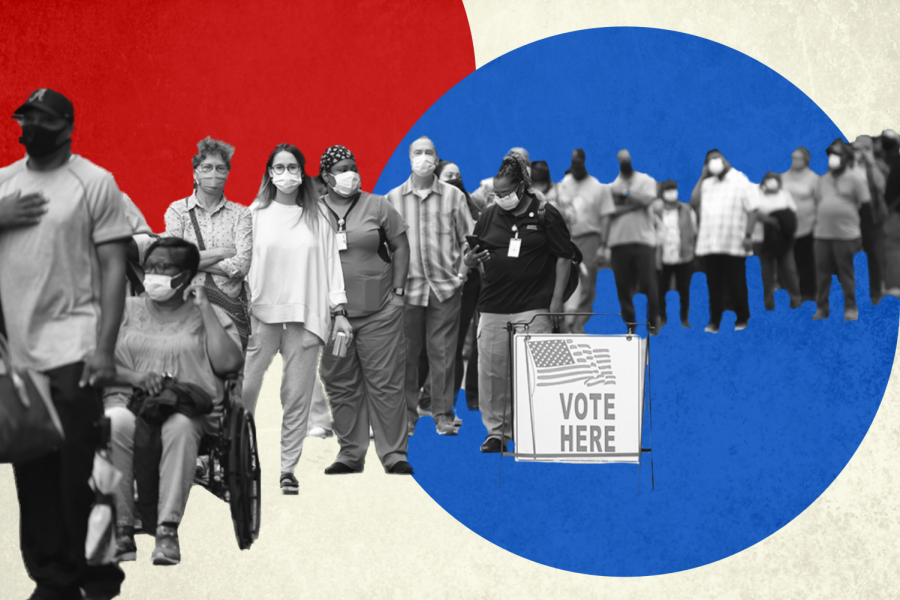 Voters in Georgia line up to vote on November 3. (Provided by AP News)

With no surprise, 2020 can add another record breaking item to its list.  According to the U.S. Elections Project, there have been over 150 million votes counted. This was the highest voter turnout in the United States for a presidential race in over a century and would break the record set in 2008 by former President Barack Obama.

Dr. Ryan Salzman is a political science professor at NKU. He said there was a lot of energy around the election that drove people to the polls.

“People have very strong opinions about President Trump in one way or another, and I think that clearly drove turnout in the polls,” Salzman said.

With many key issues in play and most people’s strong opinions on the candidates, Salzman was not surprised to see an energized country that was ready to vote in this election.

“I wasn’t surprised that voting increased as much as it did. We can look at 2018 and that was also a very high voter turnout. Even here in the Commonwealth, we had high voter turnout in the 2019 statewide and gubernatorial election. So I think this just continued to trend after what was kind of relatively down period from 2012 and 2016,” Salzman said.

With such a high voter turnout this year, many are wondering whether it will last in the future. Dr. Michael Baranowski is a political science professor at NKU, and he said he is not so sure America will see this type of turnout in the future.

“I don’t really think that’s sustainable. I would be really surprised to see those sort of numbers—at least at the level we’ve seen it in 2020—so I expect it to go down a little bit,” Baranowski said.

There are several things that drive people to the polls especially when voters feel like key issues are on the table, according to Baranowski.

“We tend to see turnout numbers in general go up when people feel a lot more is at stake. Whether you love him or hate him, it’s hard to not look at Donald Trump, as a candidate or as a president, [and] not feel like there’s a lot at stake one way or the other,” Baranowski said.

At this time exact numbers are unknown. It is expected that 18 – 29 year olds showed up to the polls in large amounts.

Mark Neikirk is the executive director of NKU’s Scripps Howard Center for Civic Engagement. He said they worked hard this year to try to get more NKU students registered and voting, especially in this year’s presidential election. As a part of their efforts they hosted campus collaborations such as zoom events, social media voting campaigns, external partnerships, and more to help get students out to the polls.

Neikirk said that Scripps does not know how many NKU students voted yet, but they do think student voters turned out in higher numbers.

“I’ve seen the national results that really do look like record numbers. It will be a number of months before we know how NKU students voted. I’m certainly optimistic that we have higher participation than we have in past years,” Neikirk said.

As votes continue to be certified across the U.S., it is expected that more data will show exactly how many Americans and NKU students specifically voted in this year’s heated election.