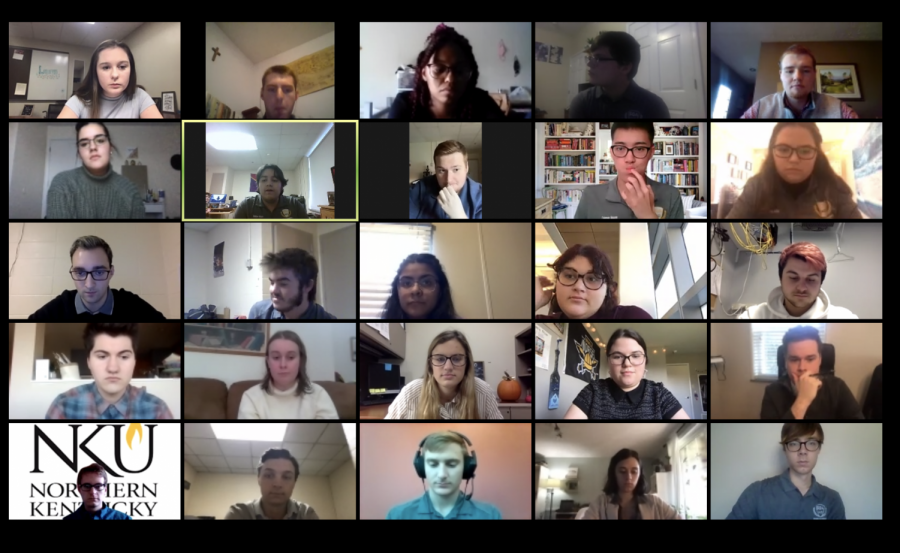 SGA discussed the first reading of a resolution that would protect positions at Norse Violence Prevention Center and gave COVID-19 updates in its first entirely online meeting of the semester. Vice President Mia Derks’ political endorsement via social media was also called into question by a member of the public.

Steely Library is still open and in-person office hours across the campus are generally still available at certain times. In addition, some in-person classes are still meeting on campus. Aikman recommended that students check NKU’s website prior to their trip to campus to ensure the availability of on-campus services.

Starbucks and the Travel Wagon are still open in the Student Union; Sbarro’s is closed at this time. Dining services at Norse Commons will maintain regular dining hours throughout this week. These conditions will be re-evaluated each Thursday by the COVID-19 Preparedness Team, according to Aikman.

If the current circumstances are modified, the changes will take into effect the Monday of that following week, Aikman said.

At this time, residential students are not impacted by the current circumstances, Dean of Students Arnie Slaughter said.

“For housing, we’re in a pretty good situation in terms of already being in a reduced occupancy model,” Slaughter said.

While current accommodations may change in the future, residential students that depend on campus housing will not be displaced, according to Slaughter.

“We will still make sure that the students that need student housing, that don’t have a place, will not be displaced and will have a place to stay,” Arnie Slaughter said.

“What would you say to the students—many of whom are in the LGBTQ+ community, women and minorities—who feel misrepresented by your VP’s open endorsement of Justice Barrett given her staunchly anti-immigrant and homophobic stances in the recent and past years?” Simpson asked Goodwin.

Justice Barrett was recently confirmed to the U.S. Supreme Court by the U.S. Senate to fill the vacancy left by the late Ruth Bader Ginsberg.

According to coverage by the Associated Press, “Monday’s 52-48 vote was the closest high court confirmation ever to a presidential election, and the first in modern times with no support from the minority party.”

In addition to the partisan circumstances around her confirmation, Barrett is also considered controversial due to her conservative-leaning judicial history, including her pro-life stances as a judge in Indiana’s court system.

“What I will say is that my executive board’s and my entire body’s personal opinions are their own and they’re entitled to those, as is everyone else,” Goodwin responded. “She made a tweet, and that is that.”

Goodwin also said that herself and SGA Secretary of Public Relations Emily Miller are the only members authorized to make official stances on SGA’s beliefs and support via social media.

Chairman Ronald Delgado and senator Karla Arango conducted the first reading of the new resolution that would protect a select amount of paid positions at Norse Violence Prevention (NVP) from possible termination.

In NVP, which was established in 2014 through grant funding, the director, advocate and project coordinator are paid positions. The director is the only position that is paid through institutional funding from NKU while the advocate and project coordinator rely on “non-continuous grants from the Department of Justice,” according to the resolution.

The grants that have paid for these positions will expire in September 2021 and NVP is not guaranteed to secure additional grant funding by that time, according to Arango. Without outside funding, advocate and project coordinator—both of which are post-graduate positions—will no longer be paid and are subject to termination.

According to the resolution, the securement of institutional funding for these positions will allow NVP to continue providing advocacy training and programming at the same or increased rate.

At the conclusion of the formal reading, Arango and Delgado asked the SGA body for any questions or critiques to make the resolution stronger.

Senator Katherine Carter suggested to include rough estimates of how much it would cost the administration if the two positions became institutionally funded.

Arango and Delgado plan to invite NVP director Kendra Massey to attend next week’s meeting to answer any further questions during the resolution’s second reading.