What students should watch for in the first presidential debate 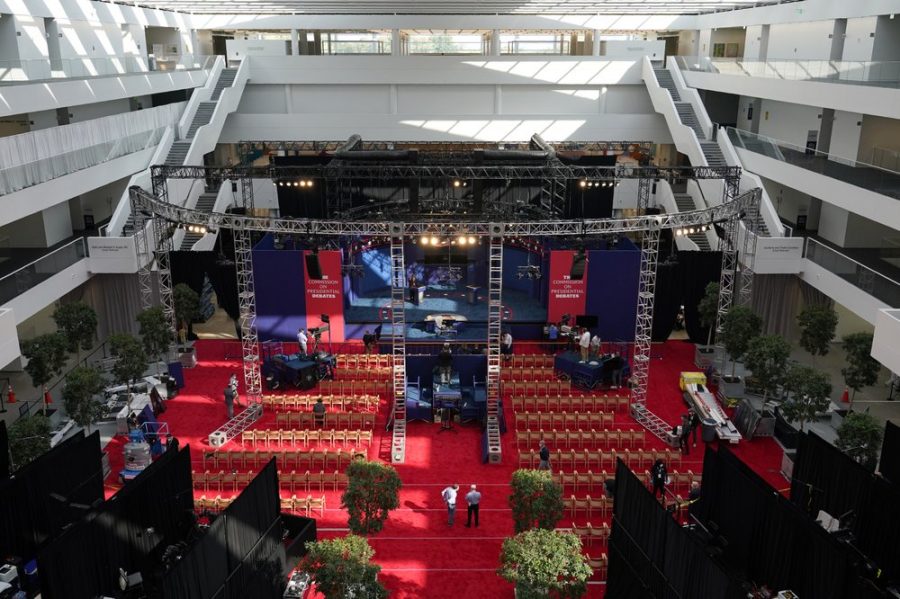 Preparations take place for the first Presidential debate in the Sheila and Eric Samson Pavilion, Monday, Sept. 28, 2020, in Cleveland.

Chris Wallace, Fox News Sunday host, will be the moderator for tonight’s debate. Wallace was selected by the Commission on Presidential Debates, a non-partisan organization that chooses all of the debate moderators.

Wallace is no stranger to the debate stage. He was also a commentator in the 2016 presidential election between Donald Trump and Hillary Clinton.

According to a news release by the commission of presidential debates, the topics Wallace will focus on are Trump and Biden’s records, the Supreme Court, COVID-19, the economy, race and violence in our cities, and the integrity of the election.

He said there are some key items students should look for in tonight’s debate.

Weiss said  you should ask yourself if there are good reasons to switch from one candidate to the other. Are there policies or other issues that you think should be changed or that you do not agree with?

It is also important to focus on the candidates plans and policy. You should look to see who you think would best lead the nation.

“Try to have the moderator sink into the background. Look at this as two competing systems—the system we had and the system that’s being proposed as a replacement,” Weiss said.

According to Weiss, students should listen closely and critically to both politicians’ answers.

“Look for a detailed reasoned analytical understanding of the issues,” Weiss said.

Demeanor and body language is also just as crucial as the words spoken, according to Weiss.

“Who is really keeping it all together, keeping on their points, and expressing in a way that is very understandable and clear?” Weiss said.

While Biden and Trump will touch on several points, it’s important that students do not take all of their words as facts. Factual evidence is important because politicians can take statistics and information out of context. This took place in the 2016 presidential debates.

According to coverage by USA Today, there were several instances of misleading information from both then-nominees Donald Trump and Hillary Clinton.

“This will be a big deal in this debate,” Weiss said.

Students should also pay attention to how the candidates respond to each other. The candidates will try to refute each other as much as possible, Weiss said.

“If Trump is really zinging Biden on something he says or does and vice versa that’s going to be the highlights of the debate,” Weiss said.

“Trump has something going for him, he has this thing where he is ultra-confident. Biden wasn’t a great debater and he’s not the debater he used to be. He could be the calmer of the two.” Weiss said.