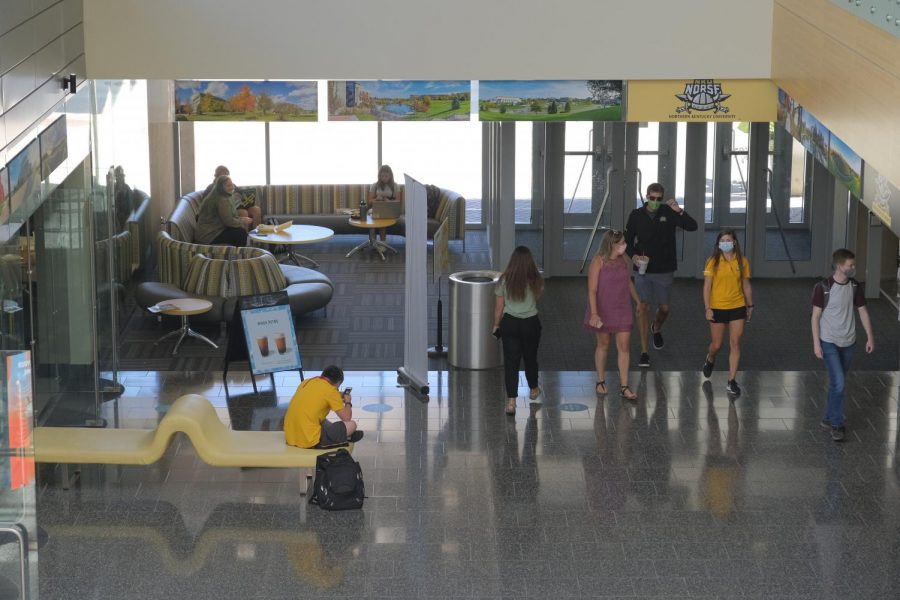 Students entering and exiting the SU on Wednesday.

SGA and faculty administrators discussed what spring semester will look like and how to submit name suggestions for the new residence hall at this afternoon’s meeting.

The administration is currently investigating five to six options for what the spring semester will look like at NKU. Vaidya said he hopes to have a finalized schedule for spring semester by the end of this month.

“We’re going to be taking input from our students as well but also taking into consideration what the environment will be like,” Vaidya said. “I wish I could say that things are absolutely improving and we will be back to business as usual. That’s going to be very unlikely. We’re looking at a variety of possibilities with respect to the spring schedule.”

Senator Adam Uhlenbrock referenced University of Kentucky’s decision to eliminate spring break and lengthen winter break, and he asked if that was a possibility for NKU. Vaidya confirmed that is one possibility the administration is looking into out of the “five to six” options currently under review.

Vaidya also announced administrators have been informed by the state of Kentucky that NKU will experience an 8% reduction of resources.

“Eight percent translates into about $4.2 billion for NKU,” Vaidya said.

The administration expected a 5% reduction but the additional percentage increases the loss by $1.6 billion, according to Vaidya.

“We’re still sort of looking and being very careful with our financial position and situation,” Vaidya said. “COVID has created all kinds of challenges and expenses that we had sort of anticipated, but we’re not quite sure where those things are. We continue to monitor that very carefully.”

According to Vaidya, the administration will work to ensure that the faculty, staff and programs will not face an additional burden due to current financial circumstances.

“Barring anything major that comes out, we’re still hopeful that this will be something we can manage,” Vaidya said.

“NKU has a challenge because of the fact that our pension in the Commonwealth of Kentucky is severely underfunded. That’s a major issue,” Vaidya said.

A recommendation for how the university will handle the pension crisis will be brought before the Board of Regents during its November meeting, according to Vaidya. Additional updates will be forthcoming.

Finalist candidates for the next vice president for student affairs will be announced soon, Vaidya said. The finalists will take a virtual tour of the campus and have the opportunity to interact with SGA as well as the general student body.

During the meeting, Dean of Students Arnie Slaughter passed around a naming suggestion card to all attendees at the SGA meeting.

The card welcomes suggestions for a name related to a nearby area reference, person or people affiliated with Kentucky or NKU or a particular NKU reference. Students can also suggest a name that does not fall in those categories as long as they provide additional clarification of the name.

If anyone has a current suggestion, email Arnie Slaughter at slaughtera@nku.edu.