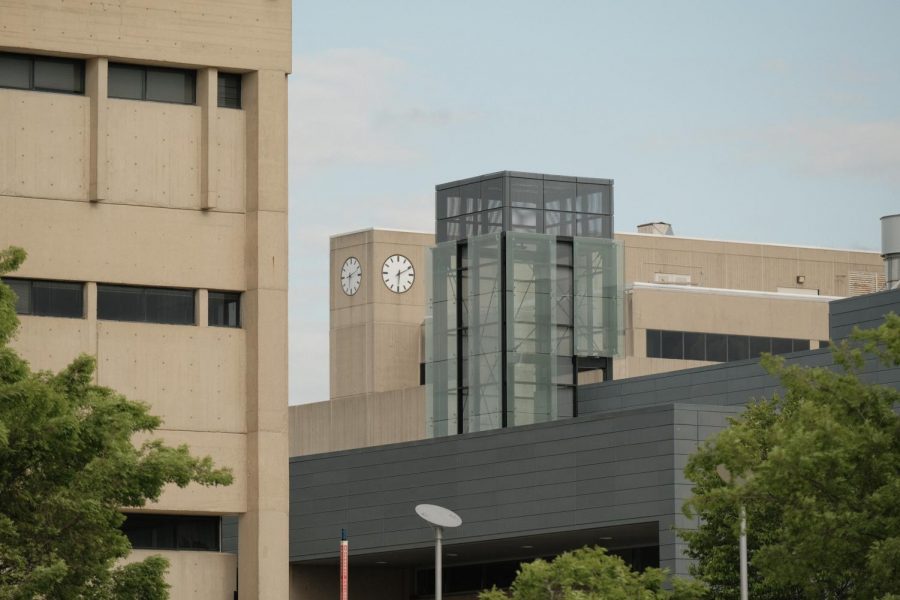 While the streets of Cincinnati’s downtown fill with the voices asking for a change in the systemic racism against Black people, NKU administration debates how they can help their Black students.

“It is in these challenging times that NKU must serve as a beacon of hope and set an example through our leadership,” President Ashish Vaiyda wrote in a statement to the community on June 1.

Vaidya said that it is critical to acknowledge the hurt and outrage yet focus on the core values of NKU as they work hard for a more equitable, inclusive and just society. One of the ways Vaidya has addressed this is the hiring of Darryl Peal as the Chief Diversity Equity and Inclusion Officer in January. In his position, Peal plans to help create an environment that’s healthy and safe for marginalized communities at the university.

Peal said his team received information from the Equity Academy about how those communities felt on NKU’s campus.

According to Peal, COVID-19 has created a disruption in how the team communicates.

“COVID-19 has really been a disrupter in a way that some things just have not had a chance to evolve and come to closure, and it’s even more difficult to have some conversations where you’re not present,” he said.

One of the objectives Peal plans to start on campus is a mentoring process for African American male students, who Peal discovered have a lower graduation rate. This program would plan to raise the graduation rate for this community.

The Academy also highlighted some positive aspects of the University’s approach to diversity on campus. He said NKU has improved the engagement and quality of campus experience for the LGBTQ+ students.

The spring semester, and also Peal’s career at NKU, began with an incident involving a student who experienced a racist encounter with their public speaking professor. According to Peal, this incident caused the University’s leadership to have serious conversations about who NKU wants to be. It also made the administration discuss how to respond and engage with the marginalized groups on campus during times of crisis.

“With every experience you have as an institution, you either use that as an opportunity to grow, or you put your head in the sand and I think we were very intentional about saying, ‘What do we need to do in the future? How do we get better?’” Peal said.

One key factor of an inclusive campus for any university is raising the representation within faculty and staff, Peal said, but it’s important to note that representation does not mean inclusion.

“Representation is important. Having black and brown faces and LGBT faces on the faculty and staff that’s important, but representation is not inclusion in my world,” Peal said. “Inclusion means shared power, which means that those same individuals are part of a decision making process. They’re engaged at the institution that they have a voice and making sure they have a voice.”

If the University is intentional about teaching the significance of cultural competency and inclusion, it can help students be more prepared to work in a “global village,” according to Peal.

“If our students come to Northern Kentucky University and leave the same person socially and culturally they were when they enrolled, then we did them a disservice,” Peal said.

Peal said there needs to be intention and the University needs to create those learning opportunities for people to engage with different cultures and ethnicities.

“We’re committed to getting this work done to get these diversity goals into success by design,” Peal said.

In the Campus Police Department, while they only have two black people on staff, Police Chief John Gaffin said he, along with his department, will spend the rest of their careers implementing the changes to come out of George Floyd’s death.

According to Gaffin, he challenged his officers to think about what they would’ve done had they been on the scene in Minneapolis. He also led a discussion about how their perspective is going to change based on what has been shown on the news and social media.

“It just shouldn’t happen and there’s no rhyme or reason. There’s no justification,” Gaffin said.

He also sent an email to the officers where he explained how he personally stood on the incident and “that we’re on the cusp of a lot of change here.”

He compared the relationship between police and the community to filling a bucket with water: Every positive interaction with someone adds water to the bucket.

“We’re not the only ones making withdrawals from that bucket. Somebody doesn’t have a good relationship with the police department where they come from, they show up on campus, they bring a lot of that with them,” Gaffin said.

Incidents like this completely empty the bucket and move relationships with police back to square one. Gaffin said they’re always working hard to make sure that they are building a positive and constructive relationship to serve everyone in the community.

Lieutenant Will Love said the number one thing he looks for when hiring a new police officer is that they fit the community and help the students, staff and faculty on campus stay safe and be successful.

Throughout the whole hiring process, Love looks at the applicant’s behavior, personality and character.

“I don’t care if you can flip off a building, [been an officer for] 20 years and can hit a penny with your pistol, that doesn’t matter to me,” Love said. “Because the number one thing is I want to make sure you’re a good fit for the community [and] you will help the students, staff and faculty on campus stay safe and be successful.”

At NKU, the community is patrolled by both the campus police department and Highland Heights police department. While Gaffin knows he cannot force any officers in the HHPD to attend training, he ensures that they get an invite to everything the NKUPD does.

When the HHPD does need to speak with a student, the NKUPD does not share any information with the external officer to ensure the student’s safety and privacy. Instead, the officer is escorted by a member of campus police to the student, and the campus officer stays for the duration of the conversation.

Every two years, campus officers are required to be trained in Constitutional Unbiased Policing, which was most recently completed in January 2020. The training’s goal is to ensure officers operate in a constitutional manner while also staying free of bias.

According to Love, if an officer is found to have a pattern of racially based interactions, they are placed under investigation by himself and the Chief’s advisory board. Members on this board include those from the Center for Student Inclusiveness, Athletics and the criminal justice department.

According to Gaffin, there are procedures that must be followed, but a formal complaint isn’t required if the team independently finds evidence that prove any questionable behavior. The consequence can range from verbal warning to termination.

However, much like other aspects of policing, Gaffin said, every case is unique. Terms like probable cause, reasonable doubt, or preponderance of the evidence are hard to define because of the need to apply to different cases. This is in place so officers treat every case as its own.

Gaffin and Love said they try their best to ensure the students, faculty and staff are safe and attended to. Love works to build relationships with students regardless of racial or international barriers while he patrols campus. He said he takes pride in being a mentor for African American students because he was once there himself, but he wants students to know he isn’t just serving the Black students.

Gaffin said he’s always felt a responsibility to change the bad perception and overcome the negative examples of officers. According to Gaffin, there is a picture that comes to his mind of a white officer with a dog barking at a black child during the Civil Rights Movement in the 1960s.

“I wasn’t there, I didn’t do that, it’s not my fault, but I am responsible. When you put on a uniform and you take an oath to serve and protect, you’re responsible for fixing that stuff,” Gaffin said.

“We all have to do our part, we have to play our role, and none of us individually have the answers or [are] gonna fix everything. But person by person, relationship by relationship, you can change people’s minds, and that’s the path out of this.”