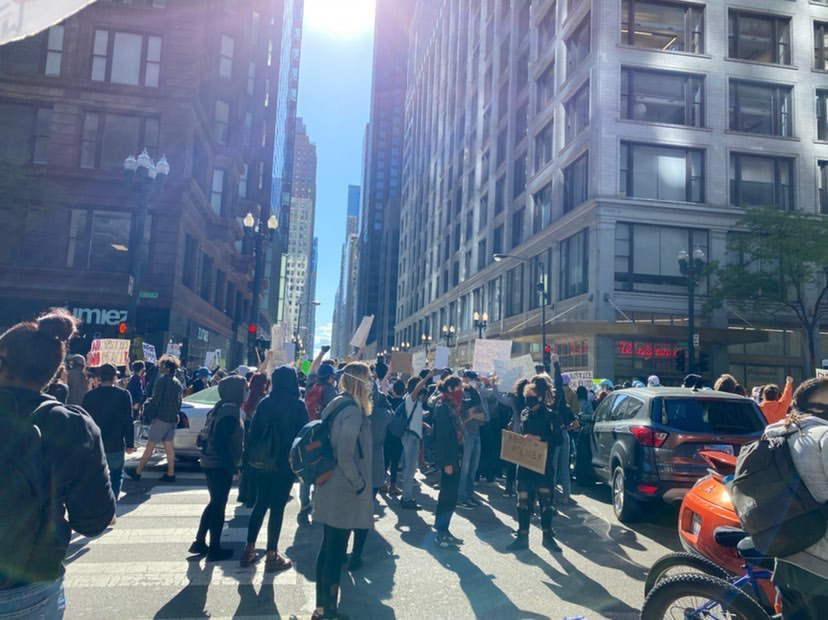 ‘I would take a bullet’: NKU students tell their protesting stories

Protestors were chanting in front of the Cincinnati Police Department’s headquarters. Police stood in a line, armed with riot gear. The protests had been peaceful all day until now, according to senior communication studies major Lexi Anderson.

Someone threw an empty water bottle.

Protestors were falling over because they couldn’t see. Family and friends were separated due to the crowds. People were splashing water, milk and other liquids in each other’s eyes to treat the tear gas burns. A child called out for their mother after getting maced in the face.

“Has anyone seen Carrie?” other protestors yelled into the crowd, trying to reunite the child with their mother.

Protestors were urging any children there to go home to avoid being injured.

A man’s eyes were swollen shut after being maced in the face. He could not see. At this point, the effects of tear gas and mace should have subsided, Anderson said, but he still could not see.

Anderson didn’t know what to do. Anderson and some of her friends splashed milk of magnesia—another liquid used to treat tear gas burns—in the man’s eyes and tried to assist him to safety.

The sky filled with smoke as more tear gas canisters cracked and exploded into the crowd. Rubber bullets hit protestors who were fleeing.

It was chaos, Anderson described.

Anderson protested in Cincinnati with her friends on May 30. She marched miles around the city with Black Americans and allies who were demanding police reform after the recent unjust deaths of George Floyd and Breonna Taylor.

Anderson said she has been learning and listening from her Black friends about the injustices they experience.

“I can’t imagine being in their shoes and I realized that I have a privilege as a white woman—that I get to do all these things so freely that they don’t get to because of the color of their skin,” Anderson said.

“I’ve tried to really, especially in the recent years, as I’ve gained more of that knowledge and understanding, just trying to apply that to my own life and trying to be more cognizant of how I approach situations and the things that I take for granted that I shouldn’t be taking for granted, and trying to speak up for those who can’t always speak up for themselves.”

Sophomore biological sciences major Kaitlin Minniefield attended various protests the weekend of May 29. She protested in her hometown of Hammond, Indiana—which is on the northwest border of Illinois. She protested in Michigan City, Indiana and Chicago, Illinois.

The whole experience was personal for her because she has family members who could potentially lose their lives to police brutality, she said.

“I have five African American brothers,” she said. “That is five chances that they can lose their life in the streets—just walking down the street, driving the car. I have three nephews who are all African American; that’s three more lives that can possibly be taken. My father is African American. That’s one more.”

Minniefield said these people close to her are the reason why she fights for the Black Lives Matter movement.

Overall, the protests Minniefield attended have been peaceful. She said the protests became violent when the police and National Guard intervened.

When protesting, Minniefield said, you have to be completely fearless and ready to potentially lose your life for the cause.

“I would stand in front of a police officer and I would take a bullet; I would get tased; I would get pepper sprayed just so my brother would not lose his life,” Minniefield said.

During one of the protests, Minniefield said she witnessed police brutality first-hand which is something she’s never seen before. A younger Black man was being pinned to the ground by police officers; they put their knees on his back, according to Minniefield.

The only thing Minniefield said she could do in that moment was pull out her phone and start recording.

“This needs to be documented. People need to see this. In my mind, it was ‘They cannot get away with this if they kill this boy,’” Minniefield said.

Eventually, the police stopped and arrested the man. Minniefield still doesn’t know what happened to him.

Minniefield said she’s tired of fighting and struggling. She’s tired of people not understanding why she’s protesting. However, despite her feeling overwhelmed and tired, she said the fight will continue.

“We have to keep going because if we stop here, nothing’s going to change. Our kids are going to be fighting for the exact same reason we are,” Minniefield said.

“My grandfather marched alongside Martin Luther King [Jr.] when he passed through Mississippi, and I’m out there 66 years later fighting for the exact same reason he did.”

Fifth year clinical social work major Trayonna Barnes went to a George Floyd protest June 1 in Cincinnati. She said she wanted to be with people who understood her rage and wouldn’t judge her for being angry.

The whole experience was chilling for her and she’s never experienced anything like it.

The most memorable moment from the protest, for her, was when the crowd pleaded with police officers to kneel in solidarity. She said none of the officers would kneel at first. After about 10 minutes of pleading from the protestors, one cop kneeled and yelled, ‘I am with you,’ Barnes said.

“I cried because it was such a powerful moment. He went against his line to do that. It felt like such a simple ask,” Barnes wrote in an Instagram message.

Barnes said she witnessed a heartbreaking moment where a Black 9-year-old girl passed out from overheating. She passed out right in front of a police officer and the officer didn’t even look at her; he just left her there.

Barnes and a few other people tried to get the girl some water.

A white man and woman stepped in to help the girl, Barnes said, and the woman yelled, “Do you see this? She’s a child. She’s here because her life is on the line.”

The man yelled, “When she falls, you help her.”

Barnes said the whole situation was heartbreaking as she originally watched the little girl protest, scream and cry before passing out.

Recently, Barnes said she’s felt angry, confused and fatigued. Her mother recently passed away, and she said she can’t be sad in public because she’s Black and doesn’t want to be perceived as a threat or having a bad attitude. She said it’s irritating that she can’t grieve without thinking about her race.

Minniefield said she encourages people to educate themselves on the Black Lives Matter movement and more. She said people who aren’t a part of the cause are turning a blind eye to the injustices.

“Black Lives Matter. It means that we’re all together. My life matters; Your life matters. We all matter. All of our lives matter. But right now, black lives and brown lives are being treated like they don’t. We have to fight this fight. We just have to,” Minniefield said.