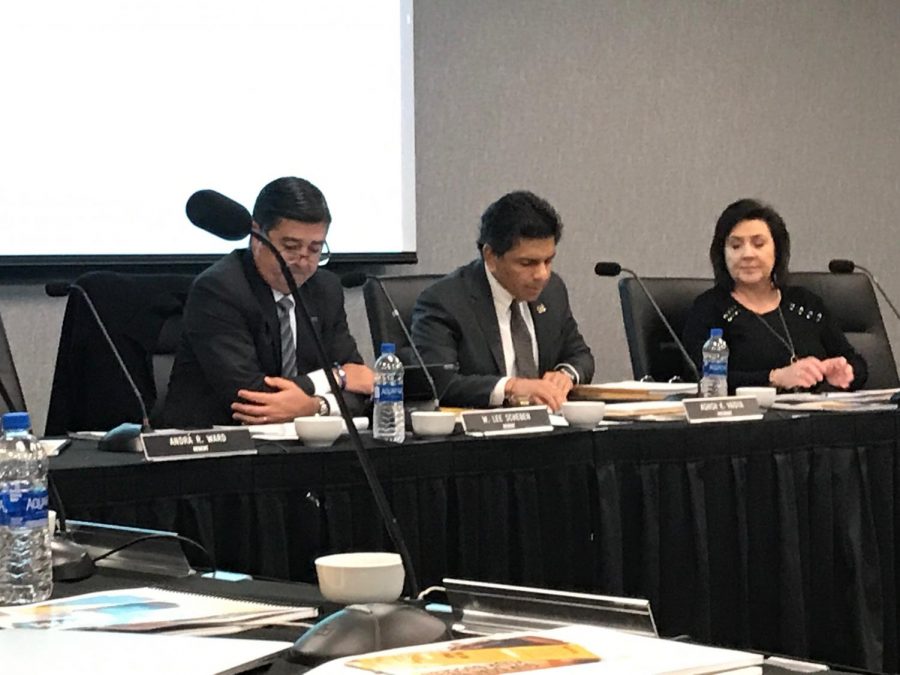 Regents Chair Lee Scheben and President Dr. Ashish Vaidya at a Board of Regents meeting Nov. 14, 2018.

During its May meeting, the Board of Regents discussed a research misconduct proposal from the Faculty Senate along with announcements of tuition freezes, new majors and programs and a new residence hall to begin construction.

Associate Professor of Chemistry John Farrar, Professor in Chase College of Law Ken Katkin, Professor of Biological Science Dr. Rick Boyce and others said they wish to revise the scientific and research misconduct policy in the faculty handbook. The policy currently reads as following:

“Research misconduct is the fabrication, falsification, or plagiarism in proposing, performing, or reviewing research or in reporting research results.

The changes that the Faculty Senate requested would alter the previously ruled statute of limitations and the definition of research misconduct. The latter’s definition they desired would, as Vice President for Legal Affairs & General Counsel Joan Gates said, be the “same definition as federal law but also includes ‘other serious deviations from those accepted practices.’”

Dr. Phil McCartney, who serves as faculty advocate in the faculty senate, said there is no statute of limitations in NKU’s ethics policy. He referenced the Code of Student Rights and Responsibilities, which reads, “The Honor Code is a commitment to the highest degree of ethical integrity in academic conduct a commitment that individually and collectively, the students of Northern Kentucky University, will not lie, cheat or plagiarize to gain an academic advantage over fellow students or avoid academic requirements.”

McCartney also stated the definition of plagiarism in both the graduate and undergraduate honor codes and said, “Does NKU hold students to a higher ethical standard than faculty are held to?”

“I believe the Senate’s proposal is in the long-term best interest of the University,” McCartney said.

Dr. Samantha Langley, Vice Provost of Graduate Research in Vice Provost for Graduate Education, Research and Outreach, said the definition of research misconduct is in line with the top 25 research institutions in the country. She is concerned with the current version because it “significantly alters the federal definition of research misconduct” and removes the federally regulated six year statute of limitations.

“An unlimited statute of limitations, which is what’s proposed under the [current] definition, will subject an individual and the university to greater liabilities and NKU will have difficulties investigating older clams.”

The Board of Regents adopted the president’s recommended policy with all members in agreement except Regent Micahel Baranowski.

The funds will go toward costs such as food, housing costs, materials, technology, health care and childcare. As of Monday, over 950 applications have been completed.

Other funds include a $25,000 Chase Bridge Emergency Fund that has impacted over 70 law students and the $20,000 Benevolent Fund that assists NKU employees and families in need.

15,000 Initiative is a new program where NKU faculty and staff call undergraduate and graduate students to check on them during the summer, according to Vaidya.

According to Vaidya, the COVID-19 preparedness team, headed by Provost Sue Ott Rowlands, will share their recommendation for the fall semester’s operation later this month. The university will be working “on some on-campus operations” as a phased transition beginning in July.

Regardless of the approaches taken to resume regular campus operations, Vaidya said there will be a negative impact. He has requested interim Vice President Mike Hales and Dr. Karen Miller, chair of political science, criminal justice and organizational leadership, to make recommendations to better the campus.

A groundbreaking for the new residence hall in Lot F is planned for later this month and plan to open the building in the Fall of 2021.

Regent Normand Desmarais recommended a tuition freeze for the fall semester while noting housing costs are expecting a 3 percent rise in cost.

“Due to the disruption and uncertainty with the COVID-19 situation, a tuition freeze for undergraduate tuition is recommended for fiscal year ‘21,” Desmarais said. “In addition for competitive reasons, a number of graduate programs, particularly education and business are proposed to be reduced for fiscal year ‘21. Overall housing fees are proposed to increase at a weighted average of approximately 3 percent.”

Parking rates were proposed to be held flat and the price of meal plans would be based on the new contract with Chartwells.

Dr. Dale Stephenson proposed a 3-year doctorate program for occupational therapy. It would be a 117-credit program with approximately $845 per credit.

Dean of College of Informatics Dr. Kevin Kirby proposed a Bachelor’s of Science in applied engineering. Kirby said there is nothing like it in the area.

Mike Hales proposed the 3 percent rise in housing cost and a new meal plan option. The Board then voted on the tuition freeze for undergraduate and undergraduate programs, with some exclusions. The tuition rates for the Colleges of Business and Education would decrease while that of Chase Law would increase by 4 percent.