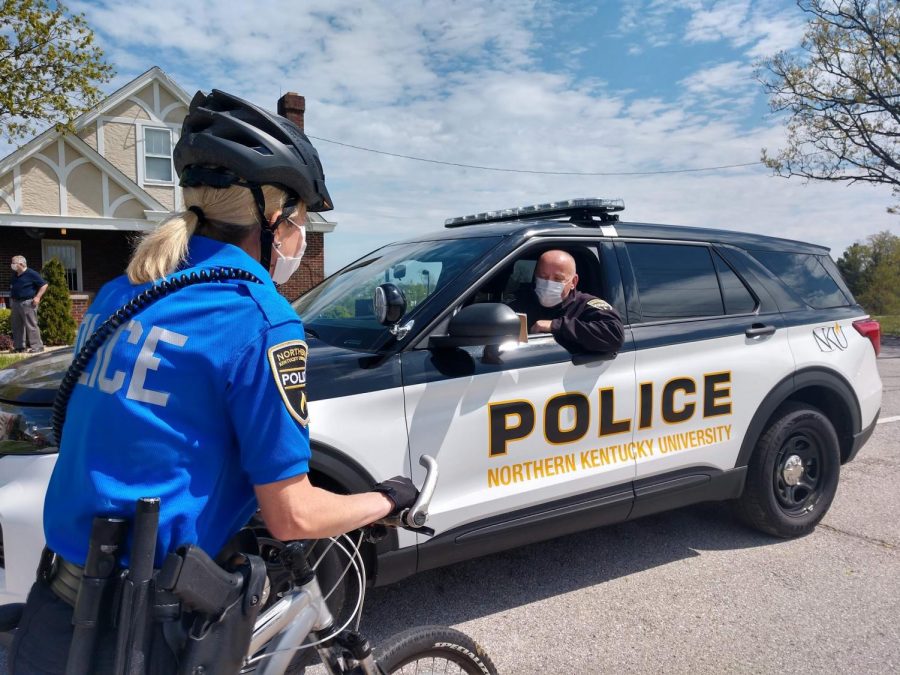 Officer Dewayne Cox (in car) and Officer Autumn Ruehl (on bike) with Detective Bobby Pate in the background.

Patrolling campus during a pandemic: how officers are staying safe

Essential workers on campus, such as police officers, still report to their jobs

While COVID-19 has initiated a wave of work-from-home orders, some positions still require boots on the ground. For university police officers, maintaining the safety of NKU’s campus cannot be completed from the safety of their homes.

According to University Chief of Police John Gaffin, only a third of his staff has moved to virtual work. For the rest of campus police, their regular duty continues, though several aspects of work have changed.

“Everything is different,” Gaffin said.

Before reporting for duty, officers and staff personnel have their temperatures taken. They wear face masks and gloves at all times. Community-shared items such as desks and cars are sanitized throughout the day.

Though there are less students to protect, desolation on campus poses a new threat.

“One of our concerns is protecting campus assets,” Ruehl said.

Because there are less eyes on campus, the risk of opportunity crimes has risen, according to Ruehl. It is now solely dependent on patrol officers to ensure the safety of campus property.

University officers still patrol the campus on an hourly basis like they had prior to COVID-19, and Ruehl attributes this practice to keeping the rate of property crime down in the area.

“Just the presence of an officer is enough to deter crime,” Ruehl said. “Especially crime of opportunity.”

The crime of trespassing has recently risen because students are venturing into restricted areas, such as intramural sporting fields. While the majority of the remaining students have been compliant, Gaffin said a small fraction of the population has made dangerous decisions by not taking the virus seriously.

“There’s this belief that college-aged people aren’t affected by the virus, but that’s just not true,” Gaffin said.

According to a report by John Hopkins Medicine, new data suggests young adults are more vulnerable to virus symptoms than initially reported. While young adults still have a higher chance of recoverability, there are also indirect ways that they can suffer from lasting consequences, Gaffin said. An infected student’s older family members—grandparents, aunts and uncles, or even parents—can contract the virus and have a harder period of recovery.

Because of these risks, campus police strongly encourage students to remain in the designated areas on campus.

For Bobby Pate, a detective with the university police, the entire nature of his job has changed.

According to Pate, detectives can no longer conduct interviews due to social distancing compliance. This change has made it more difficult to investigate crimes, though Pate has still made it a top priority to update victims as much as he can.

An unforeseen adjustment to new protocols has been the loneliness, Pate said. Campus police officers use talking the most when handling a situation. Now, as they approach civilians, officers must stand twelve feet away and reduce communication to a minimum.

According to Gaffin, COVID-19 has also impacted their new hires. Officer training has been transferred to online, but some experiences—such as shadowing an established officer on patrol—are impossible to virtually replicate.

Though officers are still driving to work everyday, the transition has not been easy. Campus police officers shoulder the dual responsibilities of being essential workers and first responders; Gaffin said he wanted to emphasize the humanity hidden behind their face masks.

Many officers share the same sacrifices as civilians and students. Most staff members are students with deadlines or parents to small children, according to Gaffin.

“You can’t separate the first responder from the person,” Gaffin said.

As a law student, Gaffin said he’s found the Zoom-based seminars to be more difficult than the in-person classes. On a walk through the local park, Ruehl had to explain to her small children why they couldn’t play on an empty playground with yellow tape strewn around it. Pate also expressed concern for the health of his family. Even a trip to the grocery store is considered a high-level risk, he said.

Despite the tribulations, university police are still dedicated to the health and safety of NKU’s campus.