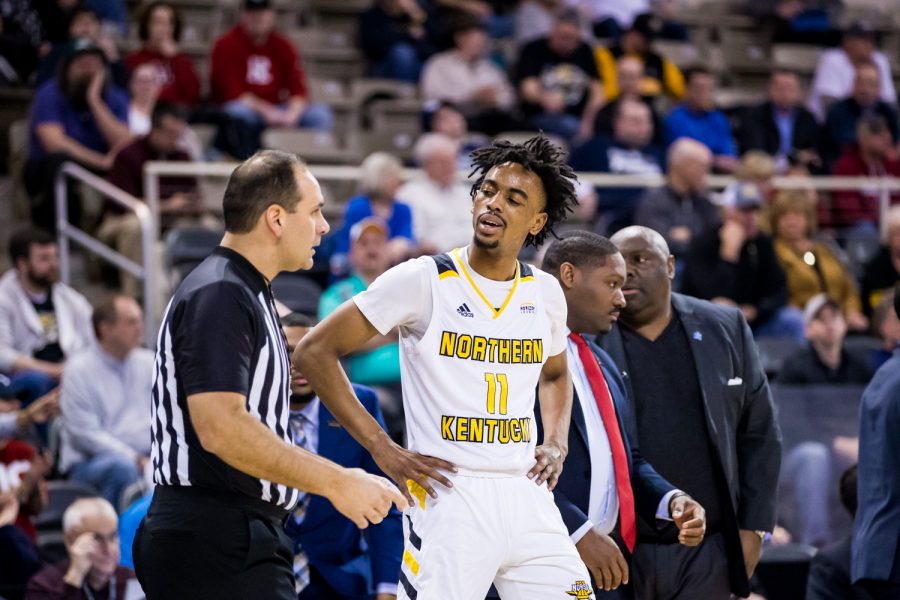 Jalen Tate (11) argues with a referee about a call during the final game of the Horizon League Tournament against UIC. The Norse defeated UIC 71-62 and have now secured a spot in the NCAA Tournament.

The NCAA cancelled the men’s and women’s Division I basketball championships on Thursday afternoon, as well as all remaining winter and spring championship events.

The decision comes after the global pandemic of COVID-19, known as coronavirus, in the U.S., and the country’s growing need to practice social distancing to ensure the virus does not spread any further.

This would’ve been NKU’s third trip to the tournament in just four years of eligibility, enjoying an unprecedented level of success for the program.

The Norse’s first year of eligibility was in 2017, where they advanced to the NCAA tournament and played the University of Kentucky in the first round. The next year, the team lost in the Horizon League Tournament and competed in the NIT. In their third year of eligibility, they won the regular season and defeated Wright State in the Horizon League Tournament to advance to the NCAA tournament again, where they played eventual runner-up Texas Tech in the first round.

A statement from Horizon League headquarters indefinitely suspends all Horizon League-sponsored sport competitions effective Friday, March 13. Individual schools will make their own decisions regarding practice and continuation of recruiting travel.

Some of the Norse players took to Twitter to voice their opinions on the tournament’s cancellation, including senior Tyler Sharpe and graduate student Karl Harris, who came to NKU with the specific goal of playing in the tournament:

Man…. I don’t even know how to feel…😢 https://t.co/JcltFuDLtw

There is no word on whether the NCAA will consider postponing the tournament to a later date. As of now, it is officially cancelled.

The Northerner is currently investigating the impact of the switch to online learning, including but not limited to how housing, dining, student workers, labs, studios and the office of Health, Counseling and Student Wellness will be affected. For any questions you’d like to know about the decision, contact us anytime on Twitter or Instagram. For questions or concerns about how the virus could potentially affect campus, email covid19@nku.edu. Keep checking The Northerner for all updates on NKU’s switch to alternative instruction.