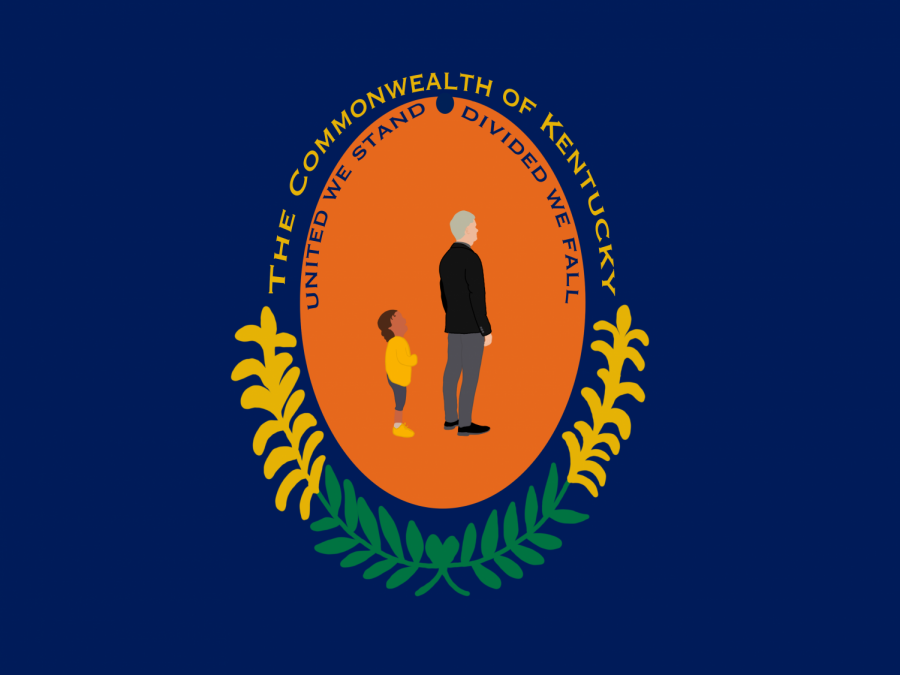 Veronica Sanchez, junior Spanish and secondary education major, has lived as an undocumented immigrant in Northern Kentucky since she was 3 years old. Her father didn’t complete elementary school and her mother graduated high school, so both her parents moved their family out of Mexico in search of better educational opportunities and to better provide for their family.

“It was worth the risk of coming over,” Sanchez said, adding that it was much easier to immigrate 20 years ago than it would be currently. “I’m happy we’re on this side.”

Despite the United States being a safer place to live than where Sanchez was born in Mexico, her and her family’s lives have been different than documented citizens. She remembers her mother being cautious of Sanchez and her siblings leaving the house while growing up.

“I remember once there was a white van parked outside of our house and my mom was like, ‘Do not go outside, whatever you do, do not go outside,’” Sanchez said. “I was 7 maybe and I don’t get it. I don’t wish that fear on anybody.”

Sanchez applied for Deferred Action for Childhood Arrivals (DACA) when she qualified in 2014 and has since been a recipient. DACA allows her to work, which has, in turn, supported her attending college. The program hasn’t been accepting new applicants since 2017 and the future of DACA is uncertain. Currently, Sanchez qualifies to work in the U.S. and attend school, but the proposal of Senate Bill 1 may prohibit Sanchez from completing college.

“I didn’t plan on going to college, but now, here I am, and I would like to finish,” Sanchez said.

According to Sanchez, her counselor told her she would receive her Kentucky Educational Excellence Scholarship (KEES) money, but the state of Kentucky requires KEES recipients to be a U.S. citizen, national or permanent resident.

Sanchez said she’s scared to drive for fear of getting pulled over. Resources at her high school were scarce for her and other undocumented students. Without the help of her best friend—who helped her through the college application process—she wouldn’t have even applied for college. She wishes school faculty and staff were better educated on issues regarding their Latino student population.

Introduced in the Kentucky Senate on Jan. 7, Senate Bill 1 would prohibit sanctuary policies in the state. Sanctuary cities prevent law enforcement from questioning people on their legal status. While Kentucky doesn’t currently have any sanctuary cities, SB 1 prohibits the enactment of any in the future. (Louisville is considered a ‘compassionate’ city, meaning they don’t check legal status of people arrested, assist ICE agents in making traffic stops or knocking on doors of those they think are undocumented, but they are not a sanctuary city.)

The bill would “require law enforcement agencies, public officials, representatives, agents, and employees of public agencies to use their best efforts, considering available resources, to support the enforcement of federal immigration law,” yet this exempts K-12 educational institutions.

Some university personnel, such as campus security and law enforcement, would be required to comply with SB 1 to determine the status of immigrant students.

According to the bill, “a campus security authority defined as campus police, security officers, and any official at a postsecondary education institution who has significant responsibility for student and campus activities, including student discipline, student housing, student judicial affairs, and student life administration.” Mental health professionals and counselors are exempt.

The Courier-Journal reported during the initial release of SB 1, Kentucky Republican Senate President Robert Stivers believed that DACA recipients should not be allowed to enroll in public colleges and universities.

The current status of SB1 is unclear on its application to Dreamers. Recipients must reapply every three years, and because DACA is currently in the Supreme Court with the uncertainty of whether it will be continued or not, students with DACA don’t know if the bill includes them.

“That’s why this bill is scary,” Sanchez said. “I graduate in 2022, and it goes into effect ‘21. That ruins my chances of at least finishing school.”

Why do people immigrate?

Mike Hummel, an attorney at Hummel and Hummel, LLC and a 2004 graduate of NKU’s Chase College of Law, specializes in immigration cases and is currently aiding one of Sanchez’s family members in applying for citizenship. He believes the bill is going to become law. Hummel graduated with the goal of helping people—whether that be those accused of criminal offenses, children or members of vulnerable communities like immigrants.

“My experience is that most of my clients are escaping terrible circumstances,” Hummel said. “If you don’t leave, then the gangs are going to take everything you own, and they may kill you. The political parties in place may find out where you are, stop you from talking permanently.”

Sanchez said where her family is from in Mexico has a high crime rate. While her family moved for economic reasons, she also recognizes that violence is a major determining factor.

“Family members have gone missing,” Sanchez said. “To this day, we don’t have any answers on where they are.”

However, the success rate for asylum seekers is low, according to Hummel. Chances increase with filing for cancellation of removal while success rates skyrocket with applications due to marriage to a U.S. citizen.

“The policies surrounding who qualifies for asylum continue to be more and more restrictive,” Hummel said. “What will qualify for asylum, perhaps 10 years ago, oftentimes will not qualify you for asylum today.”

When Sanchez’s aunt first arrived in the United States, she worked at a supermarket where she was held at gunpoint during a burglary. After, she applied for permanent residency—which wasn’t approved for seven years, according to Sanchez.

According to Hummel, there is a huge backlog when it comes to the immigration system.

“There is simply a crush on a system that was not designed to accommodate the number of people that are trying to use it,” Hummel said.

NKU’s Latino Programs and Services hosted an info session on Feb. 12 to discuss the potential effects of SB 1 if passed. A packet outlining the basics of the bill was provided, which says, “if you are brown, or black, or your English isn’t perfect, the police must use their best efforts to determine if you have legal status in this country.”

SB 1 prohibits the consideration of race, color, religion, language or national origin. However, it states that law enforcement officials should “use their best efforts” to determine the citizenship status of a person—yet there are no plans to train officials in what this entails.

Leo Calderón, Director of Latino Student Affairs, said that when he became director in 2001, the program began with 57 students. Now, there’s over 500. However, the data for how many are documented, or undocumented, isn’t available.

“This is an issue that affects all,” Calderón said. “How are we advocating the education success of our students in general—including Latino students who may be born in the U.S. to undocumented parents or students who are legally here?”

Calderón said undocumented students have historically been encouraged to attend schools like NKU and pay state tuition due to their ineligibility for the FAFSA. Legislation like SB 1 targets an already marginalized community and makes it even more difficult for them to continue higher education.

Although freshman construction major Jacky Romo is a citizen, she has family members who could be negatively affected by SB 1.

“[My family has] been here 20 years with no criminal record, paying taxes, working just like anybody else,” Romo said. “I just think it’s crazy how it all works.”

“The main reason why people immigrate is to find a better way of life,” Romo said.

Since SB 1 doesn’t explicitly state how law enforcement should use “their best efforts,” Romo said she and other Latino students are unsure if they could potentially be pulled aside simply for their ethnicity. Hummel encouraged students to carry identification on them, or, if the worst happens, call a family member to bring identification to where they’re being held.

“It’s also hard because your parents are undocumented, you can’t just be like, ‘hey, can you come to the police station real quick and bring me my things?’ without putting them in a difficult situation,” Romo said.

How students can be protected

Calderón said undocumented students and DACA recipients should look into their options and bring awareness of these issues to administration.

“I encourage students to go and talk to each other, encourage them to go in and form support,” Calderón said. “Organize themselves at the university, organize other universities and collectively, you would have a better chance to address some of those issues.”

Allies play an important role in raising awareness and supporting other Latino students. NAACP campus chapter President Luke Kues, fourth-year biology and psychology double major, attended the info session and offered to begin a committee with objectives on how to move forward.

Kues said the start to becoming a good ally is “just being intentional with having new experiences and being okay with being a little bit uncomfortable.” Creating allies begins with encouraging organizations you’re in to collaborate with other people of different backgrounds, according to Kues.

Because DACA recipients aren’t given the right to vote, allies are vital in advocating for immigrants’ rights.

Sanchez said “if I could stay here, I would.”

“I’ve said it since I was a girl. If I can give up my Mexican citizenship and become an American citizen, I would in a heartbeat,” Sanchez said.