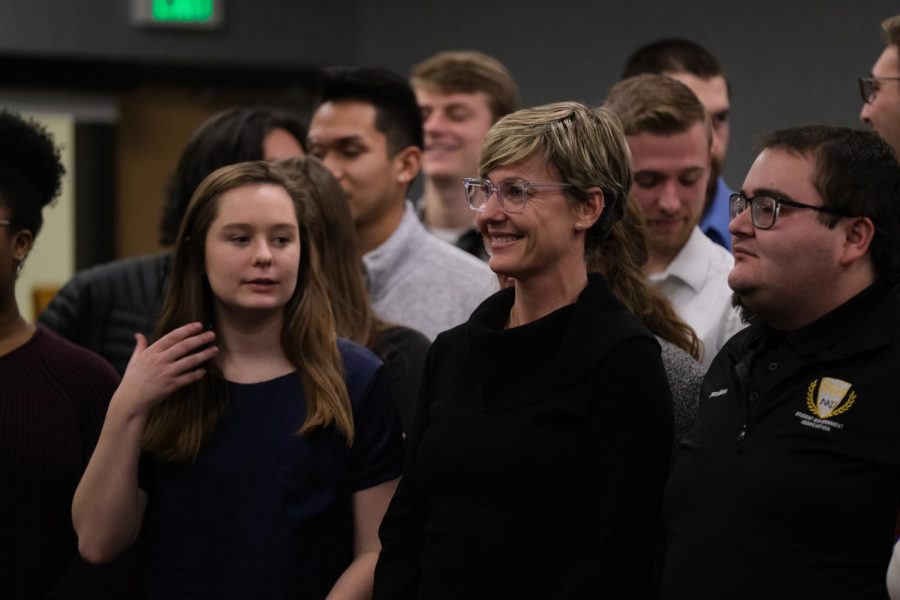 On Monday, SGA had an update on the Strategic Enrollment Management Plan (SEMP) for the 2020 to 2024 school years and got a visit from Rachel Roberts, the Democratic candidate for the Kentucky District 67 State Representative.

Roberts, owner of the Yoga Bar in Newport, isn’t new to politics. After she built her yoga studio, she decided that she really wanted it to be a part of the community. According to Roberts, that decision is what led her to become a politician.

“What I wanted to do with the business was use it to support the community and to do right by my community … We always reach out and try to make this practice accessible to everyone in the community,” Roberts said.

Through her business, Roberts found herself becoming more and more politically active. She canvased, raised money for politicians and held what she called “Community Learning Series” events where politicians running for local elections—regardless of party affiliation—can go to her yoga studio to practice yoga and stick around afterward to tell community members about themselves.

According to Roberts, she began to build awareness by being politically active for other politicians, but she realized what she was doing wasn’t enough.

In 2018, she ran for Kentucky State Senate for District 24 because “teachers were on strike and our public education system were under attack.” She lost to Republican incumbent Wil Schroder by less than 6,000 votes.

Roberts said that even though Kentucky has a new governor, her issues haven’t changed over the past two years.

“I’m a product of public schools, I didn’t come from money. If I hadn’t had a great public school that I could go to for free, I would never be standing here—I just wouldn’t,” Roberts said. “I believe everything in our community starts with education.”

Ryan Padgett, assistant vice president of enrollment and student success, gave a presentation to SGA on how SEMP’s goals integrate with Success by Design—the university’s existing student success strategic framework—and how it addresses enrollment while accounting for a changing environment under a new regional and national economy.

“In essence, [Success by Design] is already an enrollment strategic management plan,” Padgett said. “We were then going to align [SEMP] with Success by Design, but we went with a different approach, a very new and innovative approach.”

Instead of strategies and initiatives, like in Success by Design, SEMP includes aspirational numerical goals based on current enrollment statistical data.

According to Padgett, SEMP is successful if it achieves a growth in enrollment, an increase in retention and graduation rates, closing of achievement gaps and includes an increase in the number of first-generation, post-traditional, international and underrepresented students.

The guidelines for SEMP to ensure the success of these goals are the promotion of student success by “purposely being learner-centered,” align with external and internal planning while for creative and aspirational goals, support the fiscal health of the university to help and inform decision for resource allocation “around the core values,” respond to the needs of the region and be market-driven and further equity.

The special election for District 67 is on Feb. 25. Find your polling place at elect.ky.gov.

Student Government Association meets every Monday at 3:30 p.m. in SU 104.