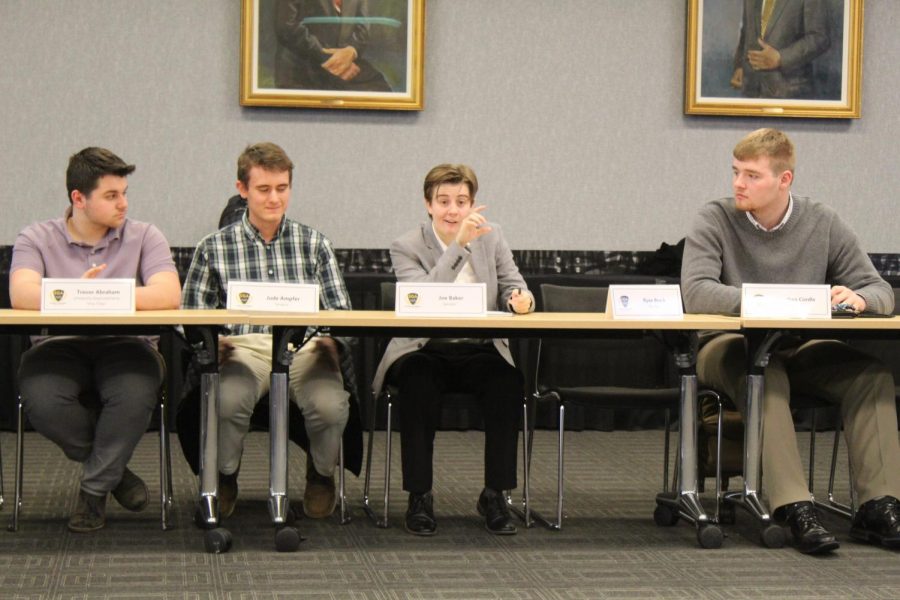 Senator Joe Baker advocating for changes in the library during Monday’s meeting.

Committee Chairwoman of University Improvements Onyinyechi Okorie pitched the idea of having the facility open 24 hours, to which Falcone said she is encouraging staff to conduct space usage studies.

“I’m encouraging our staff to do some space usage studies so that we can make evidence-based decisions about when we’re open and when we’re not,” Falcone said. “I’m not sure how we got to the decisions for our hours currently. That’s something that we’re looking into.”

Senator Jude Ampfer said the study rooms could use updated technology, including projectors to display slideshows in the room.

“We are looking into that actually, as we speak,” Falcone said. “I’m blown away by the lack of technology that’s available in the library.”

Senator Michael Morataya, a trilingual student, said he doesn’t find any books in Spanish or Portuguese and finds it hard to do certain assignments without the proper materials.

“Me and my friends find it kind of difficult to find books in Spanish and I can not find any books in Portuguese so it’s kind of hard,” Morataya said. “I was thinking of a way to increase the multilingual books available.”

Other ideas included fixing the lighting on the second floor, updating furniture, a map of book genres and topics, increasing the amount of printers, altering room checkout system and to keep Einstein Bros Bagels open later, along with others.

“I think it’s important to listen to the students and also communicate with what some of our challenges are as an organization on campus,” Falcone said.

Falcone continued to talk about the library’s efforts to lose the warning on the University’s accreditation.

Falcone said the university was put on warning for two issues, one being the lack of library information and support services.

The library received $750,000 in additional funding from the university in January.

“So that 750,000 is really designated for two things—and I’m going to say this generally—updating our collections, and then also providing some salary dollars for positions that help get those collections into the hands of users,” Falcone said.

With $750,000, the library has already subscribed to three new databases, including CINAHL, Business Source Complete and International Bibliography of Theatre and Dance. They also started an anatomical model collection of five pieces including a small heart and the levels of the skin.

According to Falcone, there is also a proposal for the fiscal year 2021 (FY21) budget to include a $1.5 million increase.

“Destress Before the Test” is a student-involved event where students will be able to color in pictures of Victor the Viking and the SGA logo. The event will be held on Feb. 27.

President Jarett Lopez reached out to the Mary Jo Wedding (R) campaign and the Rachel Roberts (D) campaign. Roberts will be visiting SGA’s open session next Monday. Wedding was unavailable to come to the meeting.

The Town Hall that was announced for next Monday has been canceled. The new date has not been announced yet.