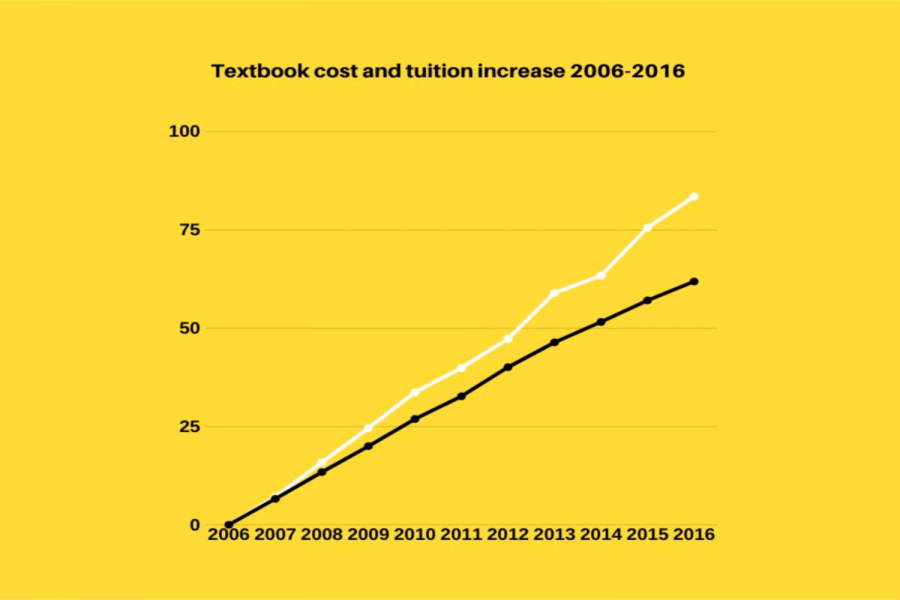 “It’s ridiculous that I’m spending $30 on a book I’m going to use in a class for one semester,” freshman computer science major Seth Mac said.

The cost of course materials is a common complaint on college campuses, but some students and programs at NKU are finding ways to undercut the increasing cost.

Textbook prices per semester are not as clearly defined as tuition. It fluctuates with every student’s class schedule, the question of “how many and how much?” only being answered after the first day when students read the required materials clause in the syllabi.

Whatever the exact price for each student’s course load is, it may exceed a thousand dollars. College Board suggests students should set aside at least $1,240 per year for course materials such as textbooks.

Reynolds has written several textbooks; his most well-known, “Africa in World History,” is one of the best-selling textbooks on African history in the world. When the book first came out in 2004, the price was $34. Now, a new copy is available to buy for $85 on Amazon.

According to Reynolds, the increasing price of textbooks is due in massive part to the explosion of the used book market in the mid-2000s.

Now, with the use of the internet and fast shipping, students are able to buy and trade used books without textbook publishers operating as the ‘middle man.’ According to Reynolds, the value of a textbook decreases rapidly after its first year of publication because students are more likely to buy or rent materials from other avenues rather than the original publishers.

To cope with the loss of income, the publishing companies have increased the initial prices of new textbooks. According to a study by the United States’ Bureau of Labor Statistics, textbook prices have increased by 88% between 2006 and 2016.

Despite the rise in price, college students are spending less on course materials, according to a 2019 study by the National Association of College Stores. In the study, researchers contribute the decrease to better student awareness of cost-efficiency programs and easier access to alternative retailers.

Many college bookstores, including NKU’s, have implemented ways to alleviate the financial burden. Rental programs and used copies are available at a markdown price. Digital formats have also been a popular alternative for students, according to NKU bookstore manager Elaine Perkins in an email.

Ultimately, the extent of the discount is determined on availability. According to freshman nursing major Tori Hubbard, the NKU bookstore did not have many used textbooks available for her course load. She said she only purchased one textbook from the campus bookstore this semester; she bought the rest from online retailers such as Amazon and Chegg.

“I only got them [at the NKU bookstore] if I had to,” Hubbard said.

According to Hubbard, alternative retailers are cheaper than the standard bookstore. One textbook she needed was $124 to purchase at NKU’s bookstore. On Amazon, it was $78.

According to Perkins in an email exchange, the bookstore “applies an industry standard margin to the cost, which covers such expenses as freight, labor (to receive, shelve, and return excess inventory) as well as the costs to maintain both a physical and online bookstore.”

Amazon doesn’t have as many expenses, save for storage and licensing costs. Because of that, online retailers are able to sell textbooks at a lower cost while still making a considerable profit.

According to the NKU bookstore’s website, NKU offers multiple programs to mitigate costs, such as textbook buyback and price match. The buyback program allows students to sell back textbooks to the bookstore for up to 50% of regular cost while the price match program is designed to match the cost of the same books by online retailers.

Another option on NKU campus is the Lending Library, located in room 120 of the University Center. The program, organized by University Connect and Persist (UCAP), allows students to borrow from their catalog of over 800 textbooks with no charge. The only condition of the program is for the student to meet one-on-one with a UCAP personnel for 15 minutes to talk about their financial and academic success.

According to UCAP Coordinator Britany Ranz, research on textbook affordability has shown that a textbook’s significant cost is a significant financial concern.

“Sometimes students have to pick if they’re going to buy that book or buy groceries,” Ranz said.

While it is important to supplement the financial need of a student, UCAP director Peg Adams said the primary mission behind the Lending Library is to facilitate a foundational outreach for general student needs.

“When we meet with the students, we find out about what’s going on with their financial aid or other challenges they may be facing,” Adams said.

The Lending Library typically only allows students to borrow one textbook per semester. UCAP associate director Lanighta Reid said there are exceptions for veterans and students in extreme financial circumstances.

Students are encouraged to make an appointment with UCAP, though walk-ins are accepted upon availability.

According to Perkins, the NKU bookstore also provides resources for students to understand textbook affordability.

Perkins said in an email, “We’re always available to help students explore their best options and walk them through the different ways they can save on course materials.”

According to English department chair Dr. John Alberti, professors are also trying to curb the financial demand of students in their coursework.

“More and more faculty members also take the cost of textbooks into consideration in class planning, opting either to forego textbooks in favor of individual readings or other sources or, in some cases, making some essential textbook chapters available via Canvas,” Alberti said in an email.

Reynolds also recommends students to look for open-source textbooks, which have risen in popularity over the last few years; these textbooks are placed online for free under an open copyright license.

According to Mac, it’s important for students to look at all of their options for purchasing course materials.

The Lending Library is launching a donation drive this week to help better fund the program. For more information, visit room 120 UC.