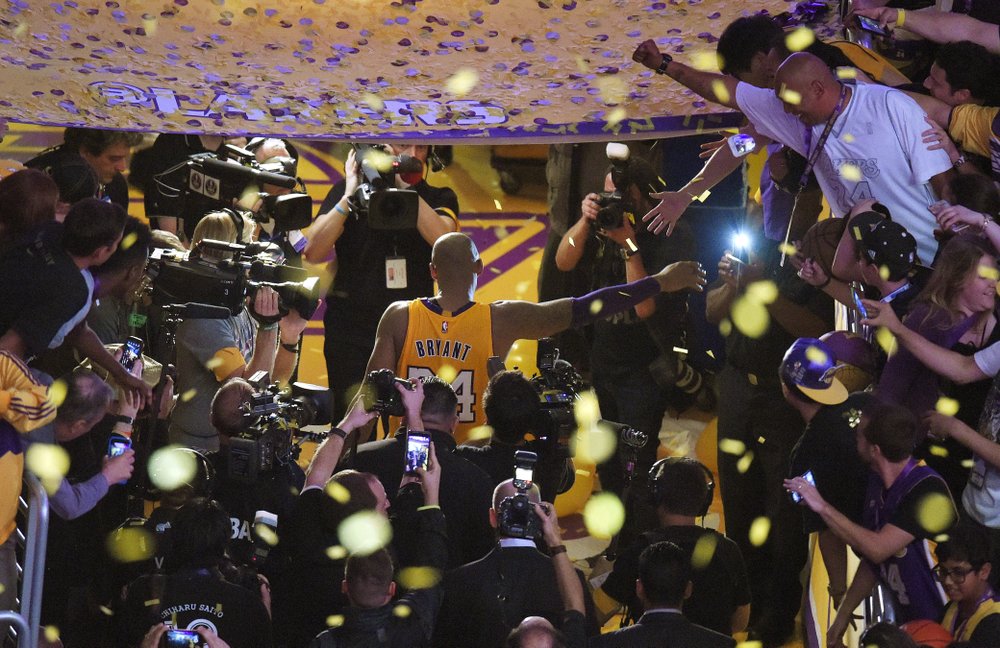 Kobe: NKU appreciates the life of an NBA Legend

Sunday morning, NBA legend Kobe Bryant and his 13 year-old daughter Gianna “Gigi” Maria-Onore Bryant died in a helicopter crash along with seven others. TMZ was the first to break the story of Kobe Bryant being involved in the helicopter crash. Hours later, they revealed the identities of John and Keri Altobelli, the parents of Gigi’s teammate Alyssa Altobelli. Sarah Chester and Payton Chester (13), Christina Mauser—a girl’s basketball coach—and the pilot, Ara Zobayan were also on board.

“Growing up—my entire childhood—we had these debates all the time: Kobe, LeBron or Michael Jordan, and I would take Kobe,” Redshirt junior guard Jalen Tate said. “You don’t gotta tell me no stats. You can have all the facts to back it, but it’s always something in the back of my heart and mind just knowing ‘No, I don’t care what you say! Kobe’s greater! Kobe’s always going to be great.’”

Sunday afternoon, NKU men’s basketball team had just finished practice when the news broke of Bryant’s passing. The team was finishing their stretches when Coach Horn brought the team back together.

“Usually, after practice, all the coaches get out of [the gym], have their post-practice coaches meeting and coach stayed out a little longer,” Tate said. “And he actually brought us back in together after we broke [the huddle] the first time to let us know the news.”

Senior guard Tyler Sharpe explained how a wave of disbelief came over the team and that no one could grasp what actually happened in that moment.

“Everybody was like, ‘Kobe?’ because obviously you only know one Kobe,” Sharpe said.

Sharpe recalled his first memory of Kobe’s impact on his life in seventh grade. Sharpe said his mom bought him basketball shoes once or twice every year. One week, he wasn’t feeling too well and used that as leverage to help get a specific pair of sneakers he had in mind: one of Kobe’s signature shoes.

“A pair of Kobe’s that had been on TV every commercial and that was the first pair of shoes that I actually picked out at Foot Locker. I got to pick the exact color and the exact shoe that I wanted,” Sharpe said. “And it just happened that my middle school team was black and yellow, like the Lakers, kind of, so they matched. But that that memory stuck with me just because that was the first time I ever picked out my own pair of shoes.”

Although he grew up partial to LeBron, Sharpe never questioned Kobe’s mentality—the Mamba Mentality everyone has come to appreciate.

“In the back of your mind, Kobe is gonna win the game, like this is how it goes. It doesn’t matter who’s on a team, who’s hurt. Kobe is finding a way,” Sharpe said. “That’s something that, even if you’re not a fan, you appreciate and as a basketball player, something that you want to take note of and carry with you.”

Tate had a hard time believing Bryant had passed even after 24 hours of coverage. To Tate, sports legends like Kobe appear to be “immortal, you don’t picture that day that they’re leaving earth.”

Sharpe took the news personally as he spoke with sophomore teammate Trevon Faulkner. He said that it reminded him Bryant and James are only human, even though “we put them on such a high pedestal that it doesn’t seem like that’s even fathomable.”

Sharpe went on to acknowledge that Bryant and James are human despite their status as basketball legends.

Since the passing of Bryant, many tributes have been made across the NBA and the world of sports. During his career, Bryant wore jersey numbers 8 and 24—both were retired by the Lakers in 2017. In several recent NBA games, 24 second shot clock violations and 8 second backcourt violations have been committed in his honor.

Several teams have worn 8 and 24 jerseys during warmups, and some players who currently wear 8 or 24 in games—like Nets guard Spencer Dinwiddie—are permanently changing their jersey numbers. Fans are even petitioning to have Gigi’s AAU jersey hung in the rafters of Staples Center in between his iconic Lakers gear.

Despite these acts to honor Bryant, Sharpe feels that something more permanent would fit someone of Bryant’s caliber.

A petition that has now reached over 2 million signatures was started to change the NBA logo to the silhouette of the legend.

“Rebranding is good for anything. Jerry West had a great career, one of the best players ever, but he’s not the best player ever,” Sharpe said. “If you’re going to rebrand with somebody like Kobe, nobody’s going to disagree with it.”

Many NBA players who are currently in the league credit Kobe for different aspects of their game. Sharpe looks up to Damian Lillard of the Portland Trailblazers because of his reputation for being an underdog and his sharp style of play. Tate looks up to Kevin Durant of the Brooklyn Nets because of their similar builds and style of play, and Kyrie Irving for “the way he goes about his craft.” All of these players have shown, in both the past and the present, an appreciation for Kobe Bryant.

“I’ve gotten closer with people [because of Kobe.] The closest people in my life, we all have loved Kobe. My mom, my uncle,” Tate said.

For the past few days, stories of Bryant’s life has brought people together—although in trying times, he still inspires everyone with his unprovoked passion to achieve his goals and the goals of the people around him.

In the words of Bryant,