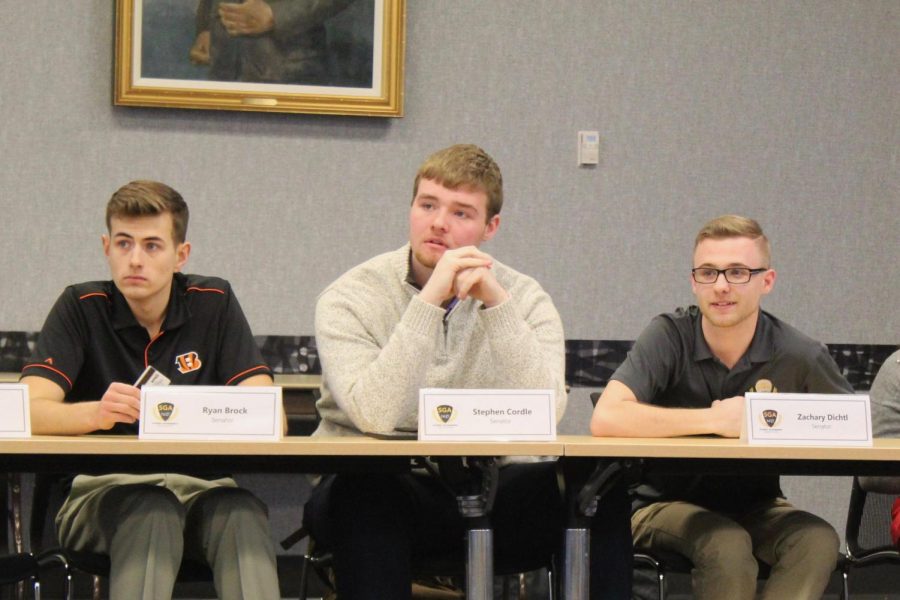 Secretary of Public Relations Jessica Archer revealed the design pitches that herself and Senator Will Jones designed. They showcased three ideas, two of which included a solid color backing and the NKU seal opposite of the student’s photo. The other design featured the NKU Athletics logo instead of the seal.

Archer said that when the University decides what designs it approves of, it will then allow the student body to vote on the best design.

SGA announced that it will be holding interviews for mid-year inductees to the senator position. They have 14 applicants that have applied for the position and will interview the candidates on Jan. 30 and 31. The new senators’ first meeting will be Monday, Feb. 3.

“Secretary Clary mentioned that we have 14 applicants for the Senate, which is the highest we have ever seen in a midterm appointment,” SGA President Jarett Lopez said. “I’ve already had people start reaching out to me interested in being a part of 2020-2021. That’s super exciting.”

The philanthropy event scheduled around the Feb. 28 men’s basketball game against Wright State University is being rescheduled. Philanthropy and Service Committee Chair Lauren Goodwin pitched the idea of moving the event to the Feb. 14 game against IUPUI. Because it will be Valentine’s Day, Goodwin would like to sell “candy grams” for a dollar, where customers will receive them during game time.

The Rally for Higher Education was announced for March 3 at 10 a.m. to 12 p.m. Lopez said the speaker is OJ Oleka, who is the president of the Association of Independent Kentucky Colleges and Universities.“He offers a lot of really cool insights into higher education and why it works. Make sure you sign up because it’s a really important event and bring a friend,” Lopez said. “Our goal is to bring 30 students, which is very doable.”