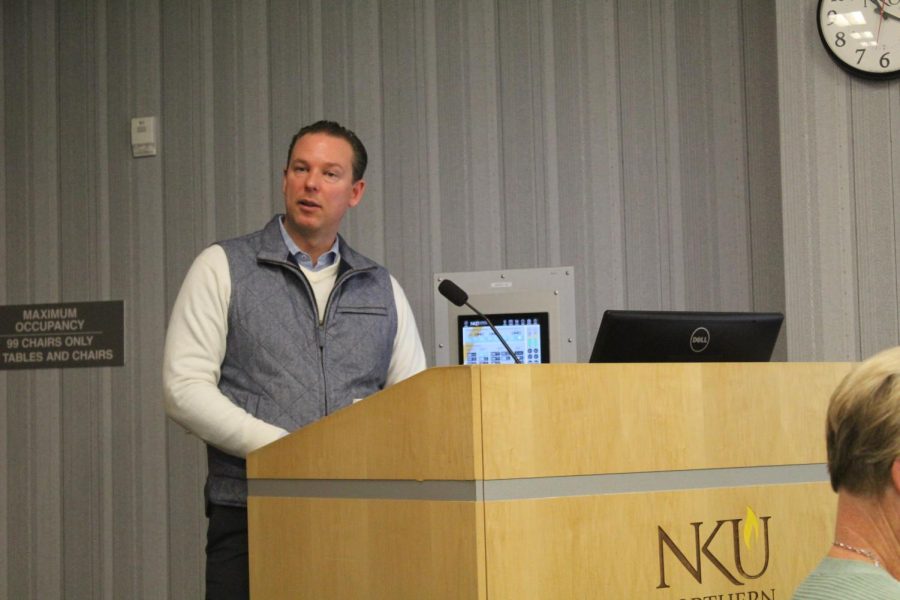 Adam Grant from Fairmount Properties spoke to SGA on Monday.

During Monday’s SGA meeting, Adam Grant from Fairmount Properties gave an update on the construction happening on the corner of Nunn Drive and Alexandria Pike. Grant said the function of the center would be the place where NKU and the community intersect.

“It’s a place for shared gathering. It’s a place for coming together to shop, to dine, to live, to work, to recreate,” Grant said. “It’s an attempt to establish better connectivity between the campus of NKU and Highland Heights.”

The first phase of construction on the OrthoCincy building and St. Elizabeth Healthcare Center is expected to be finished and opened in April 2020. Phase II is expected to include retail and restaurant space, market-rate apartments and an extended-stay hotel with meeting space and professional office space. Plans for Phase III are not yet decided.

Phases II and III are expected to be in the field opposite of the current construction. Grant also asked opinions on potential names for the center when Phase II and III are completed.

Justice Mia Derks said that the intersection is a high traffic area and asked if there were any plans to help with the traffic. Grant said that Marshall Lane is looking to be the primary access to relieve some traffic off of Nunn Drive.

Justice Lauren Goodwin asked what would be the appeal to get students to live in the apartments when there are less expensive options around campus. Grant said that it’s about value proposition.

“It’s about finding people that are willing to pay a particular rent for a certain set of amenities for a certain level of finishes within the apartment. And for the convenience of being close to campus and everything that that means,” Grant said.

After the discussion ended, student body president Jarett Lopez opened the floor for committees to give updates on projects. Derks said construction on Sbarro will begin the week following Thanksgiving. During this, the area behind Build Pizza and Tú Taco will be shut down. However, Tú Taco will be moved during the construction period.

There is still talk about the decision between putting Qdoba or Panda Express on the first floor of the SU.

“Now, if you complain about how you weren’t able to find a spot for 20 minutes, there is a small chance you will get accepted instead of no chance,” Konderer said.