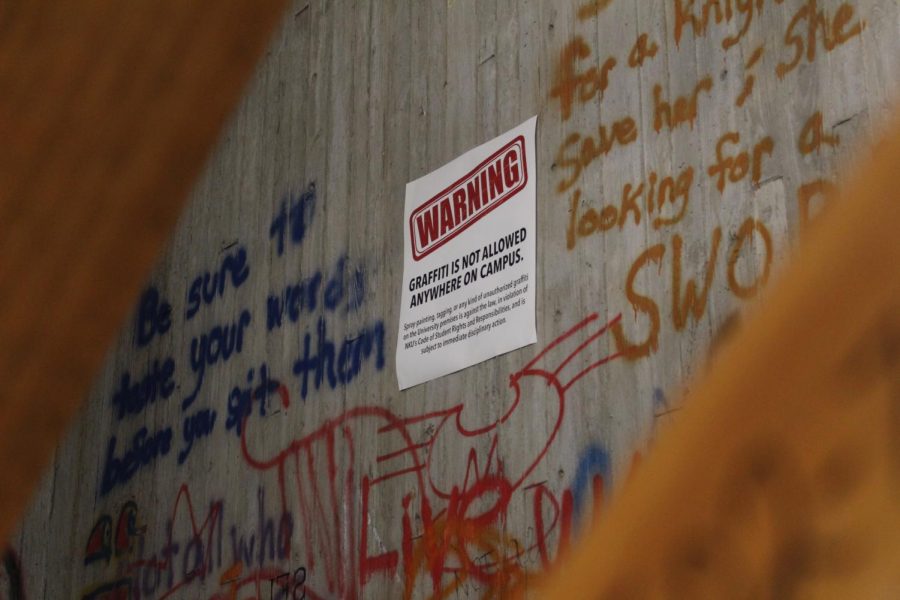 It’s back to the drawing board for the faculty of School of the Arts as they continue to pursue solutions to promote self-expression, not vandalism.

The Fine Arts Building’s graffiti stairwell is an underground attraction on NKU’s campus, and faculty of SOTA are discussing various ways to make the infamous stairwell presentable.

“We want to make this a place that makes us proud to display to parents and visitors, not embarrassed,” Lisa Jameson, visual arts program head, said.

Jameson maintains a passion for street art and self-expression, but for her, the graffiti hallway is different.

“It makes me sad because the art is so badly done,” Jameson said.

She said she would like to see the hallway covered in art that provokes thought and holds an artistic commentary relating to social justice, politics or current events.

One idea, proposed by Jameson, could solve the issue for students and faculty alike.

Her proposition will showcase student street art, and is intended to be directed by students as well.

The plan entails that the stairwell be completely painted over to free up the entire space for art. Students will be allowed to submit their ideas and plans to the student-led board to gain approval. Once approved, students will be allotted specific space along the stairways to compose their pieces.

In 2014, NKU hosted GraffitiFest, where 12 local artists created graffiti art live for the crowd while maintaining the assigned theme. The pieces were auctioned off and the proceeds were donated to four organizations—American Red Cross, Visionaries and Voices, Revive the Heart and ArtWorks. A theme idea has been incorporated in the proposition, but isn’t fully established, as of now.

Jameson has been on campus since 1996 and doesn’t remember the stairwells being vandalized until 2009, when she first started noticing graffiti. She said that the issue has only worsened in the past five years.

NKU Chief of Police John Gaffin said there’s a common misnomer on campus that the Fine Arts Building is fair game for students to tag.

“I think there might be a perception that there is a tolerance or has been a tolerance in the past for this sort of activity in that specific location,” Gaffin said.

Jameson said that the attitude toward the vandalism will no longer be one of tolerance.

“Destroying our campus for one’s own artistic expression is not for the better; it’s actually illegal,” Jameson said.

She said that SOTA will seek criminal punishment for anyone participating in the vandalizing of the building.

“There’s a thin line between street art and vandalism—this is vandalism,” Jameson said,  as she flipped through some of her favorite street art pieces.

Since the increase in vandalism, the Fine Arts Building has been fitted with security cameras to monitor the stairwells 24/7. The penalty, if caught tagging, could carry fines and the possibility of jail time.

Jameson said that she doesn’t want to see any students in legal trouble, especially if the student feels like they were expressing themselves.

“We do want to make it work for the sake of artistic freedom and creativity,” Jameson said. “But the free-for-all we have occurring now isn’t producing street art—it’s producing junk.”This problem, as explained by Jameson, isn’t only superficial.

Jameson cited an article from Science Direct, which showcases a study done in major cities like New York City called the ‘Broken Windows Theory.’ The study showed that having visible graffiti could increase the number of potential people vandalizing. Jameson’s fear is that one day, the Fine Arts Building will see the same results if the issue isn’t resolved.

A rise in crime isn’t the only repercussion of vandalism; it can be a financial burden as well, according to Gaffin.

“The primary negative is the impact to the overall appearance and environment as well as the cost incurred cleaning or painting over unauthorized graffiti. Higher costs ultimately trickle down to tuition dollars,” Gaffin said.

While this proposal gains momentum and works its way through the ranks, not everyone is a fan. Chris Whelan, junior visual communications design major, said, “It’s cooler just knowing it’s not supposed to be there.”

Whelan said she loves the spontaneity of the stairwells.

“I think it’s cool, just a cluster of people being creative, and the proposal is a little more lame than allowing people to do what they want,” Whelan said.