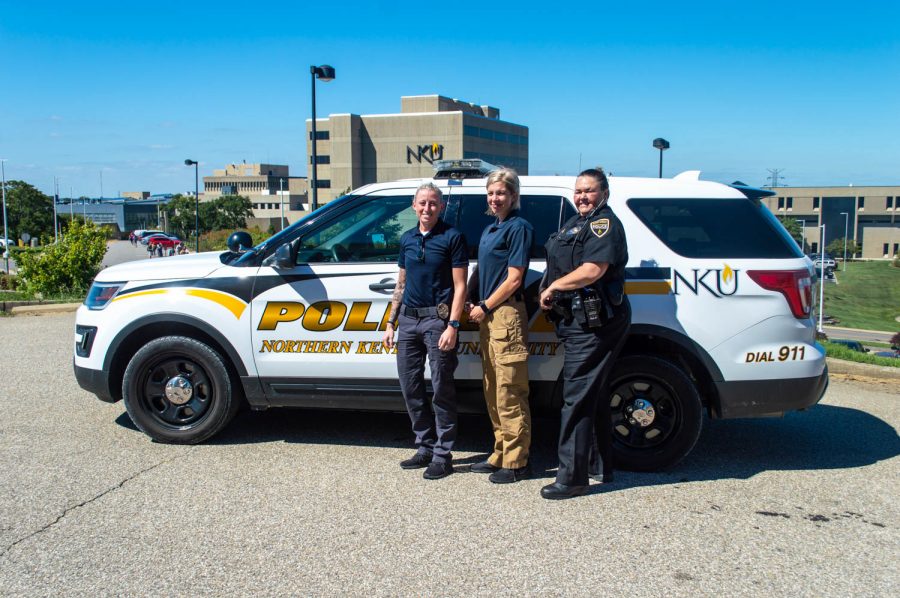 Law enforcement runs in the family for Ruehl, community resource officer, with her father being an officer. Ruehl said her original plan was to become a park ranger, but she settled for going camping on her days off instead.

Ruehl worked at Kenton County Sheriff’s Office for 13 years and Lakeside Park Crestview Hills for two and a half years before being recommended to apply to work at NKU by her friend of 16 years, and fellow officer, Heather Mitchell.

Patrol Officer Mitchell has been with NKU since February, but in the field for 21 years. After meeting her husband at the police academy, she moved from Henderson, Kentucky to the Northern Kentucky area and worked in Butler, Kentucky briefly, but spent most of career at Taylor Mill, Kentucky. Mitchell said law enforcement was a natural career choice for her.

“Being in law enforcement was something that always was interesting to me growing up,” Mitchell said. “I’ve always been the one to kind of stick up for the little dog and be a protector.”

Officer Recruit Amber Ford is new to this field, having not gone to the academy yet. After working at the Campbell County jail for two and a half years, Ford was looking for a job with a more positive atmosphere.

“It’s interesting; it’s exciting. I feel like this was the career choice for me,” Ford said.

Mitchell and Ruehl both agreed that university policing is very different than city policing.

Ruehl said rather than looking for a bad guy, the focus is giving students a good experience and improving their interactions with law enforcement.

At her previous agency in Taylor Mill, Mitchell worked as a school resource officer for five years. Mitchell said working with the youth was something she loved and now misses.

“I loved working with the students … building a rapport with the younger generation,” Mitchell said. “Getting them to see that cops are human too, that you don’t have to be scared of us— we’re good, decent people.”

While Ford does not have experience in city policing, she said one thing about NKU that differs from her previous job is the diversity of the people she is working with. Mitchell said that the mix of people and personalities was also very appealing to her.

Law enforcement is historically a male-dominated field. According to a 2017 report by the FBI, 12.8% of officers are female.

When Ruehl was pregnant with her first child, she said there was no policy or plan—it was her responsibility to figure out one. Ruehl said it was a gray area for all involved.

Mitchell shared a similar experience while planning to have her second daughter. Mitchell had gone to her chief ahead of time, but being a 10-man agency, she was aware of the burden her absence may put on them.

Mitchell wanted to work the road as long as possible, and did until she was five or six months pregnant, but said it was challenging to navigate the best plan for both her and her agency.

“I would say that it’s probably one of the more challenging things for an agency and the female officers, finding that balance,” Mitchell said.

Another challenge came in the form of difficult coworkers, something all three women had experience with.

Ruehl shared an experience she had near the beginning of her career while working at the same agency as her father.

“I worked with a very difficult coworker who did not want me there. First off, my dad worked there. Second off, I was a female,” Ruehl said, “He just thought I must be the most spoiled. Everyone’s gonna cater to me.”

Mitchell said another challenge female officers face is feeling the need to prove themselves more than their male counterparts, especially early in their careers. Mitchell said this can make female officers put themselves in dangerous situations out of the need to prove themselves. In her case, she would often not request backup when she would go to alarm drops—scenes where automatic alarms have been triggered—as most of them were false alarms.

But these alarms had a very real possibility of being serious situations at any time.

“I got to thinking about it after a while, I’m like ‘the guys call for backup.’ Why should I have to feel any differently?” Mitchell said.

Female officers do bring another perspective into a situation, Mitchell and Ruehl said. Ruehl said female officers usually have a strength in “softer skills.” For example, de-escalation.

“Having that nurturing, motherly—kind of—feel about us. People do tend to open up to us sometimes a little more,” Ruehl said.

Mitchell said often on domestic violence scenes, men would be more likely to speak to her then a male officer. Mitchell would find herself having a situation handled, but just the presence of another male officer on the scene could sometimes cause the other male to “explode.”

“I think that women tend to have better communication skills and not always, but we can talk people down,” Mitchell said.

“My most rewarding [experience] is just working with the youth and building a rapport and basically watching them grow up into good citizens,” Mitchell said.

Ruehl is a self-defense instructor and said the change in women’s demeanor before and after the class is the most rewarding for her.

“I think that’s definitely my most rewarding [experience] is seeing women come in at the beginning of classes, shy and quiet and just nervous and think ‘Why did I sign up for this?’” Ruehl said. “And then by the end of the week, they’re loudmouth, ready to fight. They’re just ready to show all the skills they learned to see the confidence when they leave on that last night.”

Ford is new to her career in law enforcement and doesn’t have much experience yet, but said during her time working at the Campbell County Jail, some of her talks with inmates were rewarding.

“You got all different kinds of people coming in and a lot of them don’t have places to go. They haven’t had a very good lifestyle,” Ford said. “Just by sitting down and then talking to you, talking about different paths in life and stuff, they felt okay, they felt like …  they’re going to get out, they’re going to do better.”

While being in law enforcement does take up most of their time, all three women have hobbies and de-stressors outside of work.

Ford is not married and does not have any kids, unless you count her three dogs—a German shepherd-Labrador retriever mix, a labradoodle and another little dog that belongs to her girlfriend. Ford also stays active and enjoys kayaking and hanging out with friends, as well as taking her niece and nephew to their favorite place, Chuck E. Cheese’s.

“I’m always doing something and never just sitting around at home,” Ford said.

Mitchell has two daughters—one is a junior in high school, and the other is a college student at the University of Louisville.

Between taking their high school daughter to her club volleyball games, Mitchell and her husband, a fellow police officer, spend a day—or two—off visiting their daughter in Louisville.

As for her future, Mitchell has one thing to look forward to.

“And looking forward to retirement here in a year or so … we’ll see,” she said, as Ford and Mitchell voiced their protest.