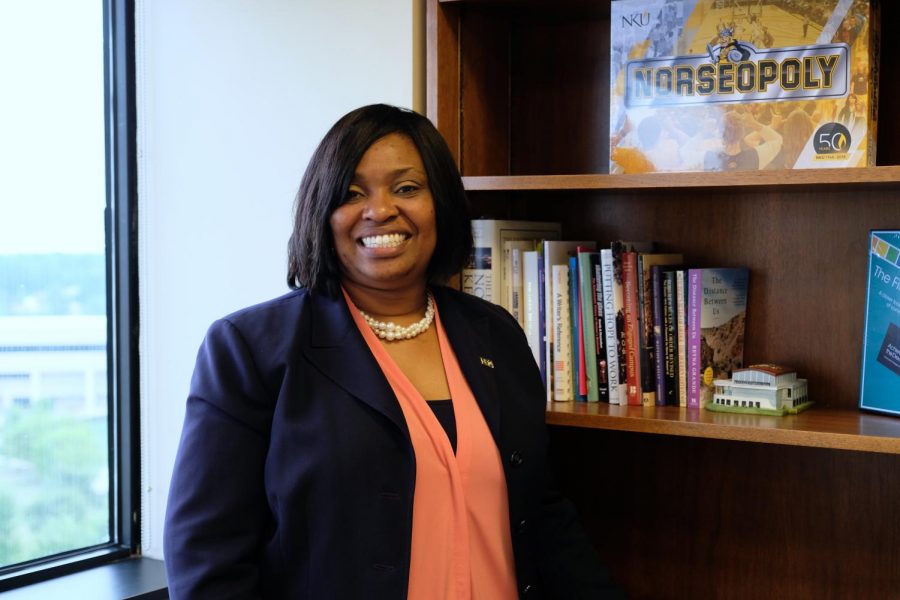 Bonita Brown, NKU’s vice president and chief strategic officer, believes Success by Design could be a model for colleges across the country

NKU made public Success by Design in April 2019, which will serve as its strategic framework for the next three years. NKU’s goal is to increase access, achieve higher levels of completion and advance opportunity for career and community engagement.

To lead this campus-wide initiative, President Ashish Vaidya created the position of vice president and chief strategic officer. He selected Bonita J. Brown, former vice president of Network Engagement for Achieving the Dream, to oversee the execution and implementation of the strategic framework.

“[This new position] is going to be the central part of the facilitation, connections, building coalitions, building consensus, moving the agenda and—essentially—delivering on the results,” Vaidya said.

According to Vaidya, Brown is going to play an essential role in the Success by Design framework.

“I am very excited. I think what excites me the most is that the energy around the strategic plan. I was worried … we can’t be going through this with people burnt out, or if they don’t believe in the mission—but that’s just not the case here,” Brown said.

Brown said she wants to remove the internal barriers that students face. She gave the example of a first-generation student getting lost in the “alphabet soup” language barrier found across campus.

“‘What’s a Registrar? What’s ‘mynku?’ We [universities] speak in a whole different language, so we want to remove barriers [like this] so that students can navigate,” Brown said.

If students can navigate, they won’t get frustrated and they’ll graduate—which would improve the graduation rate, Brown said.

“If we do this right, I really think we can not only increase the graduation rates here and the success of our students, but we could lay a roadmap for other universities that are similar to us,” Brown said.

Brown said she agrees with Vaidya’s want for the college to be student-ready. This means that whenever a student enrolls at NKU, they should be able to come in and successfully navigate a path to graduation—getting the degree they want in a reasonable amount of time.

“It shouldn’t take you six years, if you really want to get out in four,” Brown said.

“If not, I love the President’s statement when he says, ‘fail fast and move on.’ If it’s not working, we can adapt, we can adjust and we can make it fit in NKU,” Brown said.

“That’s what attracted me to the entire plan … [Success by Design] sends the signal to everyone around that we’re serious about this,” Brown said. “I think the success of this, versus others, is going to be how much everyone gives—how we can stick with it when it gets hard and challenging.”

Brown said she wants to remind NKU the reasons behind Success by Design are student-centered and that they have to look at it from the students’ perspective. According to Brown, just because it’s in an implementation phase doesn’t mean Success by Design won’t need input from students.

“As we’re coming up with ideas … I want to run it by students—so students can tell me ‘No, that makes no sense. Why would we do that?’” Brown said.

At one of Brown’s previous jobs, her boss would keep a cut-out of a student in the middle of the table while her boss said, ‘This is why we’re here—everything we do is about the students.’

“On the national scene, there’s a lot of potential for NKU to make a splash—if we do this framework right,” Brown said.

Part of Success by Design’s plan includes partnering with local companies to provide internships, scholarships and helping develop programs—alongside giving credit for prior learning and work experience. However, Brown thinks one size doesn’t fit all.

“Partnership is just not one simple definition,” Brown said. “We can be creative, we can be innovative, we can think outside of the box—which inspires me.”

Success by Design was made to impact staff, faculty, students and alumni . Part of their role would be to mentor students, but Brown said she wants them to do more than that. She wants to see them stick with a student all four years—not just one meeting. That includes taking them out for coffee, helping them practice interviewing and connecting them to other people.

Brown said she believes the American Dream could slip away from the average person, and that, even if you do get a four-year degree, it may be hard to find a job to support your family. She believes that if NKU doesn’t fix this and address those affected by it in the region, the region won’t thrive.

“I think NKU is vital to that [regional] success, because we’re producing future employers, we’re producing the future leaders of these organizations,” Brown said. “If we don’t get the educational piece right, the whole economy of the whole nation is going to be in jeopardy.”

Brown said she envisions NKU—faculty, staff, students and alumni—as stewards for the university and for this region. According to Brown, if NKU belongs to the region, it belongs to the community too.

“I think [community visibility] is probably what this university has been struggling with for many years,” said Brown. “A lot of people know NKU, but they can’t really tell me a lot about it—that tells me we need to tell our story better and more often and in more places.”

According to Brown, it will take time, but the more involved NKU is with the community, the more ownership it has.

To achieve NKU’s insertion into the community, Brown hopes to get more people on campus for events—whether it’s the arts, public speakers, lectures or athletics—she thinks if you can find ways to get the community here, then eventually NKU will see the turnover.

“I’m looking forward to NKU having a larger imprint in this area, crossing the bridge into Cincinnati,” Brown said. “Expanding that footprint to have a real impact on this region so that everyone knows that NKU is here.”