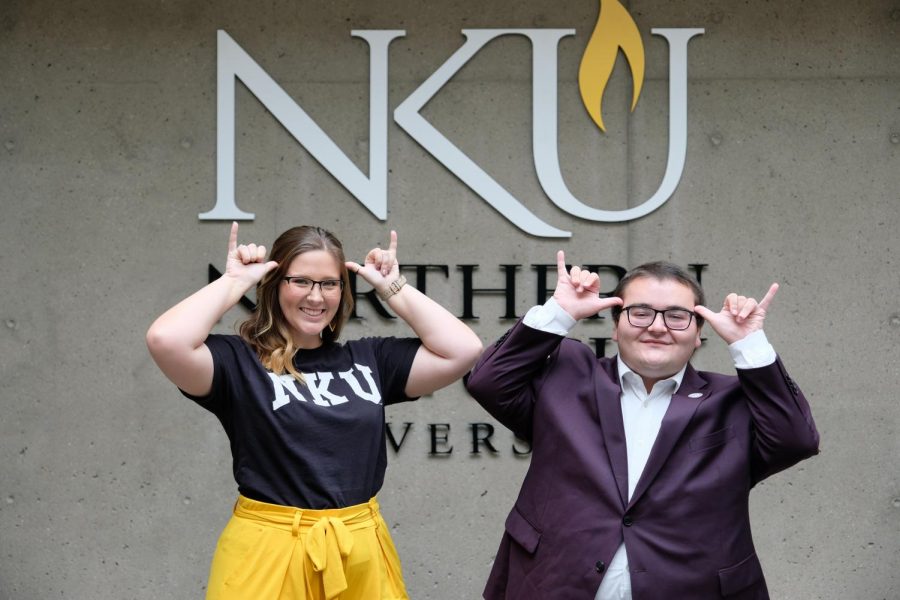 A conversation with SGA 2019 President, VP

Jarett Lopez, senior political science major, and Shelby Sanford, senior public relations major, were elected SGA president and vice president for the 2019-2020 school year in March. They received 366 of the 814 votes by campaigning on what they believed were tangible goals, like nixing the “A-” and creating a legislative liaison position in SGA.

Obtainable goals come from creative solutions—so The Northerner sat down with NKU’s newest student officials to talk about their plans for the year to come.

The Northerner: How can SGA get rid of the “A-”?

Jarett Lopez: “We adopted the ‘A- in 2008; it was effective in 2009. The Faculty Senate vote on that measure was 18 to 10, which sounds like there were a lot of abstentions … There was a report that was released by WKU’s Institutional Research—they were going to adopt the ‘plus, minus system’ around the same time we were. But, they found that it would hurt 30% of students and their GPA … We believe that students who are getting 90% of the points in a course should be rewarded and not punished when it comes to GPA calculations.”

N: For the students that are really trying, what does that “minus” do?

SS: “Another thing is that when students are looking into grad schools, law schools, medical schools, that’s a huge difference in GPA. And, a lot of cases like that can knock students out of the running. When you look at some of the other regional universities who don’t have that ‘plus, minus system,’ it puts our students at a disadvantage because we do put that system into place. You have to look at how big of a factor that is in their GPA.”

N: You also talked about having more access to mental health and wellness features. Do you think that’s still something that’s a high priority? Is it something that you guys see affecting this semester? Next semester?

JL: “Mental health is an issue that affects people every day. Because it affects students on such a grand level, it’s a priority of ours. Our resolution that we passed last year, under Hannah Edelen, to diversify the [Health, Counseling & Student Wellness Center] has been well received … but we campaigned on mental health days for students and I just saw a university that recently allowed students to get an excused absence—mental health days for anxiety or depression. I would love to see that adopted here. And, while the conversation hasn’t exactly started around that, it would be an easy conversation to have.”

N: Any other ideas or things that have caught your ear over the summer that you might want to start with this semester?

SS: “One of the things that I sent [Lopez] over the summer was that … for students that have diabetes, that have to administer injections and stuff on campus. Safe boxes, it’s in bathrooms where they can dispose of their needles and stuff … but that’s definitely something that someone doesn’t deal with those issues that you don’t really think about. But there’s probably a significant amount of our students that do have to deal with that every single day on campus. So, that should be made easier for them.”

N: Do you think you can actually get a legislative liaison position within your organization?

SS: “I definitely think we would have the administrative support. I think that’s a very, very, very important student position now, and I think it would obviously have to be a very serious process about who would get that position.”

N: If you could give some advice to new students, what would it be?

SS: “I can say that, coming to NKU, I knew that getting involved was going to be the way that I was going to be successful. You see that in all of the research that we do on our campus, and on every other campus, it shows that if you are involved on campus, your grades are significantly better, your mental health is better. Being involved is the best thing you can do for yourself as a student.”

JL: “Even more important than that, I think that every freshman should know that they need need to build a relationship with their faculty. I would not have made it this far if it weren’t for the faculty that I’ve connected with—that I can go to their office and just sit and talk and complain about my day, or complain about an assignment, ask for help.”

SS: “We want students to reach out to us and give us their input and their ideas. You don’t have to be a senator in SGA to tell us what you think SGA needs to be working on. That’s something that, if I could tell that to every single freshman that was walking in the doors NKU. Tell us the changes that you want to see because that’s what we’re supposed to do.”