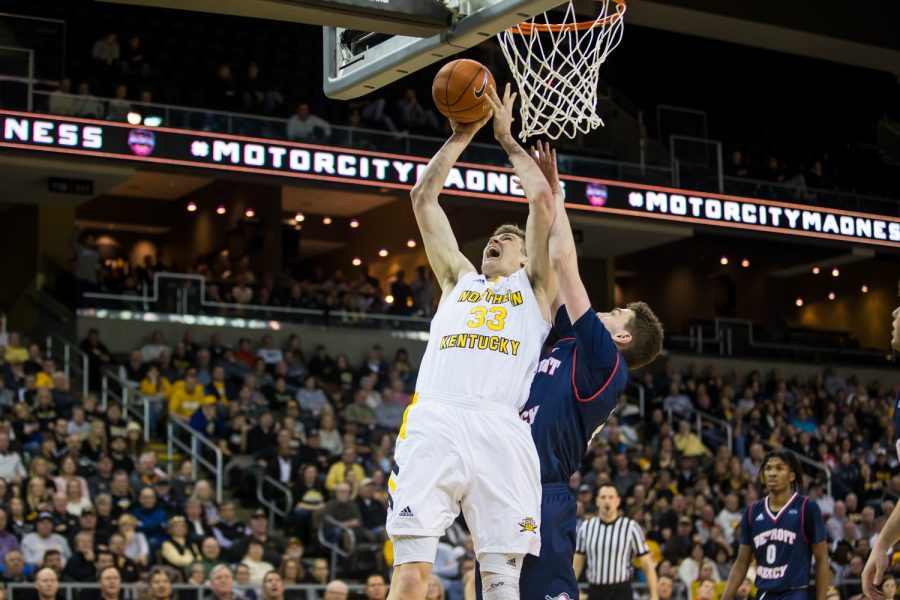 Chris Vogt (33) goes up for a shot during the Horizon League Tournament game against Detroit Mercy. Vogt shot 7-of-10 on the night and had 16 points.

NKU center Chris Vogt is officially not returning to the men’s basketball team next year, he announced on Twitter Friday.

“I truly believe that Coach Horn will continue to build on the traditions and success at NKU. But, it’s not the staff I committed to and it no longer feels like the right fit for me. I wish everyone here nothing but the best,” Vogt said in his statement.

During his sophomore season, the 7’1 center from Mayfield, KY played in all 35 games of the season, and joined the starting lineup for two games. He averaged 4.5 points, 3.7 rebounds, and 1.2 blocks per game.

He achieved his best performance at NKU with a double-double of 20 points and 14 rebounds in a home game against Green Bay on January 24th.

Vogt was integral to NKU’s first victory at Motor City Madness versus Detroit Mercy, posting 16 points and eight boards with 7-for-10 shooting.

Coming in to NKU as a freshman, Vogt was a three-star recruit, according to ESPN, Scout.com and 247Sports. In high school, he posted a Kentucky statewide record with 17 blocks in a game. He finished that game with a triple-double of 16 rebounds and 12 points. Vogt also holds the Kentucky record for most blocks in a high school season with 190.

“I want to thank my teammates, former coaches, staff, and fans for shaping me into the person and player I am today. You all are what makes Norse Nation so special. Northern Kentucky will always be like a 2nd home to me,” Vogt said in his statement.