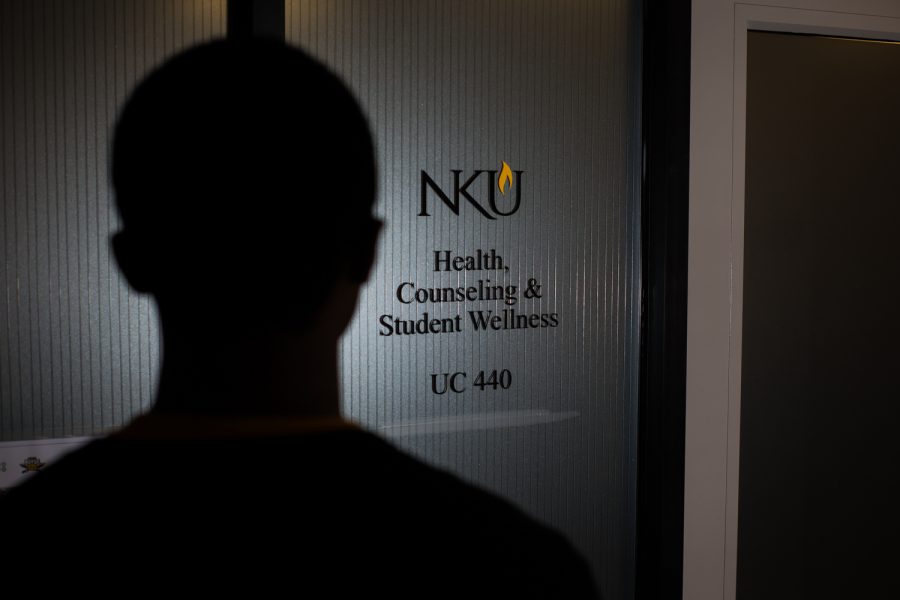 “I think a lot of black people see that when they go to therapy they want to talk and then someone’s jotting down notes like, ‘This is an excuse why you can’t get this done.'” – DeShawn King

With only one in three African Americans receiving mental health care who need it, according to the American Psychiatric Association, this issue may be larger than NKU.

Brown was inspired to write the resolution because he said that mental health has always been something he has been passionate about because it has impacted his life.

“It’s directly affected me growing up because my grandma is schizophrenic,” Brown said. “That’s had a really heavy impact on me … some people who aren’t close to [mental illness] tend to look over it, especially in [the African American] community.”

After doing some research, Brown realized a lack of diversity in counseling services possibly reached beyond just NKU and other college campuses, but society as a whole.

When writing the resolution, Brown had many students with various backgrounds come to him with their experiences.

“One thing that writing this resolution has taught me is that everyone goes through [personal battles],” Brown said. “Initially people in my community came to me, but then once I started talking to more people, it affected people like [people who are] LGBTQ+, it affects people who are Latino and affects international students who have language barriers.”

Kennedy Woodall is a student at the University of Cincinnati and the leader of UC’s chapter of  NAACP. She says that students came to her similar concerns about UC’s Counseling and Psychological Services (CAPS).

While CAPS does have one counselor of color, Woodall said students still felt discouraged.

“[My friend] was just kind of discouraged from going to CAPS to seek help—just because not only was it not helping, but the person who was representing her wasn’t really giving her any advice or coping techniques that were appropriate for her situation.”

Woodall got in contact with her friend and NKU student Luke T. Kues when she heard of the writing of Brown’s resolution.

Kues helped Brown write the resolution after a member of Kues’ fraternity, DeShawn King, came to him after a counseling session and said per the resolution, ”I felt like I wasted 15 dollars and an hour of my time explaining my blackness to a white woman, and at the end, she told me I only had 13 more sessions.”

Kues said this moment stuck with him and inspired him to begin writing the resolution with Brown toward the end of last school year.

“I never, even as a white person, thought about that being a problem … So I started talking to people started making phone calls started asking around, like ‘What we can do about this?’” Kues said.

Kues said he wants NKU to hire a therapist with visible diversity, as well as provide resources to any and all minorities—possibly through outsourcing to other therapists in the area at an NKU rate ($15 per visit).

‘How does a white woman understand my experiences?’

King said that the process of getting into counseling and scheduling an appointment was easy. What was not easy, was having to explain his background repeatedly.

“I had to do a lot of explaining on backstories or explain why people think a certain way or why the reason why I felt that way,” King said.

He gave a specific example of the feeling of anxiety when getting pulled over as a young black man.

“There’s some stuff you just, you know just being that person or being [black] … you were raised a different type of way, you grew up with situations like that,” King said.

There is a large stigma surrounding therapy in the black community, according to King; he had to face the stigma himself.

“Because for the longest I thought that those thoughts were what white people did,” King said. ”Because you never really hear about a black person killing themselves.”

King worries that someone who does not understand his background may believe what he is saying is an excuse.

“I think a lot of black people see that when they go to therapy they want to talk and then someone’s jotting down notes like, ‘This is an excuse why you can’t get this done,’” King said. “Because it looks like an excuse to you, but you didn’t grow up that way.”

King started a program last year through Black Men’s Organization called Young, Black & Suicidal in which he invites speakers to give talks about mental health in the black community. King hopes this program will encourage others to speak openly about their experiences.

‘Closest thing you will get to therapy is talking to your pastor.’

After an appointment with a therapist to decide whether or not the group therapy would be a good fit for her, she received an email saying she had been added to the group with a list of date and times.

During her time in therapy through NKU’s counseling services, Ajagbe said she never felt like she didn’t belong there.

“I wouldn’t say that from my place, and where I sit, I got any type of negative feeling like I don’t belong there or shouldn’t knock on the door or anything of that nature if I needed somebody to talk to.”

Ajagbe described the members of her group as diverse. The group consisted of about eight to nine people, with four to five consistent members.

Ajagbe is originally from Nigeria and said therapy is not something necessarily talked about.

“It’s not something very talked out, its something that’s really out there. Closest thing you will get to therapy is talking to your pastor,” Ajagbe said.

She is currently seeking therapy outside of NKU. Ajagbe’s current therapist understands a lot of her cultural challenges she said.

“Even though she doesn’t completely get it, she gets the concept of it,” Ajagbe said. “As soon as I told her the whole culture thing, she was like ‘oh yeah I get that’ … It felt like the sun came out.”

While she thinks it’s possible a therapist at NKU could understand her experiences, Ajagbe understands the importance of talking to someone similar to you.

“Whenever you are going through something and you sit down and there’s somebody across from you that looks like you and understands your history, understands your everything … and you’re able to have that common standing, anything that you can grab hold of, it just makes it easier to open up and talk,” Ajagbe said.

Lisa Barresi is the co-interim director of counseling at NKU’s Health, Counseling and Student Wellness office (HCSW). She has been with NKU for over 20 years.

”We haven’t had a lot of applicants over the years. That’s a really hard, bigger systemic issue,” Barresi said.

Therapy is about the relationship you form with your therapist, according to Barresi, not how similar your experiences are.

“There are many students over the years that what I’ve seen them for I have not experienced. That does not mean I could not be helpful to someone,” Barresi said. “What I really think [therapy] is really about is the relationship, it’s about building rapport with someone, it’s about being empathetic and understanding … that I think is really the cornerstone of really helpful therapy.”

Barresi and the HCSW office were not involved in the writing of the resolution and do have some concerns with how it was worded.

“There’s implications there. The way [the resolution] was written to me implies that counseling services isn’t providing that and that’s inaccurate,” Barresi said.

Barresi noted that there is always room for improvement.

“We’re always wanting to improve our services, and improve what we can do to help us be an exciting place for all students,” Barresi said.  “And we know that that’s a continual effort.”