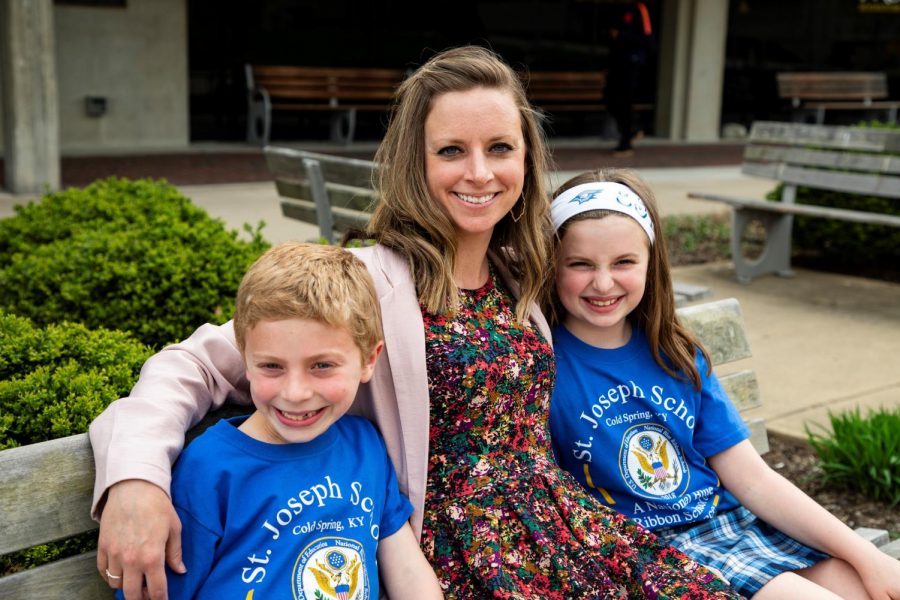 Amy Danzo, working mother and NKU employee, said family is her number one priority and encourages her staff to value it the same.

For Amy Danzo, there is no such thing as a work-life balance. As a working mother, the “scale” always tips one way or the other, “even hourly.”

“It’s no question that being a working mother is a struggle and a triumph all wrapped up into one, deeply unorganized package,” Danzo wrote in a blog post. “For a woman to say that she has an equal work-life balance would indicate that she is unaware of how unbalanced her work-life really is.”

Danzo, director of testing services at NKU, has had all three of her children while working in higher education. Although being a mother and working a job she loves will never totally balance out, part of trying to find a happy medium is being vocal about the respect she expects from her employer.

“With every new boss that I have been assigned in the past five years, I have a ritual,” Danzo wrote in her post. “In our first meeting, I slide them my flexible work schedule agreement and state that being a mother and raising fine, empathetic, critically-thinking children is my number one priority.”

The issue of parental leave is not the whole of the problem. Danzo sees it as a multi-level issue; past the basic difficulties of getting time off work during pregnancy, there is a whole set of issues that come with being a working parent.

“I tell every new mom that the number one biggest stress of being a parent is child care,” Danzo told The Northerner.

Danzo also explained how expensive child care can be. This can be especially challenging, she said, when you’re working in higher education, because the motivation there is based more around intrinsic factors than pay.

“One of the reasons why moms don’t go back to work is because it would not be worth it with the amount that they would have to pay in child care,” Danzo said.

In addition to money constraints, leaving your child as a new mother can also be an emotionally taxing experience.

With her last baby, Danzo can’t remember anything she did for the first year of her daughter’s life other than worry about her. Although some may think a mother would become more callous to leaving their children behind to go to work, Danzo said the opposite happened.

“I got even more sensitive to going back to work with each child that I’ve had,” Danzo said.

In addition to the pain that comes with having to leave your child behind, Danzo talked about the difficulties and complications that come with being a parent and being a full time worker.

For Danzo and her husband, it was harder to find people to take care of the kids because they’re from out of town and don’t have immediate family nearby.

“We’re very much half and half,” Danzo said. “We split childcare responsibilities parenting … we have friends that we’ve met over the years that we can call on in a pinch, but it’s kind of different.”

She also highlighted how complicated the issue of breastfeeding can be when women are forced to return to work so soon after their child is born.

“Even at three months going back, your employer has to be flexible,” Danzo said. “If you want to continue to breastfeed, you have to be pumping at least two times a day, which takes from start to finish 20 minutes, at least. Because you’ve got to prepare it, you’ve got to actually do the pumping session and then you’ve got to store the milk and clean up the apparatus for next time.

“And then you do it all over again.”

The issue is even further complicated depending on the work environment. Although some women might have the luxury of an office with a closed door, others may just work in a cubicle and not have the accessibility to privacy.

When considering how much goes into successfully breastfeeding, in addition to all the stressors that surround being a new parent while also working full time, some women abandon breastfeeding altogether.

“A lot of women cannot follow through with breastfeeding because they have to go back to work and their work environment does not allow for them to have a successful pumping session,” Danzo said.

All the factors surrounding the issue can be overwhelming for new parents, and Danzo thinks a huge component to being a successful working mother is getting flexibility from your employer, which is something Danzo prides herself in granting to her staff members.

As a working mother herself, she is even more able to be empathetic to their situations.

“I think me and all of my staff knows that family is number one to me. And if they want it to be number one to them as well, I will support them 100%,” Danzo said.

Danzo thinks a lack of standard leave policies and inflexibility in the workplace not only affect individual women, but also detracts from the workplace as a whole.

This not only affects specific organizations, Danzo believes, but spreads into the wider community.

The intentions of women on maternity leave “are to come back and to contribute to NKU and the region. And to the government as a whole as a person working citizen. So you would think that you would want to encourage that through offering some sort of paid leave,” Danzo said.

Despite the hardships of furthering her career while grappling with motherhood, the lessons she’s learned doing both have helped her grow as a person.

“Being a mother has helped me 100% in being a better boss: I’m more patient, understanding and empathetic,” Danzo said. “I know that mistakes are part of the learning process.”