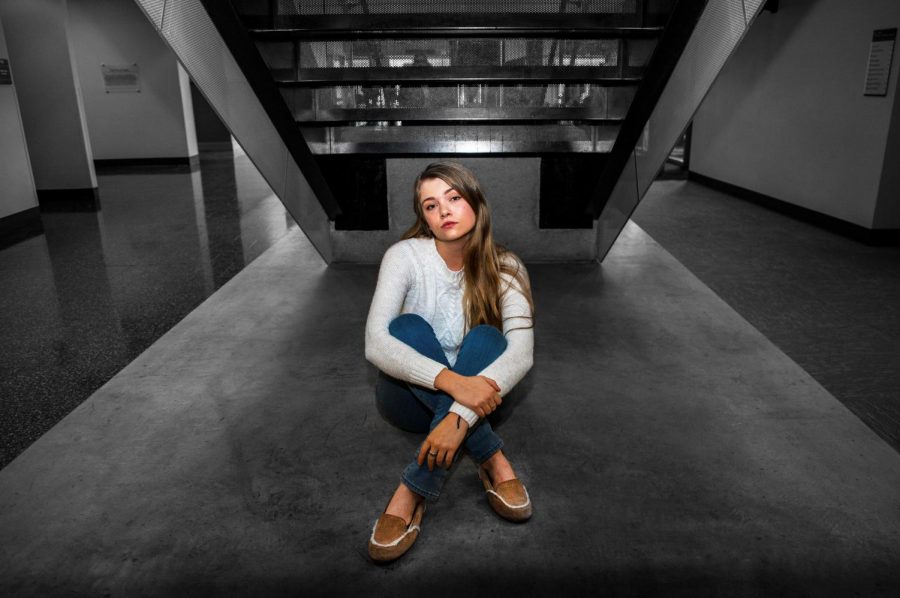 DISCONNECTED: How one NKU student gave up social media and found herself

After grappling for years with her relationship between social media and her own self worth, Carley Lampke decided that in 2018, she was going to disconnect.

For many young adults, identity in the real world and online persona are not simply cohabitants, but are interwoven. While social media has powerful abilities to connect, it can also leave users placing their self-worth on the approval of others through these online communities.

A string of revelations

Giving up social media came to Lampke as a series of “ah-ha” moments—revelations about herself and what she would describe as an unhealthy relationship with social media.

In November 2017, her first “ah-ha” moment came when she realized she was experiencing a decline in her mental health and spending much time fixating on her online image. She then talked with her mom about taking a step back.

“I just was like, ‘Who am I? What am I doing? Why am I trying to impress people who I will not see?’” Lampke said.

Lampke’s high school best friend Jessica Broering was shocked when she heard the news because Lampke highly values connection with others. Still, Broering believed in her ability to accomplish the goal.

“I had no doubt in my mind. When she sets her mind to something, there’s no stopping her. She’s going to get the job done no matter what she wants to do,” Broering said. “…She can do anything, pretty much.”

Lampke also had the support of her boyfriend, Hayden Haas, who gave up social media alongside her.

“I would say it’s just grown us closer because she’s not really on her phone as much,” Haas said. “Neither of us are really on our phones.”

From force of habit, Lampke found herself getting on the app and quickly getting off during the first few months. Not only did she feel withdrawal from the platforms, but she suddenly had extra free time she could start utilizing.

“I’ve always felt like I wasn’t living life … but now that I’ve subtracted something that was so big out of my life, I’ve been able to redirect my time and attention to things that I’ve wanted to do,” Lampke said.

Redirecting her time included doing things like walking her boyfriend’s dog more, talking to her mom and researching topics she had always been interested in.

Further, she began making genuine efforts to reach out to her friends, as they were no longer readily available. This was also one reason why Lampke originally decided to keep Snapchat, as so many of her friends directly communicated on it.

“[It] made our relationships stronger themselves,” Lampke said. “I wasn’t just commenting on their picture along with 20 other followers, ‘You look cute.’ I would text them and say, ‘Hi, I’m thinking about you today.’

“And it strengthens relationships, it makes them more personal.”

Her second “ah-ha” moment came when she realized she had separated who she was as a person from her online entity.

“It was hard because I was constantly feeling like people were going to forget who I am,” Lampke said.

But when she replaced her value in the “support” she was receiving from others with the genuine support of her friends, family and boyfriend, the need for attention from social media seemed “arbitrary.”

“By the seventh month, I just had no desire to get on it. I just had completely become comfortable with the attention I was getting from my loved ones,” Lampke said.

Along with her detachment from the platforms came a further realization—her final “a-ha” moment—when Lampke discovered her presence online was not as valued as she previously thought.

“I was like, ‘Jesus Christ. Nobody cares about me as much as I think they do,’” Lampke said.

In addition to the false sense of importance she received, Lampke noticed a reduced accountability on social media due to the screen in between two individuals.

“You don’t have to basically live up to the consequences if somebody comes back at you. You can literally just ignore it,” Lampke said. “But you can say whatever damaging things you want to say to somebody.”

Social media takes away empathy, she thinks, which inhibits the ability to have a genuine connection.

“Your feelings become numb to other people because you aren’t directly seeing their pain through your words or actions,” Lampke said. “So that human connection of emotion is just not transmitted.”

Because she had been on social media since the beginning of her adolescence, Lampke worried about how her life would change when she ended that relationship.

“I gained a ton of friends on Facebook and that gave me a false sense of popularity and friendship at a very young age,” Lampke said. “So, I was already set up in valuing social media followers and likes and statistics in an unhealthy way.”

“[Instagram] started as such an innocent picture-sharing platform for me, and then it turned into a way of unhealthily looking at myself.”

Lampke said as she noticed the platform—and more specifically the explore page—becoming more centered around models, makeup and physical appearance in general, she felt pushed to follow suit.

Because of her own susceptibility to comparing herself to others, she worries about younger people on these platforms.

“I cannot imagine what it’s like to be an 11 or 10-year-old girl and get on Instagram and see those fitness models or the Kardashians,” Lampke said, “…and have the skewed views of how you should be looking at such a young age.

“…That, I feel like, is one of the worst mental parameters you can put on a developing human.”

There has been a significant increase in the young Americans experiencing certain mental health disorders in the last decade, according to research published by the American Psychological Association. This increase, however, is not congruent in older demographics.

“Cultural trends in the last 10 years may have had a larger effect on mood disorders and suicide-related outcomes among younger generations compared with older generations,” said lead author of the study, Dr. Jean Twenge.

Twenge, professor of psychology at San Diego State University, believes the increased use of digital media and technological communication may have a role in the increased mental health issues among young people in America. She also indicated that young people don’t sleep as much, which could also be a contributing factor.

On a smaller scale, NKU graduate students Olivia Johnston and Sarah Lowe have both spent the last year studying how social media affects the mental health of NKU students as a part of obtaining their master’s in social work.

Johnston said after conducting her research with her group, one of her biggest takeaways was that so many people didn’t realize how social media might be affecting their mental health.

“I do think that the majority of the population use it in a negative way and I don’t even think they realize it,” Johnston said. “I didn’t realize that I was comparing myself to everybody that I was following on social media until I stopped and then I was like, ‘whoah, I am a happier person and I didn’t even realize that anything was wrong.’”

Both Lowe and Johnston were surprised when some students reported social media having a positive impact on them, such as promoting more connection in the community.

“I would really like to narrow down the negative impacts of it and the positive impacts and then have a healthy balance of that,” Lowe said.

Johnston said she thinks education is key in making social media something positive.

“If we educate people on how to use social media positively instead of the negative ways of it,” Johnston said, “then I really think social media can have a beneficial effect on all of us.”

“My favorite phrase is ‘zoom out,’” Lampke said. “Just take a visual of yourself from above and value yourself in a way that’s outside the digital world. I think then you get a clear picture of what you should be basing your value on and spending your time on.”

Through watching Lampke’s example, Broering has become more mindful of her social media use. Although Broering hasn’t given up the platforms like her best friend, she said she is more intentional now when she goes to make a post.

Haas—who didn’t use social media until he started dating Lampke—dislikes the fact that our society looks to social media for not only trends, but where our values lie.

“I don’t think social media should set the standards like that, but for some reason it does. Whatever has the most likes is what’s cool,” Haas said.

He said he thinks value in society should be determined by what each individual “can really provide for humanity,” like their motivation and skills overall.

As far as going back to social media, Lampke was forced to return to Facebook due to the responsibilities of her internship, but doesn’t use it much outside of that.

“If something big goes down, I want to see people’s funny commentary on it,” Lampke said. “But I weigh that against what the other detrimental effects that it could have on me if I were to get back on it for a long period of time, and I just know that I’m so much happier with who I am now than who I was when I was using social media.

“So there’s not really a reason to ever go back.”